If the 2018 Alberta budget were a TV show, it would be a show about nothing.

While it depends on some major assumptions, it is unassuming, perhaps even a little bit dull: no massive cuts, but no rainfalls of dollar bills; nothing visionary, but nothing terrifying.

It is, in its own words, a "stable," "moderate," "prudent," and above all, "practical" budget that aims to balance not merely revenues and expenditures, but hopes and realities. (Whether it can actually do so by avoiding the harsh reality of revenue remains to be seen.)

Budget 2018’s utter lack of surprises is … unsurprising. It continues the incremental strategy set out by the NDP at the beginning of its mandate to maintain the quality of life of average Albertans as our province rides out the monumental changes taking place around us. This steady-as-she-goes approach seems almost out of place amid the heightened rhetoric and panicked discourse among opposition parties and interest groups.

In short, the budget is not the apocalypse. In fact, it’s not even Voldemort.

Yet, even as the budget says nothing new, it is still engaged in the construction of a political narrative that is already being shaped ahead of the 2019 election. Narratives, however, can be read in multiple ways. With that in mind, let’s read a few of the most important themes emerging from the budget.

The biggest headlines have zoomed in on the biggest number, and one not actually found in the budget: $96 billion. This represents the total debt Alberta is projected to carry by 2023/24. In a fun twist of mathematics by UCP leader Jason Kenney, that apparently amounts to a 638% increase over the debt bequeathed to the NDP government by its PC predecessors: $11.9 billion in 2014/15. The obvious intent is to overwhelm Albertans with the threat of big numbers (in case you're confused, the $3.7/year in debt payments referenced in Mr. Kenney's tweet actually refers to billions of dollars), yet plays on tired tropes that have been undermined by economists and international financial institutions. Even the International Monetary Fund (IMF) has found that developed countries need not scramble to pay down public debt until it reaches over 60% of GDP.

In raw numbers, Alberta doesn’t even come close to that IMF benchmark, or to the debt levels being carried by our provincial counterparts. 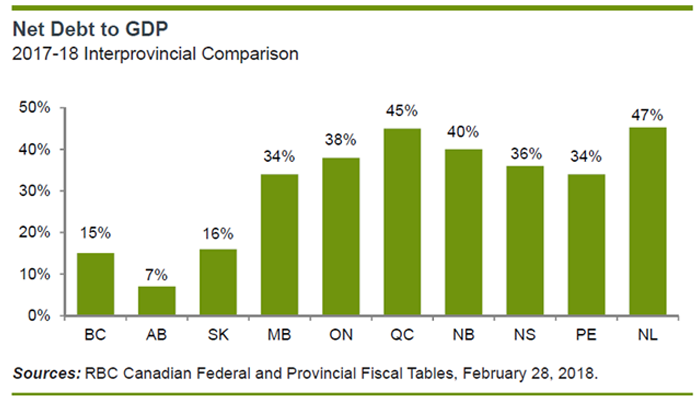 For context, when Kathleen Wynne’s Liberals presented a balanced budget in 2017, Ontario’s total debt stood at $312 billion, with a net debt-to-GDP of nearly 40%.

But the total debt number doesn’t indicate the level of sustainability—even at its projected peak in 2023, Alberta’s net debt-to-GDP ratio will only top out at 13.1%, lower than any other province’s current debt-to-GDP. 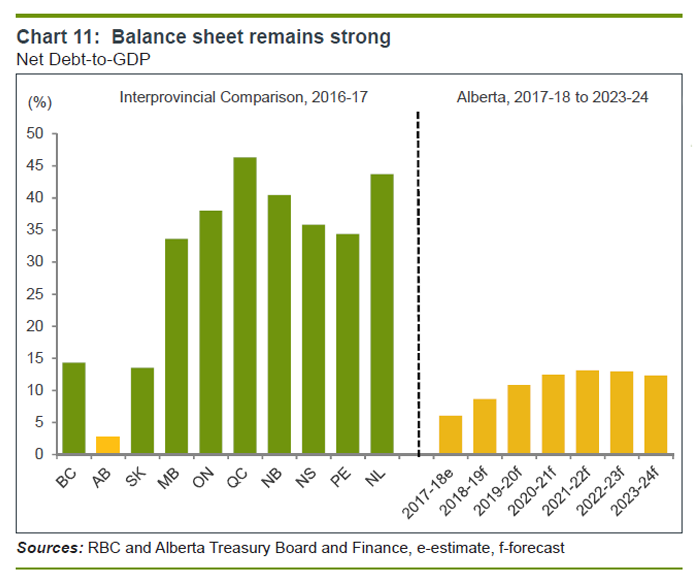 What was surprising is that despite several heavily dropped hints in recent interviews, Thursday’s budget did not entirely live up to Minister Ceci’s promise to lay out "the path to balance." There was no big reveal, merely a projection of a turning point between 2020/21 and 2021/22 in which the deficit would be nearly halved (dropping from $7 billion to $4.3 billion). But because the budget only details a three-year cycle, the specifics of how he proposes to get there remain frustratingly unclear. Optimistic projections based on a triad of pipelines—Trans Mountain, Line 3, and Keystone XL—are not in themselves a plan. Without an in-depth, possibly painful conversation about revenue reform, the path to balance won't be "built to last" at all.

The other keystone (pun intended) in the path to balance is keeping spending below population growth plus inflation—a strategy the government acknowledges specifically in regards to the health budget (which has had its cost curve duly bent from 6.0% annual increases between 2008/09 and 2014/15 to a slim 3.0% in the current budget), but which is less clearly stated with regard to the other ministries. 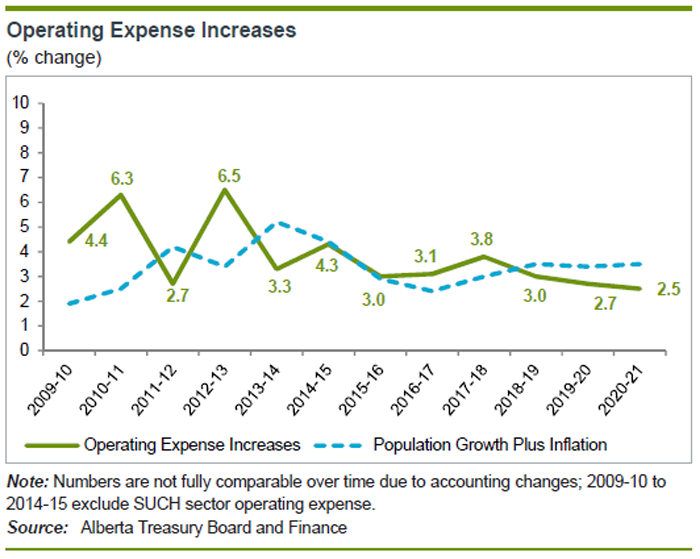 For K-12 education, this means that the government’s commitment to fund for enrollment growth—a 2.2% increase—is actually a 1.3% cut relative to inflation. While the budget commits an additional $461 million (5.2% of the total education budget) for inclusion measures to accommodate students with special educational needs, it doesn't dedicate new money to reduce classroom sizes—a key ask from the Alberta Teachers' Association. On the other hand, given the recent auditor general's report alleging that over $2.7 billion in classroom-size-reduction funding had not been fully tracked or monitored, school boards will likely have to find these resources themselves until a more accountable framework is put in place.

The NDP has, unfortunately, bought into the narrative of a spending problem rather than a revenue gap, but a side-by-side comparison to the 2015 budget introduced by the late Jim Prentice produced by University of Calgary economist Trevor Tombe indicates there is not a significant divergence in spending between the PC plan and the current NDP trajectory. The $8.8 billion dollar gap is almost entirely due to revenue shortfalls—revenues that are unlikely to return at anything near historic levels. 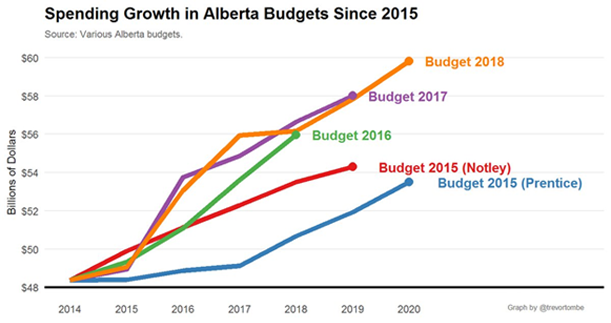 The government is betting on bitumen in pipelines, not cannabis in pipes, to provide increased revenue and reduce the deficit, but neither promises an easy solution to the revenue gap.

For those who may have hoped Alberta could follow the Colorado model, which has yielded over $680 million USD in revenue from cannabis taxes to date, the next few years will be a serious letdown: the legalization of cannabis is set to actually cost the province money—$90 million over the next two fiscal years—before making a small profit of $37 million in the following year.

Budget 2018/19 projects a bitumen royalties jump of 34% in 2020/21, assuming that the Trans Mountain expansion is completed. Yet the economic benefits of the pipeline are being considerably oversold. In a 2017 report for Parkland Institute and the Corporate Mapping Project, earth scientist David Hughes challenged the claim of a "tidewater premium" awaiting Alberta’s bitumen at the end of the pipeline.

While loudly proclaiming the need to "get off the resource royalty roller coaster" and end our overdependence on non-renewable resource revenues, this budget relies on them at its very core. This isn’t new: for every provincial budget of the last 70 years, removing the resource revenues would lead to deficits of a similar magnitude to the one we are currently facing. 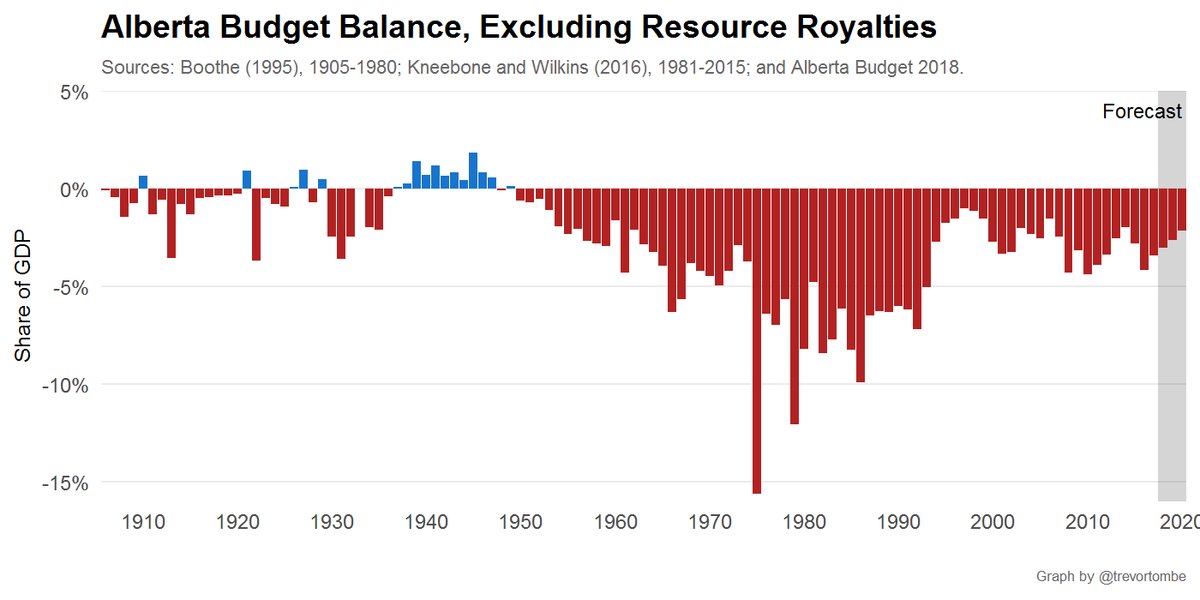 The crucial question is what replaces those revenues, and this is the one question that this budget studiously avoids.

Between 2017/18 and 2020/21, total revenue is set to increase by $7 billion. Half of this comes from increased income taxes (both personal and corporate) and the rest from a combination of bitumen royalties, carbon levy, federal transfers, and investment income. Interestingly, at 17% federal transfers now account for a greater percentage of total revenue than royalties, second only to personal income tax, which makes up 24% of revenues. This ad hoc approach to filling the revenue gap is not the long-term, predictable, and systemic reform necessary to get Alberta’s revenues in line with our fellow provinces. 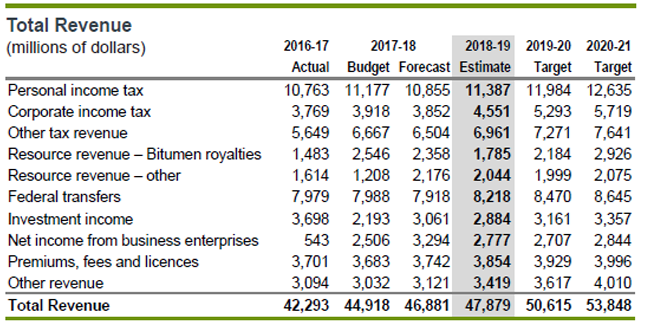 Putting the conservative in progressive?

At its essence, as other commentators have noted, this is a small-c conservative budget: it holds the line on core services spending, introduces no new revenue streams, and doesn’t increase taxes or fees. Its purpose appears to be to maintain the status quo with as little drama as possible. Cost-containment measures are moderate: cleaning up waste in the form of bloated agencies, boards, and commissions, finding efficiencies, cutting executive salaries and perks (the much-derided golf membership is sadly no more). It is also a big-C Conservative government in its "hope for another boom" mentality.

While the emphasis is on slashing excess and carefully reining in discretionary spending, much of the burden of this containment falls on public sector workers—“keeping the size of Alberta’s public service flat.” The slow-and-steady strategies listed rely heavily on “managing public sector compensation” through the ongoing hiring restraint, salary freezes on management and non-union staff, and by negotiating “practical” agreements with public sector unions, including already-completed deals with nurses and health care union HSAA’s third consecutive contract with a zero percent wage increase for auxiliary health workers.

While it is by no means the austerity-lite budget that many feared, there is very little that is truly progressive in this budget. That said, there are undeniably positive initiatives that should be applauded.

The continued expansion of the $25 per day childcare program, with an additional 4,500 spaces across 100 centres promises a tangible economic return on investment and addresses a crucial equity issue.

While the NDP government has not met its campaign promise on eliminating school fees (which were reduced slightly in last year’s budget), it has substantially expanded the school nutrition program, which will now reach 30,000 students across the province.

A much-needed $8.1 million allocated for support services for survivors of sexual assault (previously announced) will aim to reduce waiting times for counselling services and promote co-ordination of resources.

The budget provides for 1,100 new FTE positions in home care, continuing care, and community care, but no announcement of new LTC beds to meet the government’s campaign pledge of "creating 2,000 public long-term care beds over fours years"—an urgent target given our aging population and the increasingly complex care needs of seniors.

Overall, it is difficult to identify the "winners" or "losers" with this budget. Most Albertans would appear to be no better or worse off than they were yesterday. Given the economic and political context in which we find ourselves, that, in itself, could be considered a win.

Photo credit: Premier of Alberta under a Creative Commons licence.