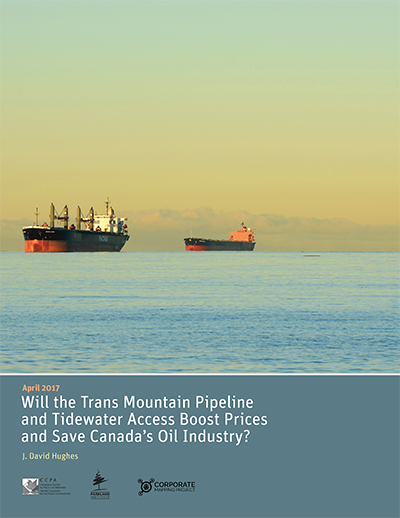 One of the primary rationales for Kinder Morgan’s Trans Mountain pipeline expansion project (TMEP), which will triple the capacity of the existing pipeline from Edmonton to Burnaby, BC, is to maximize the price for Alberta bitumen by getting oil from Alberta to “tidewater”. Tidewater refers to ocean access in order to ship oil to overseas markets via tankers. Industry and the federal and Alberta governments argue that a pipeline to tidewater will unlock new markets (Asia in the case of the TMEP) where Canadian oil can command a better price than in the US, where the majority of Canadian oil is currently exported.

This paper examines the tidewater argument and other problematic assumptions that led to the pipeline’s approval, including overly optimistic projections of future oil supply given the latest National Energy Board (NEB) projections and the Alberta government’s cap on oil sands emissions, and the failure to consider alternative export pipelines given the federal government’s and Trump Administration’s approval of the Line 3 Restoration Project and the Keystone XL pipelines.

In its oil supply assumptions submitted to the NEB, Kinder Morgan claimed the TMEP would result in higher prices for Alberta bitumen, conveying a $73 billion windfall over 20 years to Canadian oil producers. Kinder Morgan’s estimates were predicated in part on the assumption that a large differential will appear between the international price of oil (the “Brent” benchmark) and the North American price (the West Texas Intermediate [WTI] benchmark) over the first 20 years of the TMEP’s life. This differential was estimated at between US$5 to US$8 per barrel from 2018–2038.

Historically, however, the differential between international and North American oil prices has been near zero or negative, and averaged just US$0.82 per barrel in 2016. Between 2011 and 2014 there was a significant international price premium caused by a pipeline bottleneck to the US Gulf Coast that drove down the North American price. The construction of new pipeline capacity has eliminated this bottleneck and the price differential is now near historical levels.

The US Gulf Coast represents the largest concentration of refineries in the world optimally designed to process heavy oil. Canadian oil sold on the US Gulf Coast fetches the same price as comparable heavy crudes (such as Mexican Maya), which sell at a discount to WTI due to their heavy gravity and high sulphur content, which makes them more costly to refine. The difference between Canadian heavy crude (Western Canada Select [WCS]) priced at Hardisty, Alberta, and Maya priced at Houston on the US Gulf Coast is solely due to the cost of transport from Hardisty to Houston, not an unfair discount.

Kinder Morgan maintained that Canadian oil is being forced into the finite North American market, which also does not stand up to scrutiny. The US relies on imports for 46 per cent of its crude oil requirements, and production from major heavy oil suppliers in Mexico and Venezuela is falling. The US market has the capacity to absorb significantly more Canadian oil, and even in the unlikely event that US markets were to become saturated, Canadian oil that reaches the Gulf Coast can be exported to world markets.

In its submission to the NEB, Kinder Morgan exaggerated the need for new pipelines by overestimating future oil supply. The company’s assumptions about future oil production, submitted to the NEB in September 2015 are considerably higher than NEB projections published in October 2016.

Furthermore, neither Kinder Morgan’s nor NEB projections considered the supply constraints imposed by the Alberta government’s cap on oil sands emissions introduced with its Climate Leadership Plan in November 2015. Considering both the most-recent NEB projections and the Alberta emissions cap, Kinder Morgan overestimated oil supply by 2.1 million barrels per day in 2038. Existing export pipeline and rail capacity are sufficient to move future production under Alberta’s emissions cap, although rail would need to be used for incremental growth after 2019–2021.

Kinder Morgan’s assumption in its NEB submission that no other export pipelines would be built is now obsolete because the federal government has approved Enbridge’s Line 3 Restoration project (from Edmonton, Alberta, to Superior, Wisconsin), and TransCanada’s Keystone XL pipeline (from Hardisty, Alberta, to Steele City, Nebraska). TransCanada recently received approval for Keystone XL from the Trump administration and it now seems likely that both of these pipelines will be built. These two pipelines would provide a 13 per cent surplus of pipeline-only export capacity without the TMEP.

Increasing oil and gas production while at the same time trying to reduce carbon emissions are conflicting priorities. Expanding oil sands production by 53 per cent and emissions by 47 per cent above 2014 levels, as allowed under Alberta’s Climate Leadership Plan, will require the rest of the Canadian economy to reduce emissions by 47 per cent by 2030 to meet Canada’s Paris Agreement commitments. This will be virtually impossible in the time remaining barring an economic collapse.

Three new pipelines have been approved and a fourth (Energy East) is under review even though oil supply forecasts show that not all are needed. Of these, the TMEP is perhaps the worst choice because it must cross rugged, environmentally sensitive terrain, and would require greatly expanded tanker traffic into Vancouver’s Lower Mainland, southern BC’s most-populated area, and its ecologically vulnerable marine environment. The fact that the TMEP was approved by the NEB based on inflated oil supply and price assumptions, and without considering the other approved pipelines, should also have been a key consideration before federal approval was granted.

These conflicting priorities stem from the fact that Canada has no energy strategy beyond liquidating its remaining non-renewable resources as fast as possible to serve the economic interests of governments of the day. What we really need is a comprehensive energy strategy that addresses both the future energy security of Canadians and Canada’s commitments on climate change.