Alberta’s carbon levy on transportation and heating fuels came into effect on January 1, 2017. Before and since its implementation, the carbon levy—often referred to as the carbon tax—has been the source of much public discussion.

In order to find out more about Albertans’ opinions about taxation in general, and the carbon tax in particular, Parkland Institute commissioned a poll from McAllister Opinion Research. The poll was conducted in January, in the early weeks after the carbon tax went into effect.

Given that the carbon tax has been a hot-button issue in the province, we were curious how a person's political party affiliation and where they live might influence views about the tax, so the poll included questions about these demographics.

When asked how they would vote if a provincial election were held tomorrow, 27% of respondents indicated support for Wildrose, 20% for the Progressive Conservatives, and 16% for the governing NDP. Of the remainder, 13% would vote for another party, and 24% were undecided. So, most respondents were not decided NDP voters at the time of polling, and just under half of the respondents would vote for either the Progressive Conservatives or the Wildrose, both right-of-centre parties that are critical of the carbon tax (it should be noted that the poll was conducted prior to Jason Kenney winning the PC leadership race).

McAllister Opinion Research asked respondents, “On January 1, 2017 Alberta introduced a carbon tax that applies to the sale of fossil fuels (i.e. coal, oil and gas). In your opinion, is the Alberta carbon tax a good idea or a bad idea?” Table 1 provides the results for all respondents and also the results based on voting preference for respondents who are supporters of one of the three major political parties.

Table 1: Opinions on whether the Alberta carbon tax is a good or bad idea

On the surface, it isn’t too surprising that 59% of Albertans polled three weeks after a new tax came into effect have a negative opinion about that tax. While Alberta is still the lowest-taxed province by $8.7 billion less to the next-lowest-taxed jurisdiction, it isn’t as if most Albertans (or anyone else) are going around thinking, “Gee, I wish I paid more taxes.”

Table 2 similarly shows that the majority of Albertans across regions believe the carbon tax is a bad idea.

Table 2: Regional opinions on whether the carbon tax is a good or bad idea

Table 2 shows the carbon tax is most unpopular in southern and northern Alberta, and most popular in Edmonton. Again, these are unsurprising results.

If the McAllister Opinion Research poll stopped there, then we wouldn’t have learned much beyond what was also revealed in a Mainstreet Research poll commissioned by Postmedia in February. However, Parkland Institute asked McAllister to go further because we wanted to know if Albertans’ opinions of the carbon tax changed if the funds raised by the tax were tied to enhancing specific public services or other particular outcomes.

It turns out, Albertans’ opinions about the carbon tax change a lot when they are asked more specific questions related to the carbon tax. Specifically, McAllister asked, "To what extent would you favour or oppose the Alberta carbon tax if you knew the funds were used to ..." followed by a series of public policy options. Table 3 provides the decided-voter breakdown for the three major political parties and Table 4 provides the regional breakdown.

Table 3: Decided voters’ opinions, "To what extent would you favour or oppose the Alberta carbon tax if you knew the funds were used to ..." 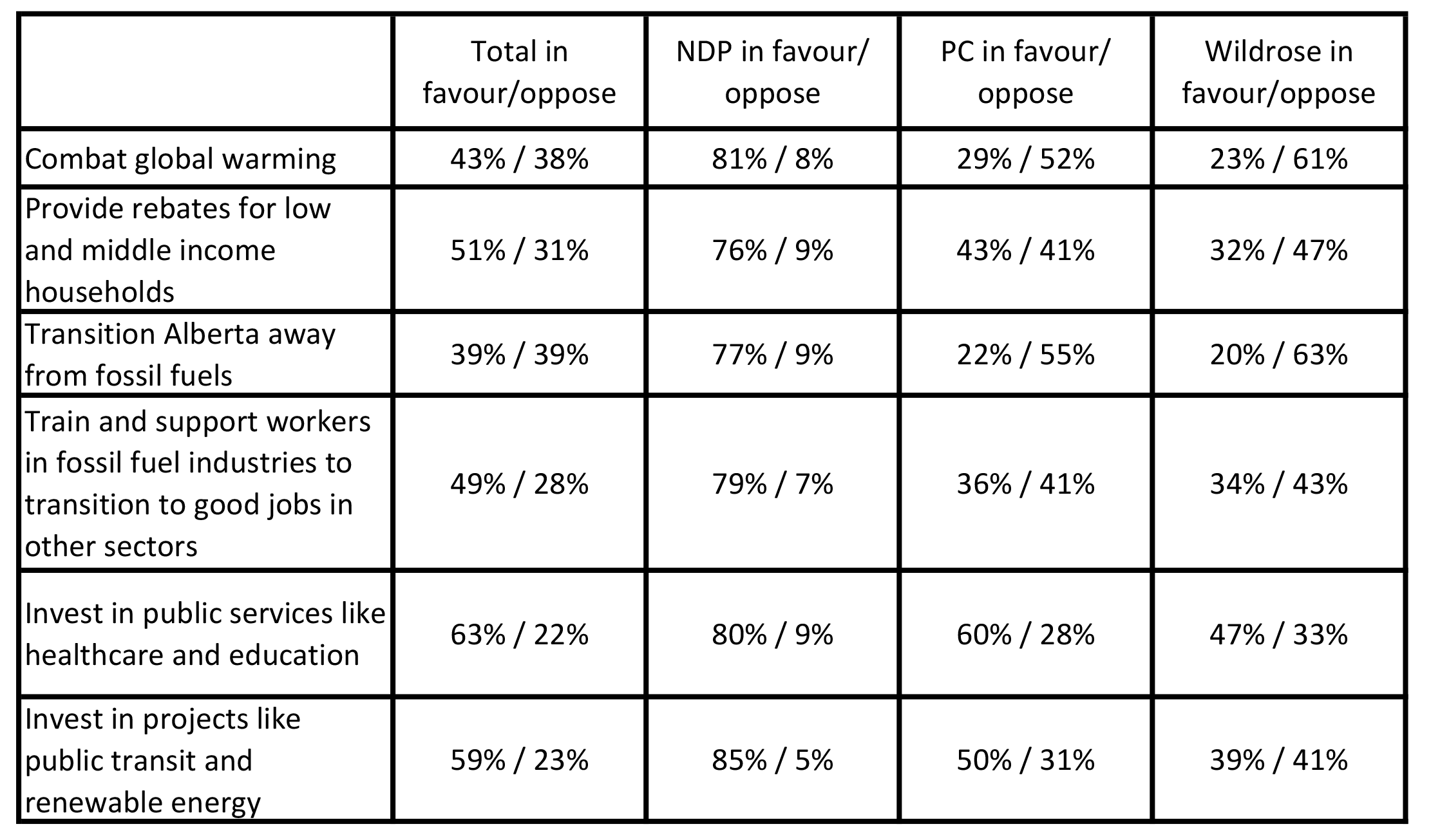 Table 3 shows that roughly four out of five of NDP supporters are in favour of the carbon tax when it is tied to specific public services (training workers, health care, education, public transit, and renewable energy).

NDP-decided voters are much more in favour (77%) of using the carbon tax to transition Alberta away from fossil fuels than PC (22%) and Wildrose (20%) voters. Roughly one-third of both PC and Wildrose voters favour the carbon tax when its funds are used to train and support workers in fossil fuel industries to transition to good jobs in other sectors, whereas just under 80% of NDP voters are in favour of carbon tax funds being used for this purpose.

PC voters are evenly divided between support and opposition for the carbon tax when rebates are provided to low- and middle-income households, and Wildrose voters are less supportive of this move than PC voters. The PC numbers should be encouraging for the government because about 60% of Alberta households will receive rebate cheques that cover the increase to their monthly costs.

Interestingly, both PC (60% in favour, 28% opposed) and Wildrose (47% in favour, 33% opposed) supporters would be in favour of the carbon tax if they knew funds were used to invest in health care and education.

It is also positive news for the government that 50% of PC-decided voters and 39% of Wildrose-decided voters are in favour of the carbon tax if some of the funds are invested in public transit and renewable energy because about 65% of the carbon tax revenues will be used for renewable energy, green infrastructure (such as improved public transit), and Energy Efficiency Alberta over the next five years.

Let’s turn to the regional opinions on the same question. Table 4 illustrates that in all four regions of the province health care, education, public transit, and renewable energy are the most popular public services to tie to the carbon levy.

Table 4: Regional opinions, "To what extent would you favour or oppose the Alberta carbon tax if you knew the funds were used to ..." 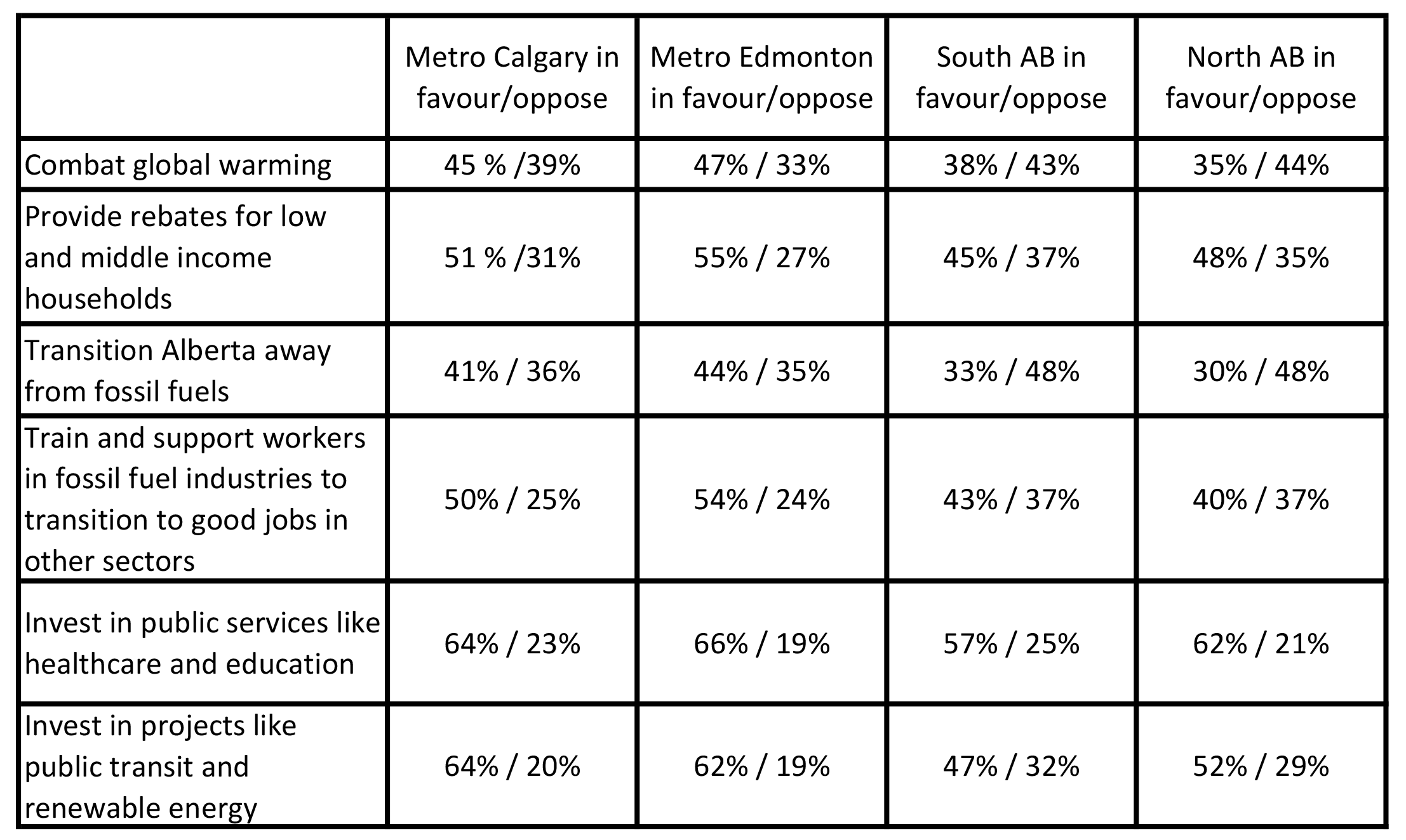 More respondents than not in Calgary and Edmonton are in favour of the carbon tax revenues helping to fund Alberta’s transition away from fossil fuels. There is more opposition in southern and northern Alberta for this policy option, with nearly half of respondents opposed and only a third in each region supportive of this approach.

More respondents than not in all four regions are in favour of using carbon tax revenue to train and support workers in fossil fuel industries to transition to good jobs in other sectors. Half of the Calgary respondents and 54% of Edmonton respondents support this action, while the respondents in southern and northern communities are more evenly split between support and opposition on this issue.

More respondents than not in all four regions are also in favour of using some carbon tax funds for rebates for low- and middle-income households, and to invest in public transit and renewable energy. These are important results because the government will be investing billions of carbon tax funds in rebates, renewable energy, and public transit in the next five years.

The fact that 52% of northern respondents are in favour of investing carbon tax funds in renewable energy is especially striking given this region is home to the oil sands industry.

There are three general conclusions to draw from this opinion poll.

First, the poll results indicate asking more specific questions about the carbon tax yields substantially different opinions from Albertans than simply asking a general question about whether people think the tax is good or bad.

Second, breaking down the poll results by decided voters of the three major parties or by region reveals some surprising and positive results. Albertans across party lines and regions are more in favour of the carbon tax when asked about tying the funds to enhancing public services or investing in initiatives such as public transit and renewable energy.

Third, opposition to the carbon tax has been blown out of proportion by the media and opposition parties. The poll results are striking and positive for those who support the carbon tax and the public programs its revenues will enhance.

Photo credit: Premier of Alberta under a Creative Commons licence.