The good, the bad, and the ugly of Alberta's new royalty framework

Alberta’s new royalty framework, released January 29 by the government, was one of the most anti-climactic pieces of new public policy released by the NDP government since coming to power last spring. Despite significant anticipation after a number of delays – and an extensive campaign of fear and doom-saying by the province’s oil industry and the extreme political right – five months of study and a 209-page report by the review panel ultimately led the government to assess that the existing regime was working well and that Albertans were getting their fair share of energy revenues after all.

The anti-climactic nature of the announcement, however, should not be taken to mean that the new royalty framework is without significance or that it will be without impact going forward. Here is a brief overview of the good, the bad, and the ugly of Alberta’s new royalty framework.

One of the most positive elements of the royalty framework announced by Premier Notley is the focus on transparency and reporting. For decades Albertans have been unable to obtain clear and detailed information about how much the province is actually collecting in royalties versus how much it should be collecting, what kinds of costs the industry is writing off, and what kinds of production levels and profit margins they are actually generating.

In 2007 Alberta’s then-Auditor General Fred Dunn reported that the principles of transparency and accountability had not been followed, and that Albertans had often had to file freedom of information requests in order to get a sense of whether royalties were being collected and if those royalties were fair and competitive. He added that the government had failed to collect over $1 billion a year in royalties that it was owed by the industry.

In the Auditor General’s 2011 follow-up report, Merwan Saher noted that the 2007 recommendations vis-à-vis performance measures for royalties in the oil sands sector had still not been implemented, resulting in Albertans not having a clear picture of targets and success in revenue capture in the sector.

The new royalty framework provides for clear and detailed annual reporting by Alberta Energy on a broad range of things including royalties collected, calculation of allowable costs, production levels, profit margins, net and gross revenue, and numerous others. Having access to this type of information on an annual basis will finally allow Albertans to determine for themselves how royalties compare to other jurisdictions, and whether or not the government is actually collecting a fair share of revenues. This will make it far easier for both citizens and the industry to hold the government accountable, while at the same time making it harder for the government to seek to quiet public discontent about royalties by using phrases like “royalties are complicated” or “trust us."

In the same vein, moving to a standardized revenue-minus-cost calculation of royalties that is the same across conventional oil, gas, and gas liquids will ensure consistency across the spectrum of natural resources and guarantee equal treatment for all aspects of the industry. Particularly positive in this regard is the move to a standardized calculation of allowable costs based on industry averages, which will not only help to encourage innovation and efficiency but will also provide Albertans assurance that it is the government determining allowable costs rather than the industry itself.

The decision by the government to leave the existing oil sands royalty regime untouched is problematic in terms not only of revenue generation from oil sands projects going forward, but also in terms of the province’s carbon footprint. The current regime, which charges new oil sands projects a significantly reduced royalty rate until they have paid off their capital costs was implemented at a time when development of the oil sands was unproven and uncertain. The idea was that providing the lower royalty up front would greatly reduce the risk of investment in the resource and kick start the development of the resource. It worked, and investment in bitumen extraction boomed during the late '90s and the 2000s.

Now that bitumen is a proven resource, and the technology is better understood and less risky, there is no longer a need for this kind of incentive. Quite the opposite. An incentive of this nature will distort the market and actually result in more and faster investment growth than may be desirable both in terms of the boom/bust effects on the economy and Alberta’s overall carbon footprint. We know that at the right price point the oil sands can be incredibly profitable, and that profitability should be enough on its own to encourage investment. If the oil sands cannot stand on their own as a profitable venture, then the government’s response should not be to prop them up through incentives, but rather to take it as an opportunity to diversify the provincial economy and make it greener and more sustainable.

Given the current low-price environment, it makes sense for the government not to touch the low end of royalties. Increasing them would serve no purpose other than to anger the industry, as low prices mean that virtually no one would be paying higher royalties at this point in time anyway. The decision not to increase royalties at the high end of the price scale, however, is seriously problematic. 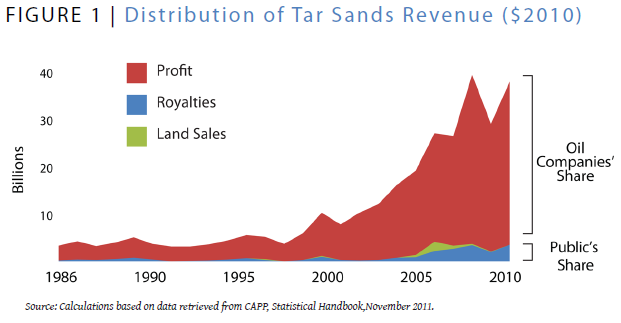 The figure above, from Parkland Institute’s report Misplaced Generosity: Extraordinary profits in Alberta’s oil and gas industry (Update 2012), highlights how the existing royalty rates impact the distribution of revenues in a high price environment. While it’s understandable that the government would come to the conclusion that what we are receiving today is fair given the collapse of prices, it is unfathomable that they would determine that maintaining the existing rates will provide us anything even remotely resembling a fair share once prices recover.

It is a fundamental principle of royalties that the bulk of economic rent resulting from high prices should go to the resource owners, not the industry. The reason for that is the high prices and increased rent are directly a result of the value of the resource itself, not anything the companies extracting it have done. If your house increases in value and you sell it, most of the increased value goes to you as the house’s owner, not your realtor. The same should be true for our natural resources. The new framework does not accomplish that.

In the end, the new royalty framework accomplishes a number of advances that were long overdue, not least of which is increased transparency and accountability, but seriously misses the mark in terms of making sure that Albertans – the resource owners – obtain their fair share of energy resources once the price of oil starts rebounding.

Ricardo Acuña has been executive director of Parkland Institute since 2002. He has a degree in Political Science and History from the University of Alberta, and has almost 30 years of experience as a volunteer, staffer and consultant for various non-government and non-profit organizations around the province. He has spoken and written extensively on energy policy, democracy, privatization, and the Alberta economy, and is a regular media commentator on public policy issues.