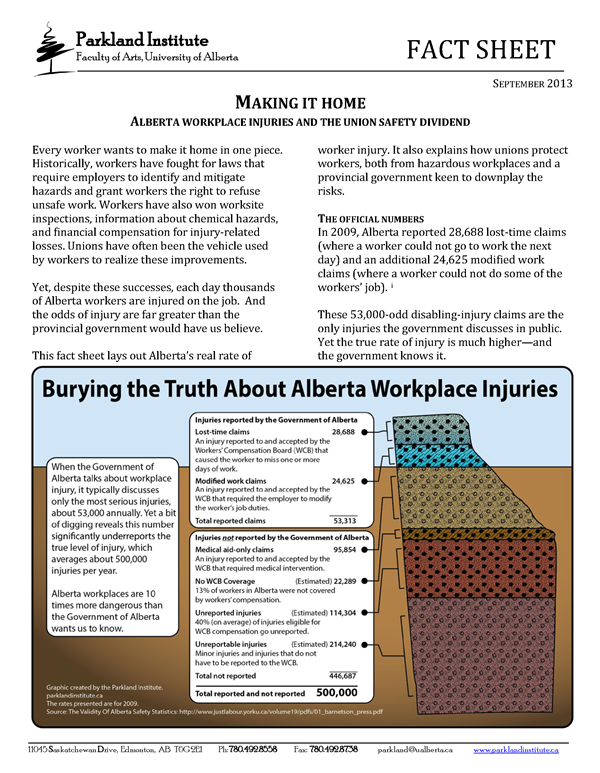 Every worker wants to make it home in one piece. Historically, workers have fought for laws that require employers to identify and mitigate hazards and grant workers the right to refuse unsafe work. Workers have also won worksite inspections, information about chemical hazards, and financial compensation for injury-related losses. Unions have often been the vehicle used by workers to realize these improvements.

Yet, despite these successes, each day thousands of Alberta workers are injured on the job. And the odds of injury are far greater than the provincial government would have us believe.

This fact sheet lays out Alberta’s real rate of worker injury. It also explains how unions protect workers, both from hazardous workplaces and a provincial government keen to downplay the risks.

These 53,000-odd disabling-injury claims are the only injuries the government discusses in public. Yet the true rate of injury is much higher—and the government knows it.

The government has data on an additional 95,854 claims that required medical intervention but did not result in lost-time or modified work. This brings Alberta’s 2009 injury total to 149,167 — nearly three times the number of injuries the government officially talks about.

We must then correct for the 13% of workers whose injuries went uncounted because they were not covered by workers’ compensation that year. This includes workers in some of Alberta’s safest jobs (e.g., accountants) and most dangerous jobs (e.g., agriculture). This brings the number of injuries to 171,456.

And we must correct for the estimated 40% of injuries that wrongly go unreported, bringing the number of workplace injuries to 285,760—five times the official injury count. This still excludes minor injuries (which do not have to be reported) as well as occupational diseases such as cancer (which are almost never reported) and psychological injuries (which are largely non-compensable). Discussion with practitioners suggests accounting for these injuries would push the actual number of injuries in Alberta to at least 500,000—roughly one for every four workers and 10 times the official number of injuries.

What this tells us is that Alberta workplaces are much more dangerous than the government acknowledges publicly. It also suggests that government injury-prevention efforts are woefully ineffective and even damaging to the basic purpose of occupational health and safety—preventing worker injury and death.

While these safety rights are important, they tend to be weak rights. Workers’ right to know about workplace hazards has been compromised by a long history of employers withholding information and systematically underestimating the risk associated with work processes and materials.ii Workers’ right to refuse unsafe work is compromised by workers’ reluctance to risk dismissal. So, despite holding these rights under law, workers remain significantly at risk.

Employers introduce the vast majority of workplace hazards when they design a job or organize work. While many employers are genuinely concerned for workers’ well-being, all employers have incentives and opportunities to profit from risks borne by workers, their families and communities.iii

There is significant evidence of widespread employer non-compliance with basic Occupational Health and Safety obligations. In 2011, for example, Alberta announced a safety-inspection blitz in the residential construction industry. Despite knowing government inspectors were coming, the majority of the 387 employers inspected had safety violations, including 90 cases where the violations posed an imminent danger of injury or death. These results were broadly consistent with the result of other safety blitzes conducted by the government.iv

In light of widespread employer noncompliance and ineffectual state enforcement, workers are largely left to fend for themselves with respect to workplace safety.

Unionization provides workers with a significant safety dividend. Insofar as workers’ well-being matters to their families and communities, this dividend benefits all Albertans.

Greater worker participation in Occupational Health and Safety efforts is associated with better outcomes (including fewer injuries), in both non-unionvii and unionized settings.viii Worker participation tends to be more effective in larger workplaces and in the presence of trade unionsix and less effective in smaller firms and in workplaces reliant upon various subcontracting and outsourcing arrangements.x

In most jurisdictions, the right to participate in health and safety decision-making is realized through joint health and safety committees (JHSCs). JHSCs provide a venue for raising issues and discussing potential solutions, and they are usually associated with reductions in workplace injury rates.xi

Alberta is the only Canadian jurisdiction where JHSCs are not mandatory for any size of workplace.

In Alberta, unionized workers are much more likely to have access to a JHSC than non-unionized workers because JHSCs are often required by a collective agreement. In Alberta, unions have also supported workplace safety education through the Alberta Workers’ Health Centre (AWHC) and by providing interested members with training about workplace hazards and how to address occupational health and safety issues in the workplace.

Unionization also increases the odds that workers will feel that they can refuse unsafe work without risking reprisals such as job loss. A Quebec study found non-union workers accounted for only 2.9% of work refusals even though they comprise 72.2% of the workforce.xii

Unions also seek to change legislation and policy around workplace safety by lobbying politicians and participating in stakeholder consultations. Frequently, union representatives are the only ones representing the interests of workers in policy consultations. In Alberta, such lobbying has included successfully advocating for stiffer penalties for safety violations, the creation of a targeted employer program for repeat offenders, and reductions in legal exposure limits for certain hazardous materials.xiii

Alberta unions have also pushed for greater statistical reporting of injuries.xiv In this way, they are seeking to protect workers from a provincial government interested in downplaying the risks workers endure everyday on the job. Exposing the high rates of worker injury that the Alberta government would prefer to keep buried helps build the awareness that enables workers to take care of themselves and each other, as well as their families and communities.

[vii] D. Walters, E. Wadsworth and K. Marsh, “Worker Representation and Consultation on Health and Safety: An Analysis of the Findings of the European Survey of Enterprises on New and Emerging Risks,” (Luxembourg: European Agency for Safety and Health at Work, 2012).

[ix] T. Nichols and D. Walters, “Worker Representation on Health and Safety in the UK — Problems with the Preferred Model and Beyond,” in International Perspectives on Representing Workers’ Interests in Health and Safety edited by D. Walters and T. Nichols, 19-30. Palgrave Macmillan, Basingstoke, 2009.
T. Nichols, D. Walters and A. Tasiran, “Trade Unions, Institutional Mediation and Industrial Safety — Evidence from the UK,” Journal of Industrial Relations 49(2) (2009): 211-225.
D. Walters and K. Frick, “Worker Participation and the Management of Occupational Health and Safety: Reinforcing or conflicting strategies?” in Systematic Occupational Health and Safety Management: Perspectives on an International Development, edited by K. Frick, P. Langaa Jensen, M. Quinlan and T. Wilthagen, 43-66.Oxford: Pergamon, 2000.