Alberta’s regressive labour laws have played an important role in making Alberta the least unionized province in Canada. While Alberta’s recently elected New Democratic Party government is likely to address a number of long-standing issues in Alberta labour laws – such as unconstitutional prohibitions on strikes, incorporating the Rand formula, shortening the period between certification applications and votes, and removing provisions limiting organizing in the construction industry – none of these changes are likely to address the alarming and ongoing decline in union density in the province. 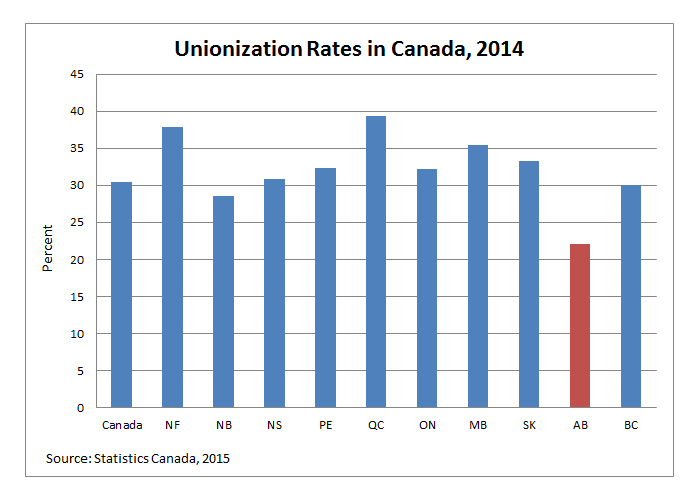 Union density in Alberta broadly mirrored these national patterns. In 2014, 22.1% of Alberta workers were unionized. The majority (60.8%) of unionized workers work in Alberta’s public sector and the unionization rate is higher in the public sector (68.8%) than in the private sector (10.8%).

Private-sector unionization is concentrated in the construction, manufacturing, trade, and transportation and warehousing industries. Of particular concern is that Alberta’s labour laws make it difficult for workers in the service sector (where women comprise approximately 60% of the workforce) to exercise their associational rights.

Alberta’s regressive labour laws – which reflect overt hostility towards organized labour by the Social Credit (1935–1971) and Progressive Conservative (1971–2015) governments – have contributed to Alberta’s low union density. For example, research demonstrates that requiring a vote to certify a new bargaining unit results in fewer organizing drives and a lower success rate.

One purpose of labour law is to ensure workers can exercise their associational rights. Alberta’s labour laws constrain Albertans’ ability to do so, and require change. There is a range of policy options available to the government that, individually or in concert, would enhance Albertans’ abilities in this regard.

Five possible reforms are outlined below: card-check certification, first-contract arbitration, remedial certification in cases of significant employer interference in union organizing, sectoral bargaining, and minority unionism. The first three changes are less controversial, and entail strengthening workers’ abilities to unionize under the current system of labour relations. More controversial are the notions of extending sectoral bargaining outside of Alberta’s construction industry, or allowing workers access to some form of minority unionism to remedy the issue of up to one-third of non-unionized workers being denied the opportunity to meaningful exercise their associational rights.

Canada’s current labour regime is based upon the US Wagner model. Under Wagnerism, a government-appointed Labour Relations Board is responsible for certifying a union as the official bargaining agent for a group of workers.

Legislation based on the Wagner model has provided workers in standard employment relationships (i.e., full-time, full-year employment with a single employer) and at large industrial worksites with reasonably good access to union representation. This approach has worked less well in the service sector (e.g., banking, retail, food service) or for workers who are employed precariously.

Under the card-check model, if the union shows the Labour Relations Board evidence that a certain percentage of workers are union members, the Board then automatically certifies the union. Up until 1977, all Canadian jurisdictions used card-check certification. Presently, only Quebec, Prince Edward Island, Manitoba, and Ontario’s construction sector do so, with the percentage required for automatic certification varying between 50% plus one and 65% of the workers in the proposed bargaining unit. Unions which cannot demonstrate support that meets the card-check threshold can still achieve certification through a certification vote.

The absence of any effect of these changes on public sector unionization (where employers are less likely to oppose unionization) suggests that requiring mandatory votes enabled employers who opposed unionization to thwart drives by giving the employer notice of the drive and time to act against it. Other studies have found similar card-check effects.

In short, returning Alberta to card-check certification will increase both the amount of organizing and the success rate of organizing drives.

Remedial certification is necessary because up to 80% of employers overtly and actively resist union certification efforts. This employer interference profoundly impacts workers’ ability to exercise their associational rights free from undue employer influence.

While Alberta’s Labour Relations Code currently allows the Labour Relations Board to remedially certify a union, it can only do so if that certification is confirmed by a vote of the affected employees. Since the purpose of employer interference is generally to pressure workers into voting against the union, conditioning remedy on a (likely poisoned) vote seems nonsensical.

The government of Alberta could also enhance workers’ ability to exercise their associational rights under the Wagner model by providing for first-contract arbitration (FCA). Essentially, if collective bargaining reaches an impasse when the union and employer are negotiating a first collective agreement, either side can apply for resolution via arbitration, rather than being forced into a strike and/or lockout.

The need for FCA reflects that some employers will stonewall the union during the first round of bargaining in the hope of breaking the union. The purpose of collective bargaining is to reach a mutually agreeable collective agreement, not to allow the employer an opportunity to re-fight the certification campaign. FCA addresses this inappropriate behaviour by eliminating an employer’s incentive to stonewall.

First-contract arbitration is available in most Canadian jurisdictions. Experience (particularly in BC, Ontario and Quebec) suggests the availability of FCA reduces employers’ incentive to stonewall unions to such a degree that FCA is rarely invoked.

The final change Alberta could make to enhance workers’ ability to exercise their associational rights under the Wagner model is to expand sectoral bargaining. Sectoral bargaining allows a union to negotiate a single collective agreement that covers multiple worksites and/or employers. When new worksites or employers are unionized, they become subject to the master agreement.

Internationally, there are many examples of sectoral bargaining in developed countries, including Argentina, Brazil, many European Union countries, South Africa, and South Korea. Most provinces (including Alberta) use sectoral unionization in the construction industry, where often employers are small and work is transitory.

Sectoral bargaining addresses the difficulties workers in small enterprises face in exercising their associational rights. In Canada, 98% of all employers are small enterprises (<100 employees), and small enterprises employ two-thirds of private-sector workers. Organizing and subsequently bargaining and administering a collective agreement in small workplaces is a relatively high-cost undertaking, for both the union and the employer.

Canadian sectoral bargaining typically only affects employers for whom a union has been certified. There are, however, other models. Some European jurisdictions allow for the extension of the agreement to other parties in some circumstances. In Quebec, collective agreements in the construction industry apply to all employers and workers. Quebec labour legislation also provides for decrees that extend provisions of collective agreements across an industrial sector, such as the automotive services sector in Montreal.

Sectoral bargaining also acts to remove wage costs from competition: all affected employers are subject to the same contact and, therefore, have the same basic labour costs. This forces employers to compete on productivity, efficiency and quality, rather than cheap labour.

To date, there has been no research about how sectoral bargaining affects unionization rates, most likely because there have been no “natural experiments” to observe. The logic of sectoral bargaining is, however, compelling. Allowing unions to negotiate multi-employer agreements reduces the costs associated with organizing small workplaces. The introduction of card-check certification provisions should reduce the risk of certification to workers in small workplace and increase the likelihood of successful drives. Together, these changes should increase the ability and willingness of workers in small enterprises to access union representation.

Under the Wagner system, unions are organized on the principle of exclusive majority unionism. In essence, only one union can represent a group (or class of workers) at a single employer’s worksite, and that union must be selected via a formal certification by a majority of those workers.

One effect of exclusive majority unionism is that there tends to be a gap between the demand for union representation and workers’ access to it. For example, some workers will want to be represented by a union but will be unable to convince a majority of their colleagues to support unionization. As we saw above, about a third of non-unionized Canadian workers fall into this category.

Some labour commentators suggest that the exclusive majority unionism adopted by provincial labour legislation may be unconstitutional because it denies some workers any way to meaningfully exercise their freedom of association, as required by s.2(d) of the Charter of Rights and Freedoms. Essentially, unless these workers can convince a majority of their co-workers to support a union, they have no vehicle by which to meaningfully associate.

Minority unionism extends bargaining and grievance-handling rights to unions representing less than a majority of workers in workplaces without an existing union. This approach allows workers to meaningfully exercise their associational rights even when they cannot achieve certification under the traditional Wagner model of certification.

Minority unionism also allows unions to organize workers at lower cost and risk. Worksites organized in this manner could then be converted to certified worksites in the future.

Minority unionism might legislatively build upon protections offered to US workers engaged in concerted activity by the National Labour Relations Act (NLRA). Section 7 of the NLRA provides protection to persons engaged in “concerted activity” for the purpose of “mutual aid or protection,” such as the recent “Fight for 15” campaigns by non-union workers across the United States.

These protections are broader than those usually accorded to workers in Canadian labour laws. For example, the protections set out in Sections 21, 148 and 149 of Alberta’s Labour Relations Code are focused mostly on the formation of or participation in a union. Other associational activity is not protected.

In his 2012 study, David Doorey suggests an approach he calls graduated freedom of association, wherein unorganized workers would have the statutory right to form associations and make representations to the employers about conditions of work. Employers would be obligated to engage in meaningful dialogue and in good faith as well as be precluded from reprisals against workers. The definition of worker might be broadened to “person” to open up minority unionism to non-employees (for example, independent contractors).

This blog is based on Bob Barnetson's presentation "Overcoming legal barriers to fair labour practice" at Parkland Institute's 2015 fall conference.