Bill 25, the Oil Sands Emissions Limit Act — commonly referred to as the emissions cap — is an additional plank in the government’s overall climate strategy, and received royal assent on December 14, 2016. The cap limits the greenhouse gas emissions "for all oil sands sites combined" to 100 megatonnes (Mt) in any year.

While there has been considerable debate about the merits of the Climate Leadership Plan, and especially the new carbon levy (or carbon tax, depending on where one stands in the debate), which took effect on January 1, 2017, there has been less public discussion about the emissions cap.

Yet, the cap has seemingly already had significant effects, with Prime Minister Justin Trudeau pointing to the Alberta emissions cap as part of his cabinet’s rationale for approving two new oil sands pipelines in late November 2016 (it should be noted that Trudeau’s pipeline approval announcement came before the emissions cap legislation received royal assent).

So, what are the details of Bill 25? And, will the cap enable Canada to meet its obligations under the Paris Agreement on climate change? With the Government of Alberta last week celebrating 70 years since Leduc #1 struck oil and started Alberta's first oil boom, here are five key facts about Alberta’s oil sands emissions cap.

1. The cap allows emissions from oil sands production to increase 47.5% above 2014 levels

Regarding the emissions cap and the hope that it will incentivize oil producing corporations to reduce the amount of GHGs emitted to produce a barrel, Environment Minister Shannon Phillips quipped, "Alberta got the oil out of the sand, we can now get the carbon out of the barrel." It's a clever turn of phrase, but the reality is the emissions cap is a supply-side policy that does not apply to demand-side emissions from the combustion of Alberta oil outside of the province’s borders.

On the supply side, the cap still allows emissions from the production of the oil sands to increase 47.5% above 2014 levels.

If Enbridge’s Line 3 and Kinder Morgan’s Trans Mountain Expansion Project pipelines are eventually built, then the emissions cap will have also enabled an increase in emissions from Alberta oil burned outside of the province’s borders.

2. There are exemptions to the emissions cap for co-generation and upgrading

The second exemption from the cap is for upgrading (emissions from the production of synthetic crude oil). Section 2b of Bill 25 states that "upgrading emissions (i) attributable to upgraders that complete their first year of commercial operation after December 31, 2015, or (ii) attributable to the increased capacity resulting from the expansion, after December 31, 2015, of upgraders that completed their first year of commercial operation on or before December 31, 2015, [will be excluded from the 100 Mt per year emissions cap] as determined in accordance with the regulations, to a combined maximum of 10 megatonnes in any year."

Regarding 2b(i), it is unlikely in the current oil price environment that new upgraders will be built in Alberta, but 2b(i) means if the price of oil increases to a point in the future where building new upgraders makes economic sense then those new facilities will be able to take advantage of the substantial 10 Mt exemption. Expanding existing refineries may also be unlikely in the current price environment, but 2b(ii) means that if the oil price increases in the future and Suncor, Canadian Natural Resources, Imperial, or another major oil sands producer increases the capacity of their pre-2016 refineries (e.g. Suncor Oil Sands, Syncrude, Edmonton, Horizon, or Strathcona refineries), then that new capacity will benefit from the 10 Mt exemption.

Nigel Bankes, Chair of Natural Resources Law at the University of Calgary, points out there may also be additional exemptions, writing, “In addition, section 2 [of Bill 25] creates a number of discretionary exceptions insofar as the Lieutenant Governor in Council may, by regulation, prescribe exclusion of emissions related to experimental schemes, primary production operations (which, while still to be defined, might refer to oil sands that can be produced using more conventional means of production) and enhanced recovery operations.”

3. We have to wait for the regulations to be developed to know how the emissions cap will work in practice

While Bill 25 received royal assent last December, the act does not obligate oil sands producers to do anything yet. The details of how the act will work in practice will be decided when the related regulations are developed in the coming months (the exact timeline for developing the regulations has not been set).

Bankes argues the new legislation may result in amendments to the Oil Sands Conservation Act that could include:

A significant limitation of Canada's and Alberta’s carbon accounting is that these calculations focus only on domestic carbon pollution. Alberta’s emission cap, for instance, focuses on the emissions generated through the production of the oil sands.

Neither the Alberta emissions cap nor the Pan-Canadian Framework on Clean Growth and Climate Change account for the emissions embedded in our growing exports of fossil fuels, chiefly Alberta oil.

The following chart from economist Marc Lee’s recent report on fossil fuel extraction in Canada and our country’s contribution to global climate change shows, “the growth in net exports of crude oil, the single-largest export category. With exports up and imports down, net exports [of crude oil] were 388 Mt CO2 in 2015, some 423 per cent higher than in 2000. In 2015, crude oil exports increased 9 per cent despite a substantial drop in oil prices” (page 13). 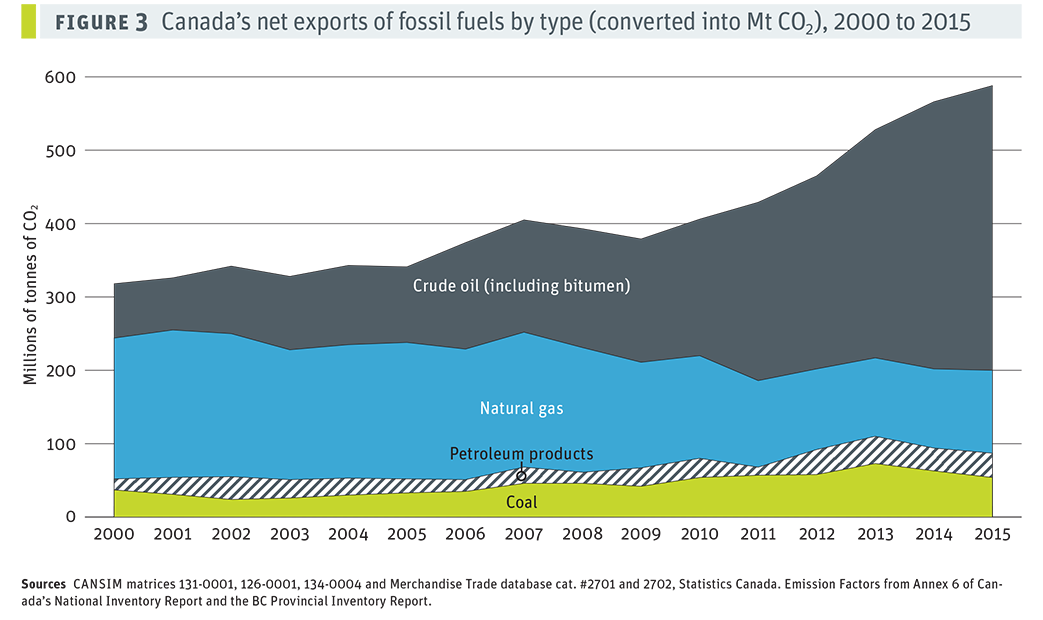 Since Alberta’s emissions cap only applies to (some of) the emissions attributable to the production of the oil sands, extractive corporations can continue to increase exports of fossil fuels in the coming years unabated by provincial or federal regulations or legislation. In fact, it seems both levels of government are hoping for this result given the recent approval of new export pipelines and liquid natural gas terminals.

Lee calls this the “green paradox” of the Paris climate agreement. Under the Paris Agreement, countries have committed to reducing GHG emissions within their borders, but the agreement doesn’t impose sanctions or limits on exporting fossil fuels to other countries. Therefore, oil exporters, such as Alberta and Canada more generally, have an incentive to export as much oil as possible in the near-future before more stringent global agreements are proposed as a result of worsening global warming.

5. Canada, and especially Alberta, is using far more of the global carbon budget than we’re entitled to

The Paris Agreement in effect sets a global carbon budget, “a ceiling on total greenhouse gas emissions that is consistent with keeping global temperature increase below a specified threshold.”

Often the threshold used for global carbon budgets is 2°C above pre-industrial levels (about 200 years ago), but scientists no longer consider the 2°C target to be enough to ensure a safe climate. The Paris Agreement aspires for a 1.5°C target, which scientists say will enable us to avoid the worst effects of runaway global warming.

In November 2015, just before leaving for the climate summit in Paris, Premier Rachel Notley said, “I’m going to be delivering the message that Alberta, and through Alberta, oil sands producers and all Albertans are prepared to do our part on reducing greenhouse gas emissions for the benefit of everybody.”

However, the government of Alberta has not lived up to this promise.

The following chart from Lee’s recent report on Canada’s fossil fuel exports shows Canada’s share of a global carbon budget, based on: 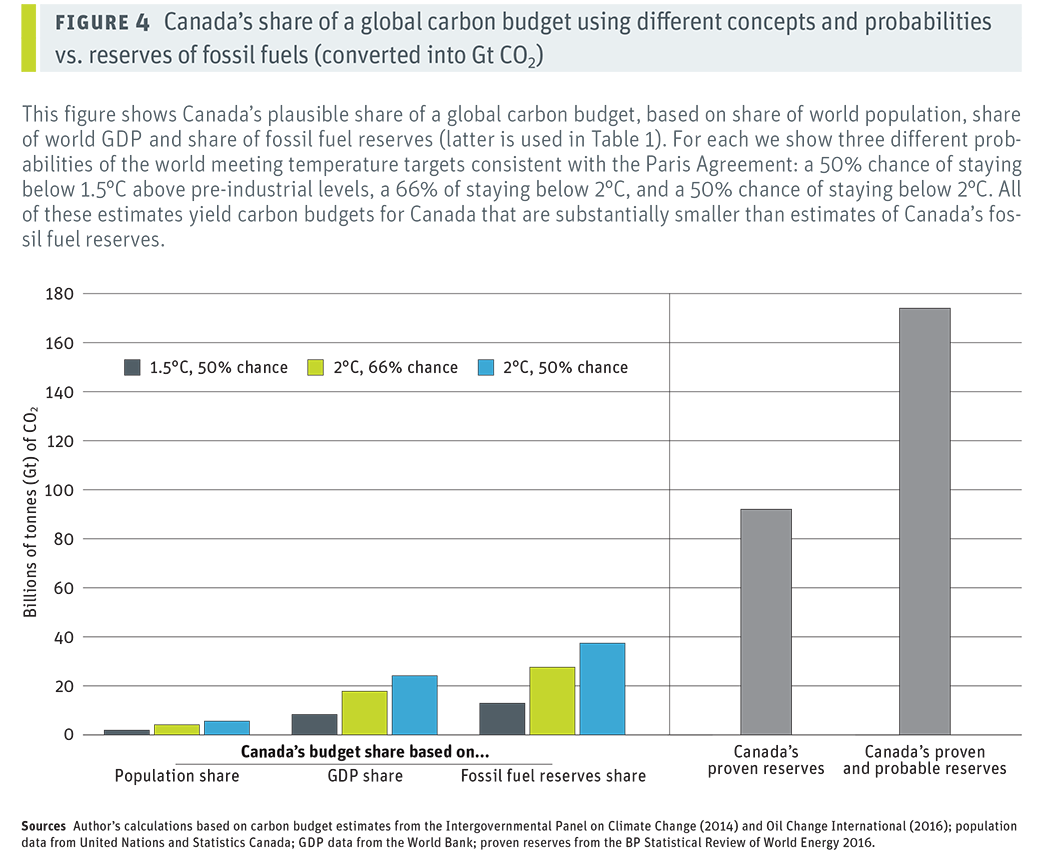 The chart illustrates that by each of these three measurements Canada’s share of the global carbon budget implicitly established by the Paris Agreement is much smaller than our proven and probable fossil fuel reserves. This means if Canada is truly to be a leader in climate change mitigation, then the majority of our fossil fuel reserves must remain in the ground.

The same goes for the reserves of other fossil fuel producing countries. A 2016 report from Oil Change International concluded that between 68% and 85% of global reserves must be classified as unburnable if the Paris climate goals are to be met.

This reality forces a controversial and unpopular conversation upon us: Canada and other fossil fuel producers need to develop plans for a managed decline of fossil fuel production over the course of the next three decades.