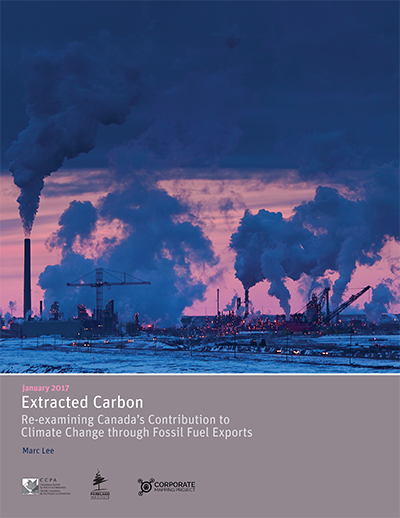 Canada helped usher in the Paris Agreement on climate change, but wants to continue reaping the economic benefits of being a fossil fuel exporter.

A major shortcoming of the Paris Agreement is that countries have committed to reducing emissions within their boundaries, but not the carbon that is extracted at home and burned elsewhere. So if Canada expands fossil fuel exports, only the emissions from extraction and processing prior to export are counted in our greenhouse gas (GHG) inventory, not the much larger emissions when the fuel is combusted in the US or Asia.

This study re-examines Canada’s contribution to global climate change in light of the Paris Agreement by looking at extracted carbon — the total amount of fossil fuels removed from Canadian soil that ends up in the atmosphere — whether used for domestic purposes, or exported and combusted elsewhere.

Living within a carbon budget

This limit on future global emissions is called a carbon budget. This report investigates Canada’s plausible share of a global carbon budget, and finds that in all cases it is much smaller than Canada’s proven reserves of fossil fuels.

Based on Canada’s share of global fossil fuel reserves, the resulting carbon budget implies that Canada could extract carbon at current levels for at most between 11 and 24 years (the smaller the carbon budget, the less the damages from climate change). This means a planned, gradual wind-down of these industries needs to begin immediately, rather than the continued pursuit of new fossil fuel infrastructure. Pipelines and new facilities for liquefied natural gas (LNG) will lock Canada in to a high-emissions trajectory for several decades to come.

Neither industry nor government appear to be considering the Paris Agreement in their future planning exercises. In spite of the Agreement, the National Energy Board continues to forecast increases in Canadian fossil fuel production and exports.

Ultimately, government efforts to address climate change must take into account supply-side measures to complement demand-side policies to reduce emissions. These include:

Canada’s exports of fossil fuels do not need to drop to zero immediately, but we cannot pursue policies that further increase extracted carbon. Currently, countries like Canada only have an incentive to get fossil fuels to market as quickly as possible before more stringent policies come into effect.

If all countries were to act like Canada and seek to continue expanding extraction and export of fossil fuels, we are collectively giving up on a limiting warming to 1.5 to 2°C. This is not the future envisioned in the Paris Agreement. 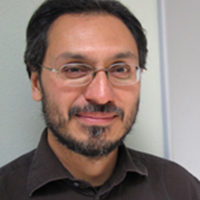 Marc Lee is a senior economist in the B.C. office of the Canadian Centre for Policy Alternatives (CCPA). From 2009 to 2015, Marc directed the CCPA’s Climate Justice Project, and he is part of the research team for the Corporate Mapping Project. Marc has authored and coauthored numerous publications on climate justice, inequality and public finance, and is a frequent media commentator on public policy issues.