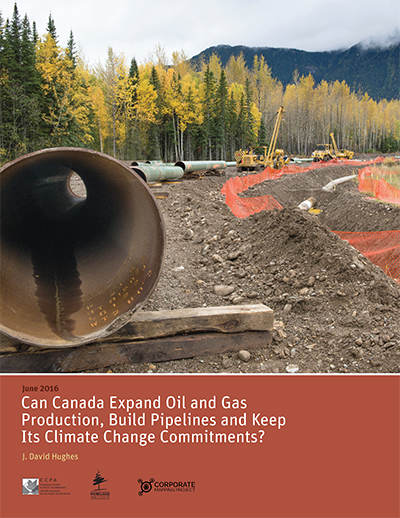 In December 2015, Canada joined 176 other countries to sign the Paris Agreement. By doing so, Canada has pledged to reduce its greenhouse gas emissions to 30 per cent below 2005 levels by 2030 (a minimum reduction that must be revisited according to the terms of the agreement). Environment Canada’s latest projections show that under existing energy and climate policies, emissions will be 55 per cent above the Paris Agreement target in 2030, which means that Canada has some serious work to do to fulfill its commitment.

Yet plans are afoot to expand the oil and gas sector, which constituted 26 per cent of emissions in 2014, by growing oil sands production in Alberta and establishing a liquefied natural gas (LNG) export industry in BC. The oil and gas industry is also pushing hard for new pipelines to export its growing production. Political leaders in Western Canada and the Prime Minister, meanwhile, assure citizens it is possible to meet our climate commitments while at the same time significantly expanding oil and gas production and infrastructure.

This study assesses the consequences of several scenarios of such expansion in the oil and gas sector in terms of the amount that the non–oil and gas sectors of the economy would need to reduce emissions to meet Canada’s commitments under the Paris Agreement. It also reviews existing pipeline and rail capacity for oil exports under the cap on oil sands emissions announced last year by the Alberta government (set at 100 million tonnes (Mt) per year).

Projected growth in oil and gas production under several scenarios means that non–oil and gas sectors of the economy would need to reduce their emissions by between 47 and 59 per cent below 2014 levels by 2030 to meet the Paris Agreement commitment. This level of reduction is near-impossible without severe economic consequences.

Canada’s Energy Future 2016, published by the National Energy Board (NEB) earlier this year, outlines several possible scenarios for oil and gas production through 2040. The NEB’s “reference case” represents its view of the most likely scenario. It projects a substantial increase in oil and gas production, driven mainly by a near-doubling of oil sands bitumen production.

It would be very difficult to reduce emissions outside the oil and gas sector by between 47 and 59 per cent below 2014 levels by 2030. Short of an economic collapse, it is difficult to see how Canada could realistically meet its Paris commitments without rethinking its plans for oil and gas development.

New pipelines are not needed under Alberta’s cap on oil sands emissions.

Although current pipeline and rail capacity is not sufficient to transport the near-doubling in bitumen production forecast in the NEB reference case, it is sufficient under the Alberta government’s announced cap on oil sands emissions at 100 Mt per year.

Under Alberta’s emissions cap, growth in oil sands production would be limited to 45 per cent over 2014 levels. Although there is insufficient pipeline capacity alone to move a 45 per cent ramp up in the oil sands, there is enough existing rail and pipeline capacity to handle it (including a 15 per cent surplus to allow for maintenance and outages).

The additional pipelines being lobbied for by industry and governments are therefore not necessary (see Figure A). 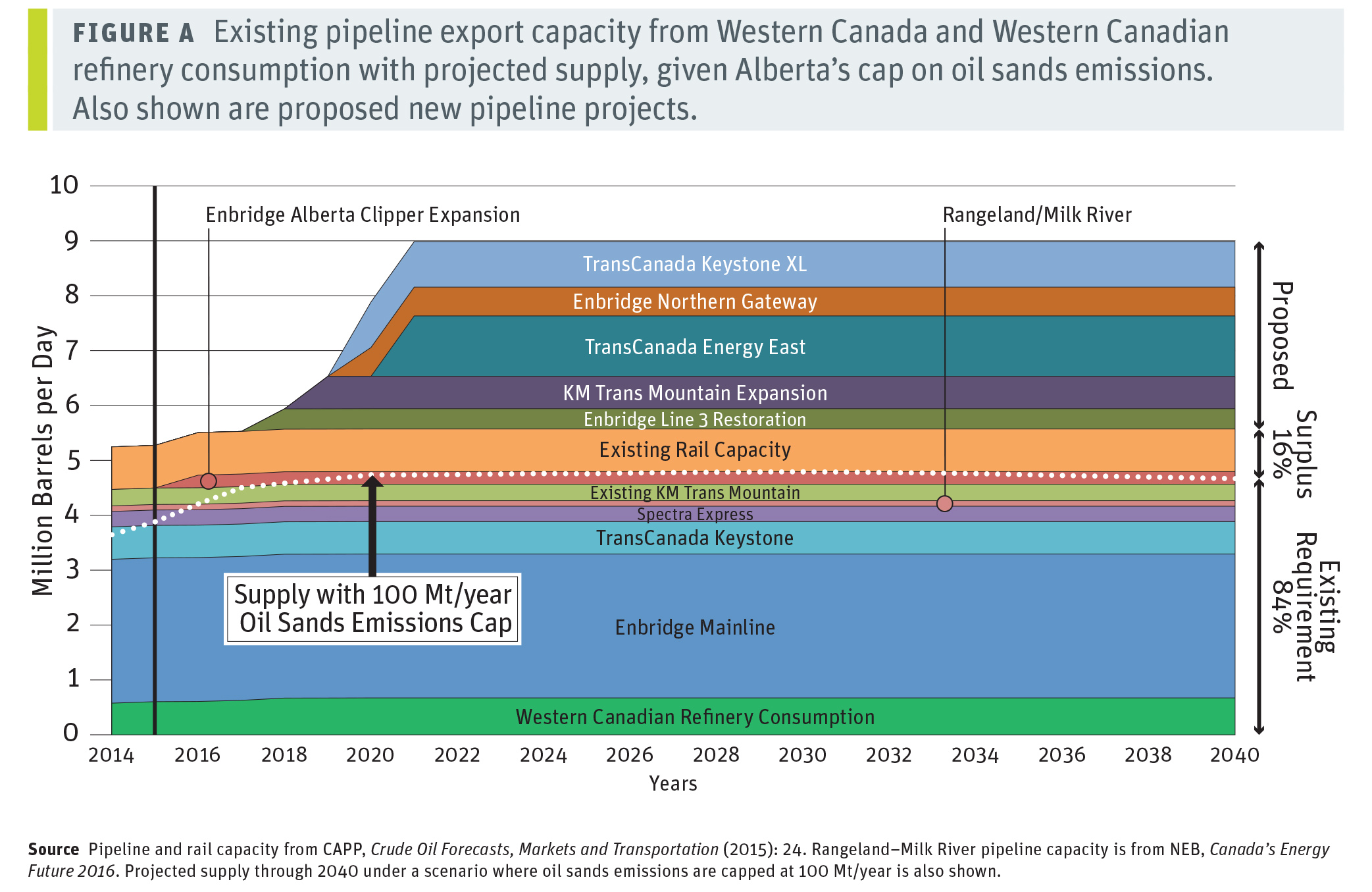 New pipelines with tidewater access will not significantly increase the price Canada receives for its oil.

Although oil is a globally priced commodity, between 2011 and 2014 the international price of oil (“Brent”) was significantly higher than the North American price (“West Texas Intermediate” or WTI), which caused the enthusiasm for “tidewater” access to allow overseas exports. This premium, which was primarily a result of the rapid increase of US tight oil production and a lack of pipeline capacity to move it to the Gulf Coast, has largely disappeared as a result of new pipelines coming online to relieve congestion, coupled with an end to the US ban on oil exports.

Canada’s primary oil export, “Western Canada Select,” is a lower quality grade of oil that requires more effort to refine and comes with higher transportation costs than the WTI benchmark, and therefore commands a lower price. This discount will occur regardless of whether the oil is sold in the US, or to international markets in Europe or Asia.

The assertion by politicians that tidewater access enabling overseas exports will somehow confer a significant price premium for Canadian oil is therefore not supported by the facts.

The widely recited rhetoric that Canada must continue its de facto energy strategy of liquidating its remaining non-renewable energy resources as fast as possible to maintain the economy is not credible on economic or environmental grounds.

The only prospect for significant growth in oil production in Canada is bitumen. But new bitumen projects require oil prices between $68 and $100 per barrel to be viable (price depends on the method of extraction and level of upgrading). Given the current state of global oil prices, significant expansion of oil sands production, beyond projects currently under construction, is unlikely regardless of what the NEB forecasts, or what industry and political leaders wish for.

Even if the price of oil wasn’t a barrier, the argument that Canada can build new pipelines to meet expanded oil production while also reaching its targets under the Paris Agreement is a “have your cake and eat it too” argument. Canada must rethink its dependence on the oil and gas sector.

Canada has never produced more oil, yet the economy is sluggish, caught in the downdraft of low oil prices which Canadian politicians can do absolutely nothing about. If Canada is to have any hope of meeting its Paris commitment, the aggressive oil and gas growth ambitions of the Alberta and BC governments will have to be reconsidered and reduced, as there simply isn’t the capacity in the rest of the economy to provide the emission reductions committed to by 2030.

Governments would serve the public much better — especially the workers and communities whose economic hopes currently hinge on a substantially expanded oil and gas sector — by planning for the shifts in energy development that are necessary to meet their climate change commitments. 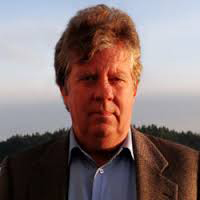