Women’s Equality a Long Way Off in Alberta

Alberta Most Unequal Province in Canada 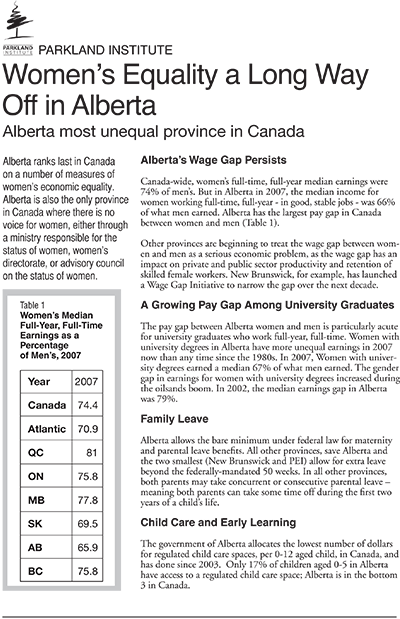 Alberta ranks last in Canada on a number of measures of women's economic equality. Alberta is also the only province in Canada where there is no voice for women, either through a ministry responsible for the status of women, women's directorate, or advisory council on the status of women.

Canada-wide, women's full-time, full-year median earnings were 74% of men's. But in Alberta in 2007, the median income for women working full-time, full-year - in good, stable jobs - was 66% of what men earned. Alberta has the largest pay gap in Canada between women and men.

Other provinces are beginning to treat the wage gap between women and men as a serious economic problem, as the wage gap has an impact on private and public sector productivity and retention of skilled female workers. New Brunswick, for example, has launched a Wage Gap Initiative to narrow the gap over the next decade.

Alberta allows the bare minimum under federal law for maternity and parental leave benefits. All other provinces, save Alberta and the two smallest (New Brunswick and PEI) allow for extra leave beyond the federally-mandated 50 weeks. In all other provinces, both parents may take concurrent or consecutive parental leave - meaning both parents can take some time off during the first two years of a child's life.

Alberta's total number of regulated child care spaces has not grown appreciably since 1992, though the population and the economy have both grown substantially. In 2007-08, the Government of Alberta spent slightly less than the province of Manitoba on child care, despite Alberta's much larger population, demand for workers, and size of the economy

Families headed by female lone parents who work are more likely to live in low-income in Alberta (24%) than in the rest of Canada (16%). Alberta's female lone parents also, on average, pay higher taxes than in BC and Ontario. Alberta also has the lowest social assistance rates in Canada for a single parent with children.

Alberta in a minority of provinces without a child benefit

Alberta is the only jurisdiction in Canada without a minister responsible for the status of women or an advisory council to government on the status of women. Of all the provinces and territories, Alberta is alone in having no mechanisms for gender analysis of social and economic policy, or even a council acting in an advisory capacity to government.