Women’s Equality a Long Way Off in Alberta

Gender Gap Remains Among the Widest in the Nation 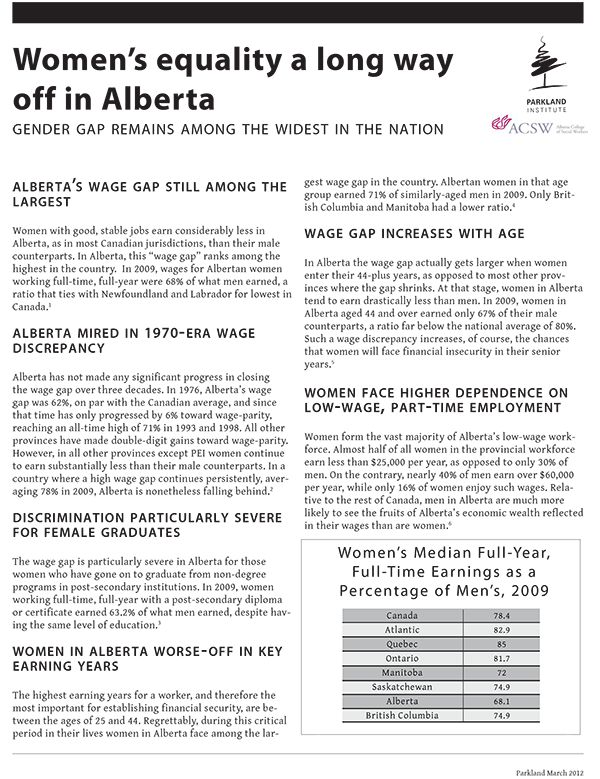 Women with good, stable jobs earn considerably less in Alberta, as in most Canadian jurisdictions, than their male counterparts. In Alberta, this “wage gap” ranks among the highest in the country. In 2009, wages for Albertan women working full-time, full-year were 68% of what men earned, a ratio that ties with Newfoundland and Labrador for lowest in Canada.1

Alberta has not made any significant progress in closing the wage gap over three decades. In 1976, Alberta’s wage gap was 62%, on par with the Canadian average, and since that time has only progressed by 6% toward wage-parity, reaching an all-time high of 71% in 1993 and 1998. All other provinces have made double-digit gains toward wage-parity. However, in all other provinces except PEI women continue to earn substantially less than their male counterparts. In a country where a high wage gap continues persistently, averaging 78% in 2009, Alberta is nonetheless falling behind.2

The wage gap is particularly severe in Alberta for those women who have gone on to graduate from non-degree programs in post-secondary institutions. In 2009, women working full-time, full-year with a post-secondary diploma or certificate earned 63.2% of what men earned, despite having the same level of education.3

The highest earning years for a worker, and therefore the most important for establishing financial security, are between the ages of 25 and 44. Regrettably, during this critical period in their lives women in Alberta face among the largest wage gap in the country. Albertan women in that age group earned 71% of similarly-aged men in 2009. Only British Columbia and Manitoba had a lower ratio.4

In Alberta the wage gap actually gets larger when women enter their 44-plus years, as opposed to most other provinces where the gap shrinks. At that stage, women in Alberta tend to earn drastically less than men. In 2009, women in Alberta aged 44 and over earned only 67% of their male counterparts, a ratio far below the national average of 80%. Such a wage discrepancy increases, of course, the chances that women will face financial insecurity in their senior years.5

Women form the vast majority of Alberta’s low-wage workforce. Almost half of all women in the provincial workforce earn less than $25,000 per year, as opposed to only 30% of men. On the contrary, nearly 40% of men earn over $60,000 per year, while only 16% of women enjoy such wages. Relative to the rest of Canada, men in Alberta are much more likely to see the fruits of Alberta’s economic wealth reflected in their wages than are women.6

In 2011, women made up 70% of the part-time workers in Alberta – a ratio that has stayed relatively constant since the statistic began being recorded in 1976. It is particularly high during the critical earning age group of 25-44, when women were 79% of Alberta’s part-time workers and only 39% of the full-time workforce. Overall, women in Alberta made up only 40% of the full-time workforce in 2011 – a ratio that has only

marginally increased since 1976. Essentially, women are far more likely to be stuck in a part-time job than their male counterparts, who maintain a strong-hold on Alberta’s fulltime employment.7

While men benefited more than women from the economic boom in Alberta, both sexes suffered during the subsequent bust. Men in their working years received significant income gains from the recent boom, with median incomes increasing 32% between 2005 and 2008. Women in the workforce of the same age, during the same period, received an income boost of 18%, about half that enjoyed by men. However, despite the relative income gains enjoyed by the men, women and men suffered roughly the same relative hit to their median income. In 2009, the median income for both male and female working-age earners fell between 7 and 8%. More recently, in the supposed economic upswing of 2010, the unemployment rate decreased for men but increased for women.8

Alberta is the only jurisdiction in Canada without a minister or advisory council responsible for the status of women. Alberta is alone in having no mechanisms for gender analysis of social and economic policy, or even a council acting in an advisory capacity to government.

Alberta in a minority of provinces without a child benefit

Alberta is among a shrinking group of provinces that does not have a provincial child benefit for low-income families. Such a benefit had been identified as a critical means to reduce child poverty. Child benefits exist in British Columbia, Ontario, New Brunswick, Newfoundland and Labrador, Nova Scotia, NWT, Yukon, and Nunavut.9 Alberta’s Family Employment Tax Credit excludes those unable to find work and maintain a minimum level of wage-based income; other provinces have similar programs in addition to a provincial child benefit.