Ten things to know about a $15 minimum wage in Alberta

The pledge to raise the Alberta provincial minimum wage to $15 per hour by 2018 was an important plank in the Alberta New Democratic Party’s 2015 election platform, and within its first month in power the newly elected NDP government announced public consultations on its plan to raise the minimum wage.

Following the consultations, the government moved forward by increasing the general minimum wage from $10.20 to $11.20 per hour on October 1, 2015 and began to phase out the two-tier lower minimum wage for liquor servers, a move that will be completed this coming October 1st.

The government announced last month that it will again be consulting with business, labour, and public interest organizations about the second staged increase of the minimum wage. In the announcement, Alberta’s Minister of Labour Christina Gray stated, “We’re committed to bringing Alberta’s general minimum wage up to $15 per hour to give lower-income Albertans the ability to support their families. We want to take the time to listen to the people directly involved and make sure we get this right.”

Parkland Institute will be participating in this year’s consultation, and here is a list of 10 key facts about the minimum wage I made in preparation for the June 8 consultations in Edmonton. 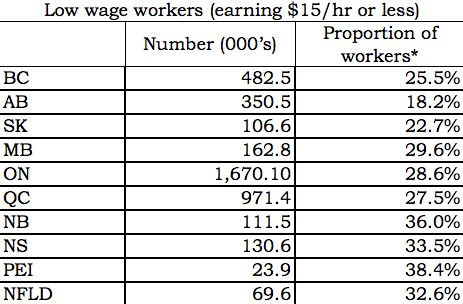 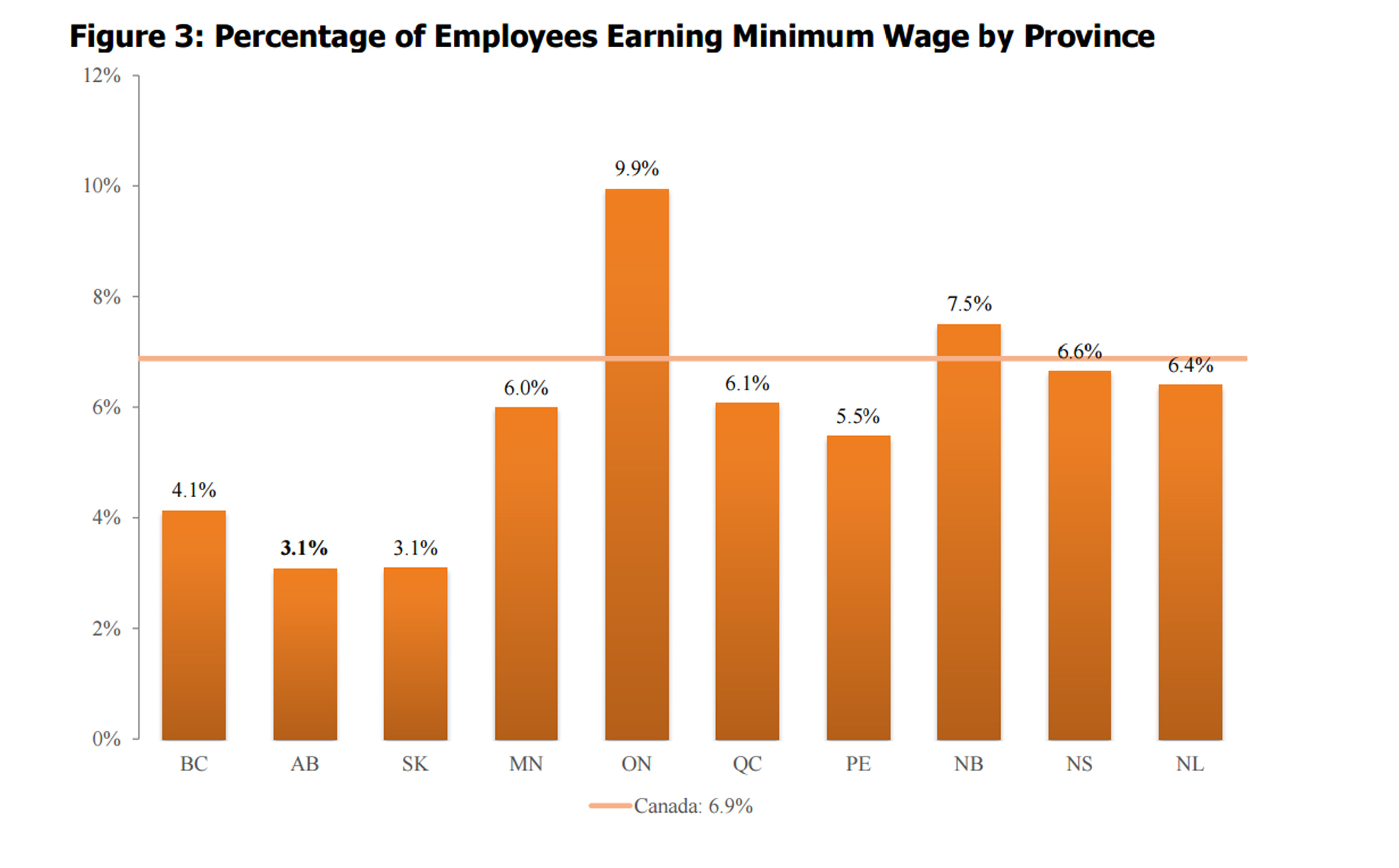 Any proposal to increase the minimum wage by any amount in any province or territory seems to be met with dire warnings of massive job losses and impending economic doom. The problem for critics of the minimum wage is neither history nor academic research backs these notions up.

Last year, for example, the Canadian Federation of Independent Business (CFIB) made the bold prediction that the government of Alberta's $15 per hour pledge would cost the province "between 53,500 and 195,000 jobs." In other words, the CFIB believes that almost half of the 350,500 Alberta workers currently making less than $15 an hour could lose their jobs. This is simply not credible.

The CFIB’s prediction of massive job losses is based on a report it published in 2011 that misinterprets the economic research on minimum wage. A closer reading of that report reveals the bulk of the predicted job losses are for workers over age 25. However, the weight of the academic evidence finds no negative impact of minimum wage increases on the employment levels of this age group.

There are "meta-studies" (studies of studies) on minimum wage that come to this conclusion. In 2009, for example, Hristos Doucouliagos and T.D. Stanley published a meta-study of 64 minimum wage studies published between 1972 and 2007. These researchers took the almost 1,500 employment estimates in these studies, weighted the estimates by their statistical precision and, as you can see in their chart below, "found that the most precise estimates were heavily clustered at or near zero employment effects." In other words, the most precise estimates point toward minimum wage increases having no or near-zero effect on employment. 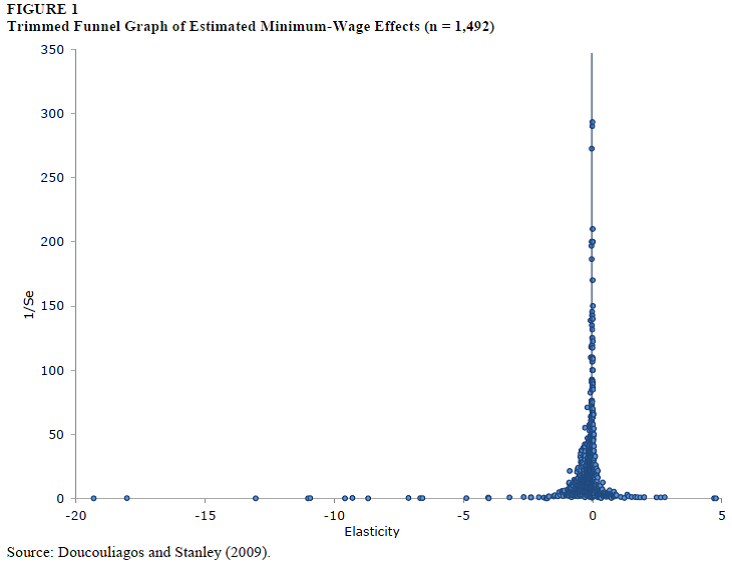 3. Recent minimum wage increases have not resulted in the massive job losses predicted by opponents

Alberta’s 9.8% hike to the minimum wage on October 1, 2015 was less of an increase than that implemented by the Alberta Tories in 2007 (14%), in Quebec in 2010 (12%), and in British Columbia in 2011–12 (28%). None of these cases resulted in significant job losses according to a briefing note prepared for the Alberta Minister of Labour by the provincial civil service, which was obtained by CFIB.

There is much to learn from the recent experience in neighbouring British Columbia. After almost a decade without an increase to the minimum wage, the BC government in 2011 announced it would raise the minimum wage from $8 to $10.25 over the course of a year – an increase of 28%. Shortly before the first planned increase, the Fraser Institute published a report warning the wage hike "could lead to over 52,000 job losses," equivalent to a 16% decline in employment for young workers under 25.

University of British Columbia economics professor David Green examined the impact of BC’s increase and concluded that the employment rate for workers under 25 declined by 1.6% between 2010 and 2013. That’s a mere one-tenth the impact predicted by the Fraser Institute.

In a report released last April, Green explains why the wild job losses predicted by business lobby groups and think-tanks fail to materialize. He identifies two common mistakes minimum wage opponents make when interpreting the economics research. The first is assuming that estimated employment effects for teenagers apply to young adults (those aged 20 to 24). In reality, estimated effects for young adults and adult workers are effectively zero. The second is relying on old research based on 1990s data, while newer studies using the same methodology and data up to 2012 find much smaller employment effects from minimum wage hikes.

4. Consumer spending power has more impact on employment than raising the minimum wage

Higher wages lead to stronger consumer spending – and, as economists Jordan Brennan and Jim Stanford put it, “consumption expenditure is the largest single component of GDP by expenditure, making up around half of all expenditure in the economy.” Increasing the minimum wage is therefore in effect a stimulus to the local economy because low-income earners spend most of their income and chiefly in their community. Raising the minimum wage increases overall consumer spending power and the amount of money circulating in our economy, and those are good things for Alberta's business community.

5. It's a myth that most minimum wage earners are teenagers living with their parents

According to the Government of Alberta's recently released Alberta Minimum Wage Profile April 2015 – March 2016, 67.3% of Alberta minimum wage earners are not teenagers, and 17.5% are 50 and older.

6. In fact, almost half of Alberta minimum wage earners are parents

Past minimum wage increases had no significant impacts on poverty rates because they were too small, keeping full-time minimum wage earnings below the poverty line. In contrast, a $15 minimum wage would significantly boost the income of low-wage workers as a group, reduce working poverty and make a dent in the large increase in income inequality Canada – and most significantly, Alberta – has seen since the 1980s.

Furthermore, 61% of Alberta's minimum wage earners are women, so raising the minimum wage to $15 per hour will contribute to much-needed efforts to address Alberta's gender gap, which is the highest of all provinces.

A 2014 Parkland Institute fact sheet found that all Albertans – rich and poor alike – get sick more than other Canadians because of the level of income inequality in the province. So the combination of raising our provincial minimum wage to $15 per hour and the government of Alberta’s move last summer to re-introduce a progressive income tax in the province is likely to result in better overall health outcomes for all Albertans, and perhaps lower public expenditure per capita on Alberta Health Services.

In addition, people with low income end up engaging more with various social services and assistance programs from the community at large. As Finance Minister Joe Ceci has said, “There is almost a kind of subsidy going to private businesses through the charitable sector to keep people whole.”

This is part of the reason why the Organization for Economic Cooperation and Development (OECD), hardly a bastion of progressive thinking, published a research report in 2015, In It Together: Why Less Inequality Benefits All. Another big reason the OECD is railing against high rates of inequality is because inequality has also be found to slow down economic growth.

9. Most Alberta workers making less than $15 an hour work for large corporations

As Parkland Institute pointed out in an infographic about the stereotypes of who will benefit from the government of Alberta’s $15 pledge, 51% of Albertans making less than $15 an hour in 2014 worked for large corporations with more than 100 employees, not local mom-and-pop stores.

McDonald’s is a well-known, profitable corporation that employs many workers for less than $15 per hour. In February 2016, interim leader of the Progressive Conservatives Ric McIver tweeted a photo of recently installed touch screen food-ordering machines in a McDonald’s restaurant, declaring, “4 less AB jobs due to #NDP minimum wage policy.” Then-CTV reporter Kim Taylor quickly tweeted at McIver, “actually I covered this launch for CTV. Mcd’s says they hired 10-15 MORE per store: greeters and table service.”

More recently, in the US, McDonald’s CEO Steve Easterbrook affirmed that improving workers' wages and benefits has been good for business, saying, “The improvements we made to our compensation and benefits package to employees in U.S.-company operated restaurants, along with expanding [the tuition assistance program] Archways to Opportunity … have resulted in lower crew turnover and higher customer satisfaction scores.”

10. Even $15 an hour is not a living wage in Calgary, Edmonton, or Grande Prairie

A community’s living wage is an important measure to keep in mind because, as Calgary City Councilor for Ward 11 Brian Pincott put it, “When the cost of living and wages are out of balance, people struggle to afford housing and other basic needs. With a job, working Calgarians should be able to afford basic costs of living as well as be able to save for education, recreation and life’s little bumps in the road.”

In June 2015, the Edmonton Social Planning Council released research that estimated Edmonton’s living wage to be $17.36 per hour.

Around the same time, Grande Prairie’s living wage was estimated to be $17.35 per hour for a couple with two children, while the 2015 living wage for a single parent with one child was calculated to be $17.22/hour.

This research from three Alberta communities suggests that the provincial government’s commitment to raise the minimum wage to $15 per hour by 2018 falls a bit short of ensuring all working Albertans earn a living wage. The NDP government has shown leadership and integrity by beginning to implement their election promise to increase the minimum wage, but Albertans need their government to commit to ensuring that all working Albertans earn a living wage so we can all more fully share in the prosperity of our province.