The Alberta government’s plan to increase the hourly minimum wage from $10.20 to $15 by 2018 has generated considerable public debate and some bold predictions. The Canadian Federation of Independent Businesses (CFIB), for example, claims that it would cost the province “between 53,500 and 195,000 jobs.” In other words, the CFIB believes that as many as half of the 379,500 Alberta workers currently making less than $15 an hour could lose their jobs. This is simply not credible.

It’s not just the CFIB. Any proposal to increase the minimum wage by any amount in any province or territory seems to be met with dire warnings of massive job losses and impending economic doom. The problem for critics of the minimum wage is, neither history nor academic research backs these notions up.

There is much to learn from the recent experience in neighbouring British Columbia. After almost a decade without an increase, the B.C. government in 2011 announced it would raise the minimum wage from $8 to $10.25 over the course of a year — a raise of 28 per cent. Shortly before the first planned increase, the Fraser Institute published a report warning the wage hike “could lead to over 52,000 job losses” equivalent to a 16-per-cent decline in employment for young workers under 25.

University of British Columbia economics professor David Green examined the impact of B.C.’s increase and concluded that the employment rate for workers under 25 declined by 1.6 per cent between 2010 and 2013. That’s a mere one-10th of the Fraser Institute prediction.

In a report released in April, Green explains why the kinds of wild job losses predicted by business lobby groups and think tanks fail to materialize. He identifies two common mistakes minimum wage opponents make when interpreting the economics research. The first is assuming that estimated employment effects for teenagers apply to young adults aged 20 to 24. In reality, estimated effects for young adults and adult workers are effectively zero. The second is relying on old research based on 1990s data, while newer studies using the same methodology and data up to 2012 find much smaller employment effects of the minimum wage. 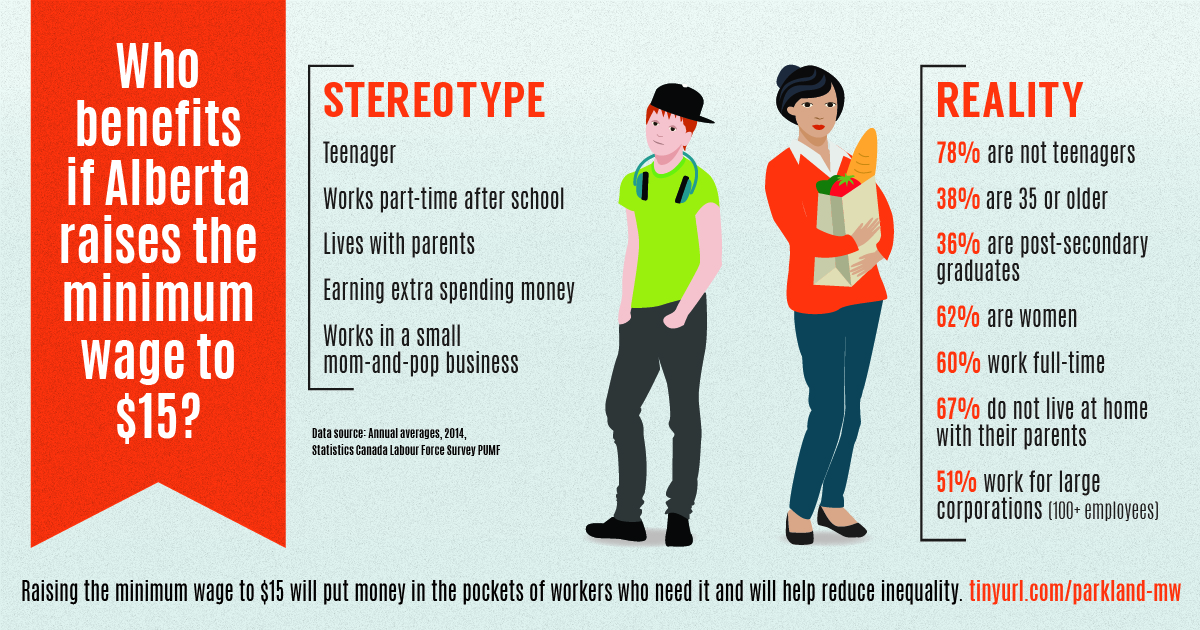 The recent CFIB prediction of massive job losses is based on a report it published in 2011 that similarly misinterpreted the economics research. A closer reading of that report reveals the bulk of the predicted job losses are for workers over age 25. However, the weight of the academic evidence finds no negative impact of minimum wage increases on the employment levels of this age group.

Further, a 2013 study by economists Pierre Brochu and David Green that uses more recent data than the research available in 2011 did, finds that even for teenagers and young adults, increases in the minimum wage have much smaller employment effects than those assumed by the CFIB.

Moving to a $15 minimum wage — even over the three-year period the Alberta government has proposed — represents a much higher increase than Canadians are used to, so it’s impossible to know exactly what the impact would be. However, the best estimates we have, those presented in Green’s recent paper, suggest a fraction of the employment costs the CFIB warns of.

Moreover, these costs must be weighed against the often overlooked benefits of a minimum-wage increase. Twenty per cent of Alberta’s workers — 379,500 people — earned less than $15 an hour last year. The vast majority (78 per cent) are not teenagers, and 38 per cent are 35 or older. Sixty per cent work full time and 54 per cent have been in the same job for longer than a year.

A $15 minimum wage would significantly boost the income of low-wage workers as a group, reduce working poverty and make a dent in the large increase in income inequality Canada has seen since the 1980s. The minimum wage is not a magic bullet, but it is an important element of a comprehensive strategy to reduce poverty and inequality. Plus, as Green has argued, higher minimum wages create incentives for employers to offer better, more stable jobs by making low-wage, high-turnover business models more expensive.

Business as usual is not working. Past minimum-wage increases had no significant impacts on poverty rates because they were too small, keeping full-time minimum wage earnings below the poverty line. It’s time for a bold increase, and it looks like Alberta’s new government is ready to show leadership.