Little houses on the prairie

One solution to the refugee housing crunch

Due to global circumstances, Canada and the province of Alberta will experience a large influx of immigrants and refugees in the coming months and years. With the province of Alberta expected to take in 2,500 to 3,000 Syrian refugees by the end of February (out of a total of 25,000 committed to by the federal government), several barriers to settlement and integration have been identified. The lack of affordable and appropriate housing has been identified as one of the primary barriers.

Given that Alberta is currently experiencing a growing affordable housing infrastructure gap with current rental stock already under pressure, the arrival of large numbers of immigrants and refugees will require smart planning and strategies to accommodate the increased demand. An immediate response and action must be taken by the provincial government to address Alberta’s lack of affordable housing stock and to prepare for increased immigration.

An immigrant and refugee housing and settlement program that increases Alberta’s overall supply of affordable rental housing while facilitating positive integration into Canadian society should be pursued. Actions by the province to address the influx of refugees must be supported by Alberta residents, should be done in partnership with existing settlement and sponsorship organizations, and benefit the province as a whole.

The current critical issues and barriers to resettlement are:

Housing is the number one priority for immigrant and refugee settlement. Current affordable housing options are limited and have generally called upon the public to offer housing accommodations.

These findings speak to the issue of lack of access to appropriate housing, and suggest that immigrants are more likely to suffer from housing affordability stress and associated impacts that may inhibit positive integration. Given that renting is the most viable option in terms of affordability for low-income earners, the provision of affordable rental housing has become a major concern in Alberta, with average rents increasing by 5.3% since 2014 and rental starts stagnating at around 10%. This has resulted in rental units becoming increasingly limited and expensive.

The Government of Alberta has recently committed to provide $1.2 million to support refugee resettlement. Unfortunately, this level of funding is inadequate to support the scale of resettlement services necessary for facilitating a smooth transition of new refugees into Canadian society. The chart below shows that the combined average rental rate for Edmonton, Calgary, Lethbridge, Red Deer, and Medicine Hat – the five Alberta cities that refugees are expected to be settled in – is $1,068 per month for a two-bedroom unit. In Calgary and Edmonton, the cities expected to accept the majority of refugees, rates are close to $1,285 per month. According to resettlement agencies, federal support for housing refugees is less than $700 per month for a family of four. Based on these rates, and expectations that between 2,000 and 2,100 refugees arriving in the province will require some government assistance, the level of funding currently provided will not be sufficient for providing newcomers with stable and secure housing. 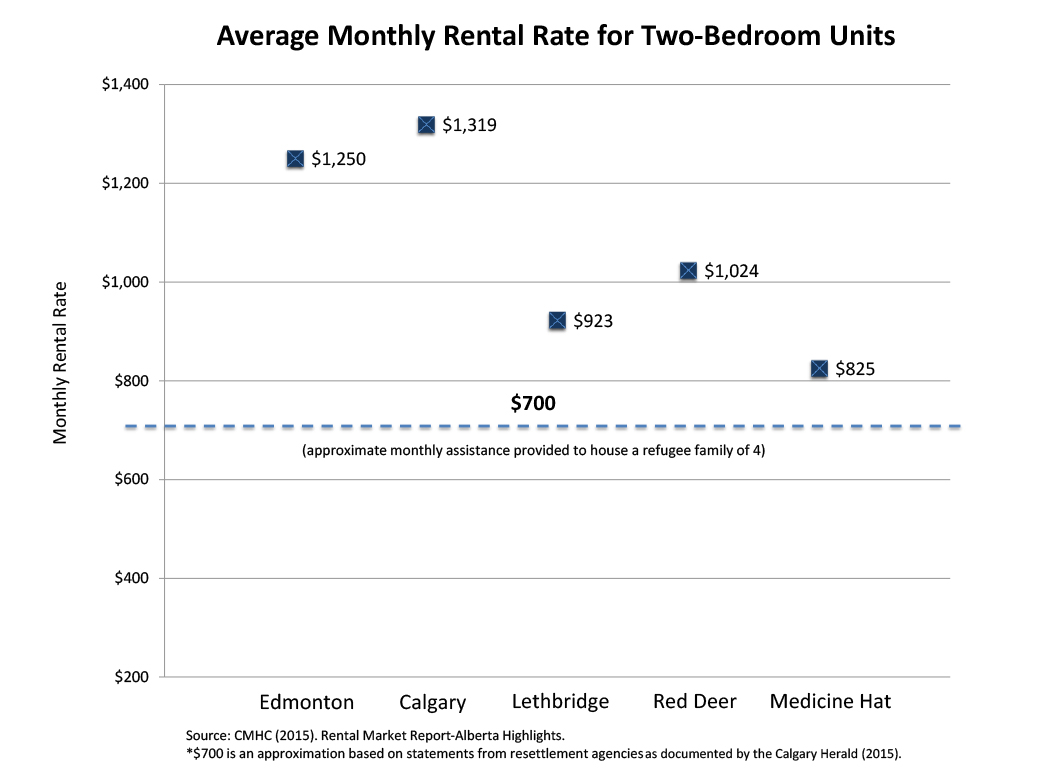 Research shows that lack of appropriate and affordable housing options and policies may result in the clustering of immigrants and refugees into neighbourhoods and housing situations that limit positive integration (Walks & Bourne, 2006). Clustering of refugees in vertical rental units in lower-income neighbourhoods is a likely outcome based on the current availability and affordability of rental units in the cities expected to accept refugees. Research also indicates that key issues for delivering appropriate housing that meets the needs of immigrants and refugees while aligning with the goals of the province include:

These factors align with the conclusions reached at the 2014 Alberta Integration Summit for establishing current priorities for settlement and integration in Alberta, and are supported by the Alberta Association of Immigrant Serving Agencies and Citizenship and Immigration Canada.

Detached accessory dwelling units are small, independent units placed on existing residential lots, usually in backyards, as a form of infill development. Commonly referred to as garden suites, these units can be built, delivered, and installed in as little as 30 days, and offer a form of affordable rental housing that is well-suited to immigrant needs. Costs of units range from $40,000 to $80,000.

As of April 2015, the City of Edmonton became one of several major Canadian municipalities, alongside Toronto, Ottawa, Montreal, Vancouver, and Red Deer, to adopt less restrictive zoning policies conducive to increased development of this form of infill housing. Of the five cities committed to settling refugees in the province, Edmonton and Red Deer are both relatively progressive in their allowance of accessory dwelling units, followed by Lethbridge and Medicine Hat. Calgary is the least progressive in allowing for accessory dwelling units and has not been able to move the issue forward for several years, with development of units limited to certain areas of the city and under discretionary use. Emerging research and projections indicate that accessory dwelling units are viable and realistic solutions to urban issues and that they may foster healthy, sustainable communities. Accessory dwelling units offer the additional benefits of: 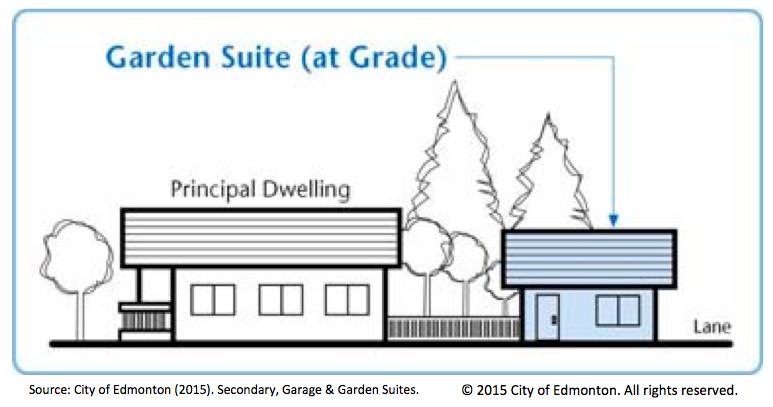 An initiative in which the provincial government subsidizes the installation of detached accessory dwelling units on residential lots where owners have agreed to have a unit built for the purpose of housing immigrants and refugees would enable relatively rapid yet sustainable resettlement. However, it should be noted that depending on municipal building and development policies, permitting processes might prolong the implementation of such a strategy.

Delivery of this program would include:

As part of the subsidy agreement, government-set rental rates would be paid to both the property owner and the government. The partial rental income acquired from having the accessory dwelling unit rented out, the potential for future rentals, and the lack of costs associated with participation create incentive for existing residential homeowners to join this program, while allowing the costs of unit installation to be recovered.

Several builders of detached accessory dwelling are operating in Western Canada and may be contracted to build and install units in municipalities in partnership with the government of Alberta and current residential homeowners.

A comprehensive housing and resettlement strategy also requires direct participation from sponsorship groups and agencies to ensure resettlement results in healthy and positive integration into established communities. Participation from sponsorship groups will facilitate the pairing of newcomers with participating homeowners from whom they would be renting, thus encouraging positive social relations between newcomers and existing residents. This approach aids in removing barriers to integration by reducing immigrant isolation and encouraging communities and existing residents to be more open to immigrant and refugee resettlement. 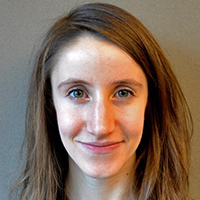 Ashley Salvador is a fourth-year student at Dalhousie University, where she is completing a Bachelor of Arts in Sustainability, Sociology, and Political Science. Her studies are focused on issues of social and environmental sustainability, political economy, urban sociology, and structural inequality. Ashley has experience working with Alberta Municipal Affairs on housing related reports and is currently completing her honours thesis on affordable housing and accessory dwelling units in Canada.