In response to the latest Alberta revenue crisis, Premier Jim Prentice has increasingly been beating the austerity drum.

In recent weeks, one of Prentice’s main talking points has been that Alberta's public employees need to help pay for the province's current revenue crisis by agreeing to a wage rollback. To drive the point home, the premier even hastily arranged a press conference to announce a 5% reduction in his own pay and that of his cabinet colleagues, saying of the need for concessions from public sector workers, "I think it's fair to say the discussions will involve everyone who is paid by the citizens of Alberta. Albertans ... expect people who work for the government, whether we are elected or whether we are people who are employees to share part of that burden." The cabinet move was followed last Wednesday by Alberta MLAs.

But Prentice is not only asking public employees  – who, it should be noted, are in the middle of multi-year contracts fairly negotiated with the government  –  to help pay for the crisis that the provincial Progressive Conservatives created, the premier is also asking all Albertans to help pay for the crisis through various regressive taxes and fees.

But the premier's discussion of austerity measures simply doesn't make sense. On the face of it, austerity is about cutting government expenditures, but the Alberta government doesn't have a spending problem. As Parkland research has pointed out, when compared to other Canadian provinces Alberta is in the middle of the pack on expenditures when provincial gross domestic product is taken into account. 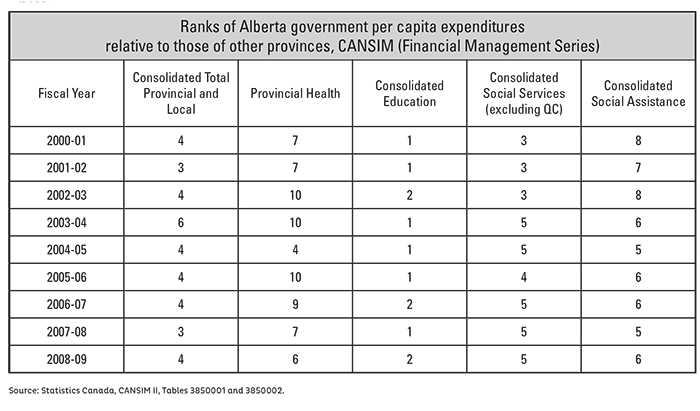 In other words, the current crisis in Alberta is a revenue crisis, and the crisis is a direct result of decisions made by previous Tory governments.

How did the PCs create the current crisis? In large part, by introducing a flat income tax system and a low corporate tax rate at the turn of the millennium. These changes have resulted in Alberta having the lowest corporate tax rate in North America, and the government has bragged in the past about the billions of dollars in tax revenue it leaves on the table every year.

Conservatives at both the provincial and federal level have been telling the public for years that low corporate tax rates attracts foreign capital, and that oil and gas companies create a lot of jobs. Neither of these claims stands up to scrutiny.

If the provincial Tories had maintained the old tax rate of 15.5% for large corporations, the exploitation of the tar sands would have continued, as it has in oil-rich jurisdictions around the world with higher tax rates. The truth is that it is moments of large market fluctuations like the downturn we are currently experiencing, not the province's old corporate tax rate of 15.5%, which cause corporations to slow their investments and cut costs, often through layoffs.

Despite this, the provincial PCs cut this key source of provincial revenue by 35% in 2001, bringing the corporate tax rate for the largest corporations operating in the province to the current 10% rate, which is substantially below the national average of 12.6%.

As Parkland pointed out in our February 2013 report, Stabalizing Alberta's Revenues: A Common Sense Approach, "Since 1990 Alberta revenues from corporate taxes have remained under $5 billion: corporate profits skyrockted from under $10 billion to well over $50 billion. Despite a significant drop related to the Great Recession of 2008, corporate profits are again on the rise and today sit around $30 billion. (All figures in constant 2002 dollars). Over the past 20 years, corporations operating in Alberta have amassed substantial wealth while making consistently very limited contributions to funding the services, such as health and education, that Albertans need – or even to covering the costs that corporations impose on the provincial government, such as those for infrastructure, environmental monitoring, and regulation."

Had the provincial PCs maintained the 15.5% tax rate on large corporations over the past 15 years, the government would have collected an additional $25 billion in revenue. In 2014 alone, the provincial revenue foregone due to the reduced corporate tax rate is about $3.2 billion.

The second claim frequently made by the provincial and federal governments is that oil and gas corporations deserve lower tax rates because they create a lot of jobs, but the truth is that the oil and gas sector of the Canadian economy creates far fewer jobs than are created in other sectors.

The following chart from the Canadian Centre for Policy Alternatives, based on the models of the Canadian Occupational Projection System (COPS), shows the projected annual job creation of various sectors of the Canadian economy for 2012 to 2022, showing that over this 10-year period the oil and gas sector is projected to generate 4,500 jobs annually, just 2.9% of the total jobs created in Canada. 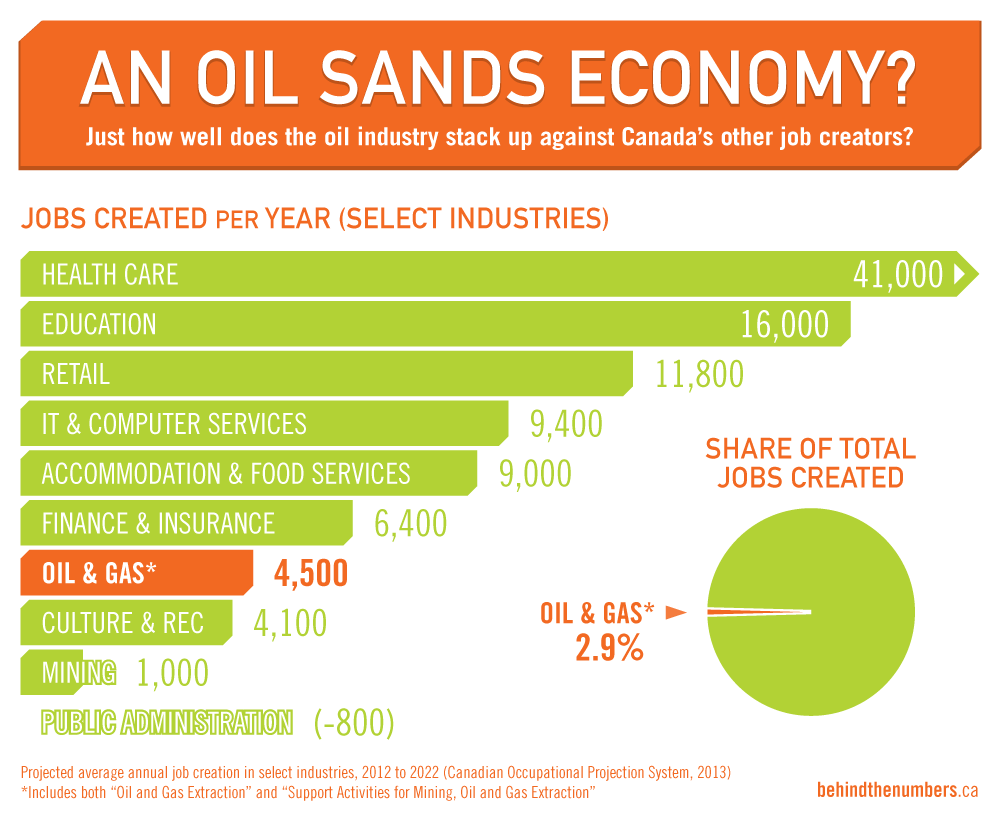 Even though the vast majority of these jobs are projected to be created in Alberta, these projections don't accurately represent what is currently happening in the Alberta labour market.

Projections from the Canadian Occupational Projection System (COPS) show that even before the current drop in oil prices, counting on the oil and gas sector to be an employment driver in the coming decade isn't a safe bet. According to COPS, "Productivity gains [in oil and gas extraction] will be largely driven by ongoing technological improvements, particularly for the extraction of non-conventional oil and gas ... and the fact that the production capacity in oil sands and offshore fields is increasing while becoming less labour intensive.  As a result, real GDP growth in the industry is projected to accelerate from 2013 to 2022, averaging 2.7% annually, while employment is projected to increase by a modest 0.2% annually."

In addition, the official labour market numbers provided by Employment and Social Development Canada shows that in the final quarter of 2014, 8,700 jobs were lost in the forestry, fishing, mining, quarrying, oil and gas sector: "On a quarterly basis, the province’s forestry, fishing, mining, quarrying, oil and gas industries employed an average of 8,700 fewer workers. Breaking down the fourth quarter, monthly increases in December (+1,300) and November (+4,700), were outweighed by a large decline in October (-23,800). Compared to the same quarter last year, these industries employed 15,700 fewer individuals — by far the largest annual decline of any provincial sub-sector."

The sector that grew the most was the accommodation and food services sector (17,400 jobs). In sum, a lot of well-paying jobs were lost in Alberta in recent months and a lot of precarious, low-wage jobs were created.

So, take what you're hearing from the provincial and federal governments with a big grain of salt.

Should Prentice proceed with rolling out an austerity program in the budget expected next month, inequality will certainly increase in Alberta, and Alberta is already the most unequal Canadian province.

In Canada since the 2008-2009 global financial crisis, we have seen an increasing number of people working precarious jobs. Last year, for example, the Canadian economy created just 32,000 permanent jobs, compared to 110,000 temporary/precarious jobs.

In Alberta, we're unfortunately becoming used to headlines about oil companies slashing thousands of jobs, and the first workers getting sacked are those working precarious contract jobs.

Given all this, in response to the current fiscal reality in Alberta Premier Prentice should do three things instead of making the problem worse by implementing an austerity agenda.

The first two changes relate to wages and job security, namely Prentice should raise the provincial minimum wage and focus on creating more secure jobs and adding to the job security of current and future public employees and other workers in the province. If more Albertans were working secure jobs with decent pay, then more money would be circulating in our economy, including into our provincial coffers to pay for much-needed improvements in our public services and infrastructure.

Prioritizing wage-led economic growth would reduce economic inequality and insecurity, and those two impacts would in turn make Albertans healthier. Parkland Institute research on the social determinants of health has shown that the growing inequality in Alberta over the last 15 years has resulted in people getting sick more often, so while austerity aims to reduce government spending, it actually ends up increasing the public resources needed to run our health care system.

The third and most important thing Prentice should focus on instead of austerity is to make our provincial tax systems more fair. He can do this by restoring stability to Alberta's revenues by increasing the tax rate on large corporations from 10% to at least 12%, and by returning the province to a fair and progressive personal income tax system as we had prior to 2001.

Simply put, Albertans should not and do not have to pay for the revenue crisis the Tories have manufactured. An increase to the provincial minimum wage and a focus on the creation of secure jobs, a fair and progressive income tax system, and a more reasonable corporate tax rate would result in Albertans enjoying a more equal and healthier society. The question now is whether Premier Prentice will be willing to do it.