Family Day on the Treadmill

Alberta Families at Risk of Too Much Stress 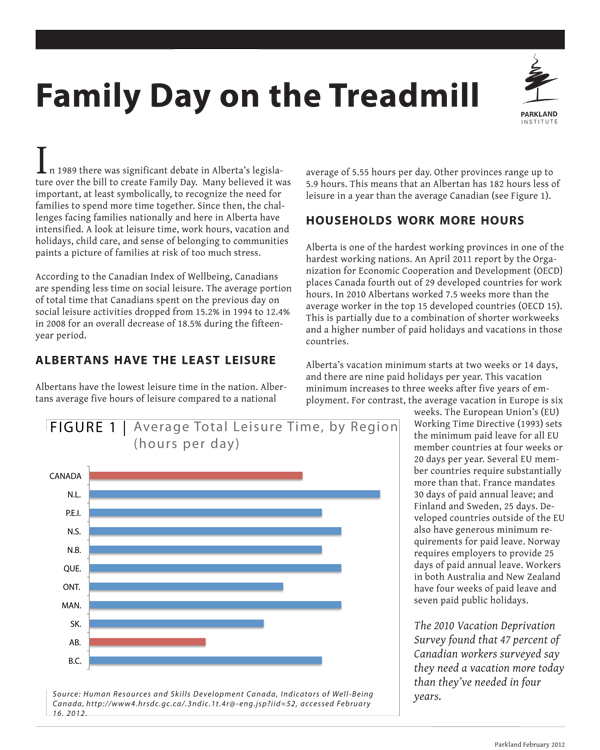 In 1989 there was significant debate in Alberta’s legislature over the bill to create Family Day. Many believed it was important, at least symbolically, to recognize the need for families to spend more time together. Since then, the challenges facing families nationally and here in Alberta have intensified. A look at leisure time, work hours, vacation and holidays, child care, and sense of belonging to communities paints a picture of families at risk of too much stress.

According to the Canadian Index of Wellbeing, Canadians are spending less time on social leisure. The average portion of total time that Canadians spent on the previous day on social leisure activities dropped from 15.2% in 1994 to 12.4% in 2008 for an overall decrease of 18.5% during the fifteen year period.

Albertans have the least leisure

Albertans have the lowest leisure time in the nation. Albertans average five hours of leisure compared to a national average of 5.55 hours per day. Other provinces range up to 5.9 hours. This means that an Albertan has 182 hours less of leisure in a year than the average Canadian (see Figure 1). 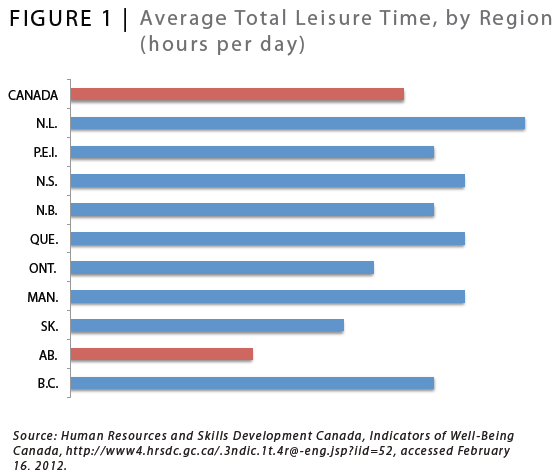 Alberta is one of the hardest working provinces in one of the hardest working nations. An April 2011 report by the Organization for Economic Cooperation and Development (OECD) places Canada fourth out of 29 developed countries for work hours. In 2010 Albertans worked 7.5 weeks more than the average worker in the top 15 developed countries (OECD 15). This is partially due to a combination of shorter workweeks and a higher number of paid holidays and vacations in those countries.

Alberta’s vacation minimum starts at two weeks or 10 days, and there are nine paid holidays per year. This vacation minimum increases to three weeks after five years of employment. For contrast, the average vacation in Europe is six weeks. The European Union’s (EU) Working Time Directive (1993) sets the minimum paid leave for all EU member countries at four weeks or 20 days per year. Several EU member countries require substantially more than that. France mandates 30 days of paid annual leave; and Finland and Sweden, 25 days. Developed countries outside of the EU also have generous minimum requirements for paid leave. Norway requires employers to provide 25 days of paid annual leave. Workers in both Australia and New Zealand have four weeks of paid leave and seven paid public holidays.

Alberta’s families are further stressed by lack of access to affordable quality childcare. According to a Parkland Institute March 2010 fact sheet, the government of Alberta allocates the lowest number of dollars for regulated child care spaces, per 0-12 aged child, in Canada, and has done since 2003. Only 17% of children aged 0-5 in Alberta have access to a regulated child care space; Alberta is in the bottom three in Canada. Alberta’s total number of regulated childcare spaces has not grown appreciably since 1992, though the population and the economy have both grown substantially. High working hours, low vacation entitlement, and lack of childcare is not a recipe for a healthy productive workforce or community.

Studies have found longer hours linked to health risks such as depression, unhealthy weight gain, and an increase in smoking and drinking, it also is linked to higher risks of injury at work. Studies have also found that longer work hours can reduce time needed to “’unwind’ when away from work; nurture family relationships and parent effectively; provide non-financial support to extended family members; and engage in voluntary community activities.” 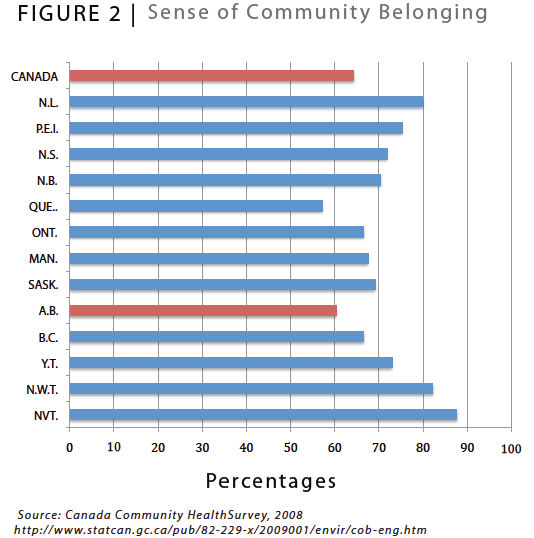 What does this mean for communities?

Long work hours can also be detrimental for communities, by limiting the time and energy people have for community engagement, and undermining and weakening neighborhood social networks and trust.

It is not coincidental then that Albertans rank among the lowest in the nation for sense of belonging to their communities.

Alberta needs more than a statutory holiday named after families. This Family Day should be a day to take pause and reflect on policies needed to properly support Alberta’s families.

Rifkin, Jeremy, The European Dream. How Europe’s Vision of the Future is Quietly Eclipsing the American Dream. Jeremy P. Tarcher/Penguin, 2004.