Alberta’s deficit and debt aren’t problems (yet), but revenue is

Six months after assuming power in the province, Alberta's new NDP government has introduced the first budget of its mandate.

Assuming the budget eventually passes – which, given the NDP's majority in the Legislature is a pretty safe bet – it will be the first time the province has a budget that takes into account the precipitous decline in the price of oil that began 15 months ago.

Former Progressive Conservative premier Jim Prentice introduced a budget in March when the price of oil was in the $50-$60 range, but called an early election – which the 44-year-old dynasty lost in spectacular fashion – prior to passing the budget. Prentice had planned to run a $5 billion deficit, cut health care and education spending, lay off hundreds of health care workers, not pay for growth in K-12 student enrollment, increase personal income taxes slightly, introduce a health care levy, and leave corporate income taxes as they were.

By contrast, the NDP government on Tuesday released a budget at a time when the price of oil is mired in the $40-$45 range. The NDP budget projects a $6.1 billion deficit for fiscal year 2015-16, which, not coincidentally, is almost the exact amount Alberta's resource revenue has declined compared to last year. The NDP budget increases health care spending by 2.2%, covers new K-12 student enrollment, and moves toward reducing school fees.

In short, the Prentice budget would have set Alberta on a five-year austerity path that would have even made former premier Ralph Klein blush. The NDP, by contrast, has prioritized maintaining public services in the province and investing 15% more in infrastructure than Prentice had planned to do.

The governments of former premier Prentice and current Premier Notley both planned to borrow large amounts of capital to maintain and grow our public infrastructure. Prentice's plan was to see borrowing increase to $31.2 billion by 2018-19, while Notley's plan is to increase borrowing to $47.4 billion by 2019-20, before beginning to pay down the debt.

In the spring, Alberta's official opposition Wildrose Party raised concerns about the deficit then-Premier Prentice planned to run and the debt his government was going to take on to build needed infrastructure, and the Wildrose playbook hasn't changed in the intervening months. The day before the budget was tabled, Wildrose leader Brian Jean predictably criticized the anticipated size of the deficit and the government's announcement that it would not balance the books until 2019-20, a year later than the government said during the election it would aim to get the province back in the black.

The Wildrose response to the NDP budget again took aim at the debt the government is going to rack up to build schools, hospitals, and roads, calling it a budget "plagued with risky economic theories" and "fantasy" economic projections.

Like the official opposition, many Albertans are concerned with the government's plan to run deficits this year and in the following three years before projecting return to a surplus position in 2019-20, and with Alberta’s increasing public debt.

However, as illustrated below, Alberta's deficit and debt are not problems, at least not yet. Rather, the Government of Alberta's problem right now is that it doesn't collect enough revenue to maintain the province's social programs and infrastructure in the long term.

Let's look at the deficit first.

Shortly after the Alberta budget was announced on Tuesday, the Royal Bank of Canada released their revised Canadian Federal and Provincial Fiscal Tables, which help put Alberta's current fiscal situation in perspective.

As you can see from the following chart, "Budget Balance Relative to GDP" (Gross Domestic Product), most Canadian provinces are running deficits this year, in part because Canada has been in a minor recession for part of this year. British Columbia is actually the only province projecting a surplus for this year, Quebec is hoping to break even, and the remaining eight provinces, including Alberta, are forecasting deficits. 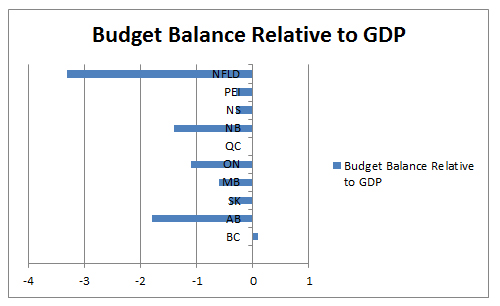 While Alberta's deficit of $6.1 billion sounds very large, relative to the size of our provincial economy it is not. The deficit is not insignificant, of course, but at 1.8% of GDP it is, as University of Calgary economist Trevor Tombe put it in a recent article, "completely manageable."

The chart, "Net Debt (Million $)," shows that, despite significant increases in accumulated debt since 2012-13 – driven in large part by the approach started by the Redford government to borrow to finance capital (infrastructure) spending – Alberta remains the only province to have negative net debt, meaning the province has financial assets (savings) in excess of its total accumulated debt. 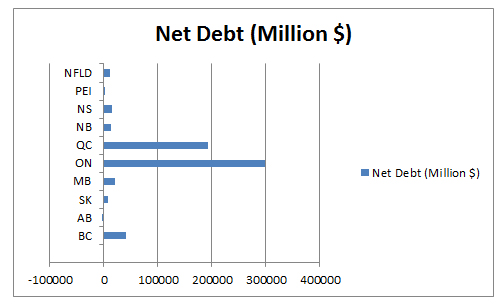 As University of Alberta economics professor emeritus Melville McMillan explained in his recent Parkland report, net financial assets in 2014-15 were $20.1 billion, compared to $12.9 billion in accumulated debt. RBC's 2015-16 estimate is that Alberta's financial assets will still exceed its debt by $3.4 billion by the end of this fiscal year.

But, you might ask, how large is each province's debt compared to the size of its economy? The following chart, "Net Debt to GDP Ratio," shows that six provinces have debt-to-GDP ratios of 30% to 40%, and that Quebec's ratio is the highest of all provinces, at 49.5%. Alberta's ratio for 2015-16, by contrast, is -1.0%. Again, this means we are the only province that has no net debt. 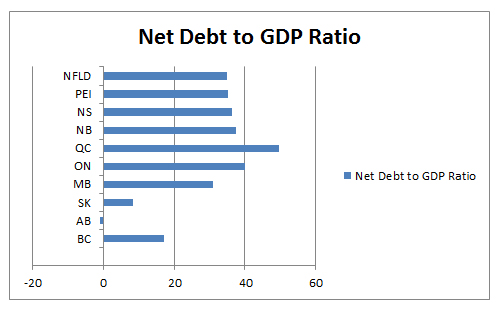 But the reason why I bring this point up using the debt to GDP ratio is that the provincial government did something in its budget speech that was very clever politically.

The NDP announced that they were introducing "a new Fiscal Planning and Transparency Act that will ... limit Alberta government borrowing to 15% of GDP," or about $55 billion (the current plan is to increase borrowing to $47.4 billion over the next five years and then begin to reduce the debt).

This new legislation by the NDP is smart because it addresses the main concern of the Wildrose head on. The official opposition claims that the government plans "to recklessly hike debt" and that the province's triple-A credit rating may be downgraded as a result of the NDP's plan.

The NDP's political strategy on this front seems to be that their new legislation may prevent a reduction in our credit rating. The legislation will also ensure that Alberta's provincial debt will not even surpass half of the over 30% debt to GDP ratio that six other provinces are currently dealing with.

Last but not least, let's look at provincial revenue. While the province's deficit and debt are not (yet) problematic, our current low level of public revenue generation is the issue that we should be focusing on.

From 2007-08 to 2014-15, the Tories drew down our financial assets and began to borrow to fund infrastructure spending, and the NDP government plans to continue borrowing for needed infrastructure. Dwindling financial assets and plans to continue borrowing means that unless something is done, Alberta's enviable position as the only province with no net debt won't last.

The good news is the NDP plans to maintain the real value of the Heritage Fund by contributing about $300 million per year to ensure that the fund is inflation-proofed. It may be that the government's investment income still includes extracting earnings beyond inflation-proofing from the Heritage Fund for general revenue. The spring 2016 budget should provide more clarity on this issue.

The bad news is the government plans to borrow for operations starting next year, the first time the provincial government has borrowed money to cover operating social programs since 1993-94. This is perhaps the clearest sign that Alberta's public revenue is currently insufficient, unless of course the government is completely wrong and Albertans actually want drastically reduced funding for health care, education, and human services.

The following chart, "Revenue Relative to GDP," shows that Alberta brings in far less money relative to the size of its economy compared to all other Canadian provinces. 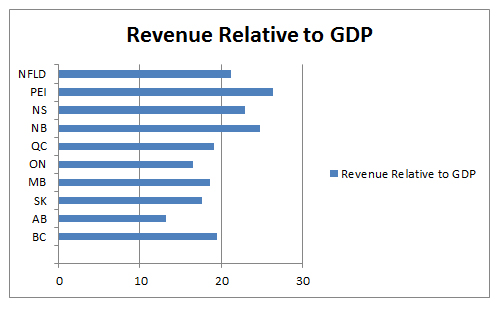 We do, however, need to be cautious about comparisons of public revenue to GDP because Alberta has a very capital-intensive economy, meaning that there is a large share going to capital and replacement/maintenance of the capital stock.

Having made that caveat, the Government of Alberta estimates that our "tax advantage" in comparison to BC, the next-lowest-taxed province after Alberta, will remain at minimum $8.5 billion this year. So there is still room to move on the revenue side of the Alberta ledger, as Parkland Institute's recent report breaks down in detail.

The new provincial government has already begun to take steps to stabilize the province's public finances by raising taxes on high-income earners and large corporations, and by hiking the tobacco tax, the locomotive fuel tax, the liquor markup, and the insurance premium tax by small amounts.

These measures are a reasonable start given the current weakness of the Alberta economy, but they are insufficient to deal with the revenue problem that the new government has inherited after decades of detaxation policies. In the coming months the government will need to consider other sources of revenue, potentially including raising resource royalties, the price on carbon, and income taxes for people earning less than $125,000 per year.

Although Alberta doesn't have a deficit or a debt problem yet, we will before too long if we don't deal with our revenue problem.

Ian Hussey began his work as a research manager at the University of Alberta’s Parkland Institute in 2014, and he earned a career appointment in 2019. He is a steering committee member of the Corporate Mapping Project, a seven-year initiative supported by the Social Science and Humanities Research Council of Canada (SSHRC) and focused on the oil, gas, and coal industries in Western Canada (2015-2022). Ian is the author of "Job Creation or Job Loss? Big Companies Use Tax Cut to Automate Away Jobs in the Oil Sands" (Parkland Institute, 2022), and of “The Future of Alberta’s Oil Sands Industry: More Production, Less Capital, Fewer Jobs” (Parkland Institute, 2020). He is the co-author with Emma Jackson of “Alberta’s Coal Phase-Out: A Just Transition?” (Parkland Institute, 2019).