Six things Albertans should know ahead of Budget 2015

Here are six things from that report that Albertans should know in advance of the October 27 release of the new government's first full budget. (For a more complete explanation, you can read the full report.)

1. Spending in Alberta is not "out of control"

Despite claims to the contrary, per capita spending in Alberta has been essentially flat since 2008-09. In that year, expenditures in the province were $10,138 per person, and by 2014-15 per capita expenditures had only increased to $10,464. 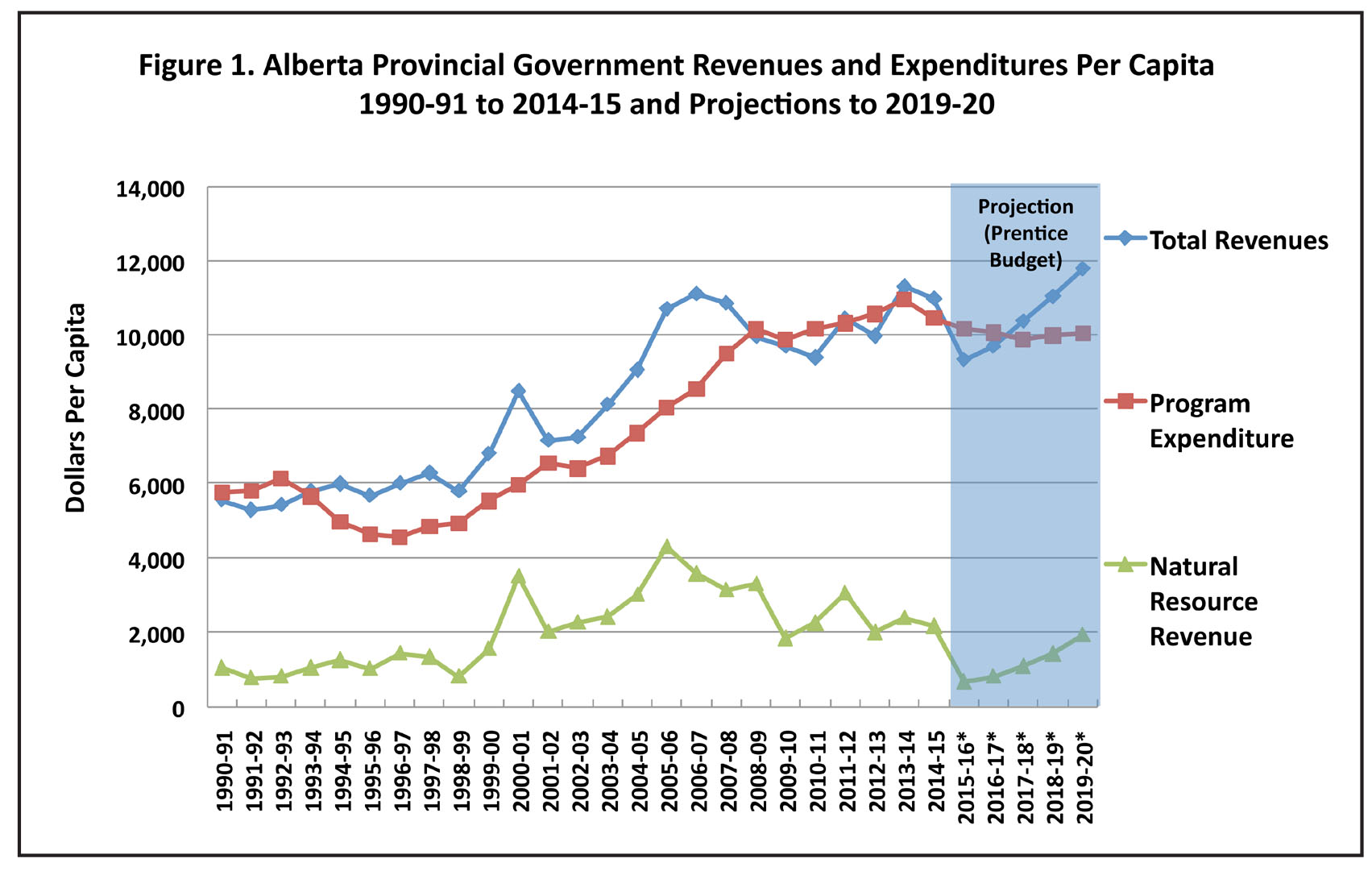 This is even more clearly illustrated when population, inflation, and increases in incomes are all taken into account (as is done by looking at measures of average household income). From 1999-2000 to 2013-14, program spending in Alberta remained constant, averaging 20.3% of household income, and only ranging from a low of 19.4% to a high of 21.7%. 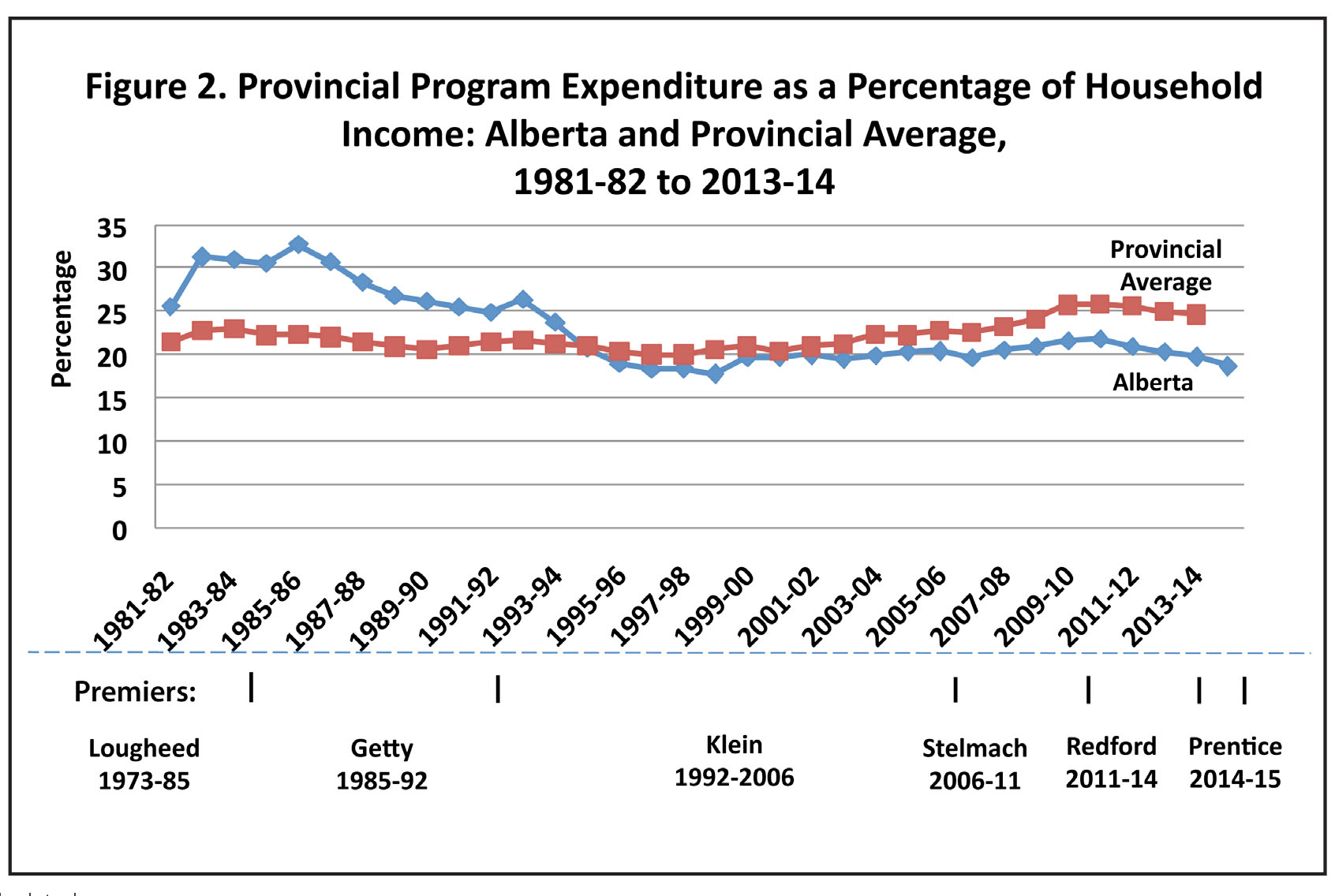 The figure also shows that since 1995-96, Alberta's expenditures have represented a smaller percentage of household income than the average province, which brings us to the second point to remember on bugdet day ...

2. Alberta does not spend more than all other provinces

For the past two decades, Alberta has ranged from second to seventh highest in spending compared to other provinces, and has on average ranked fourth, spending just 3.2% more than the provincial average. For the past five years, program spending in Alberta has been remarkably average. 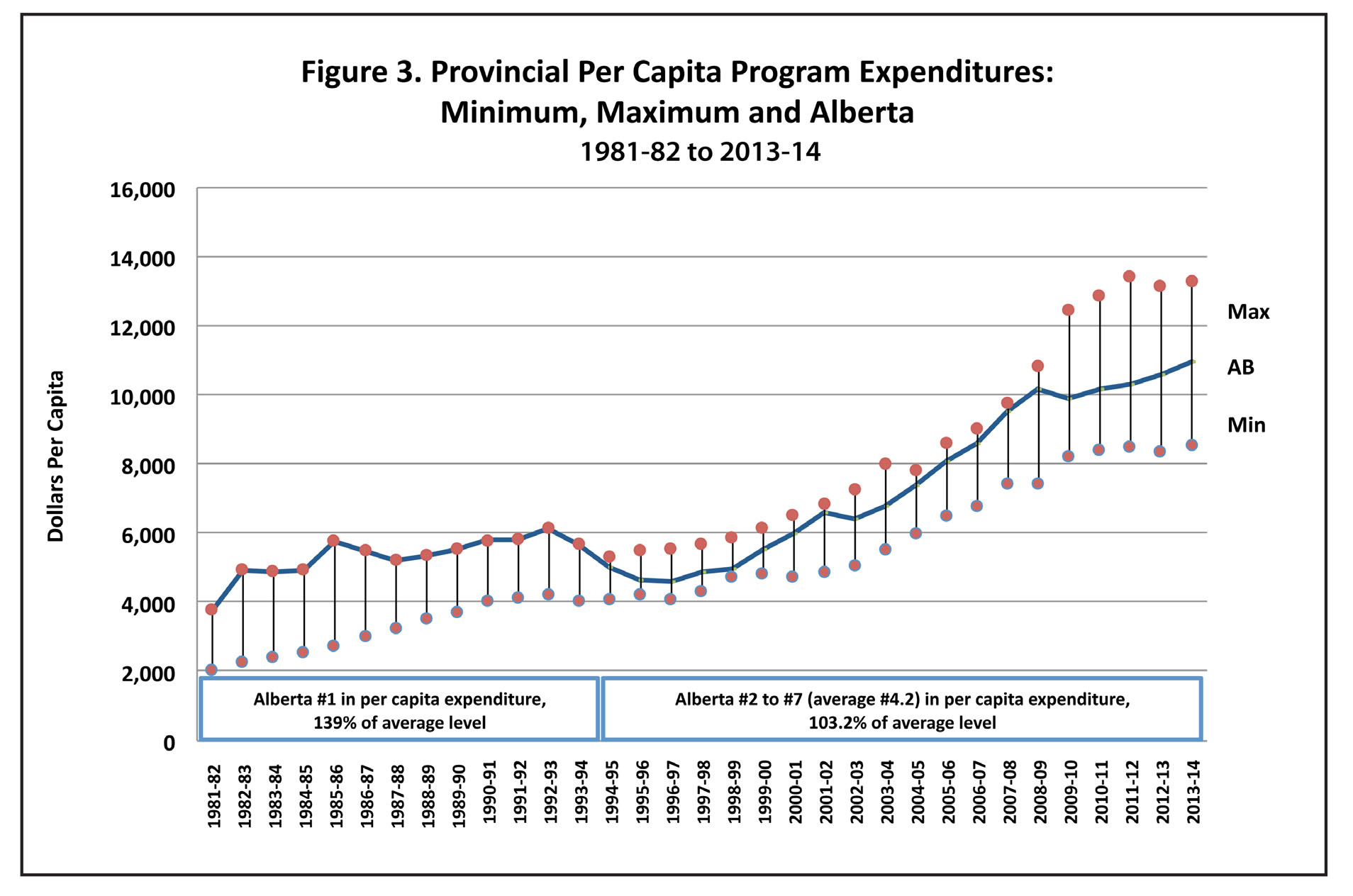 3. Alberta has no net debt 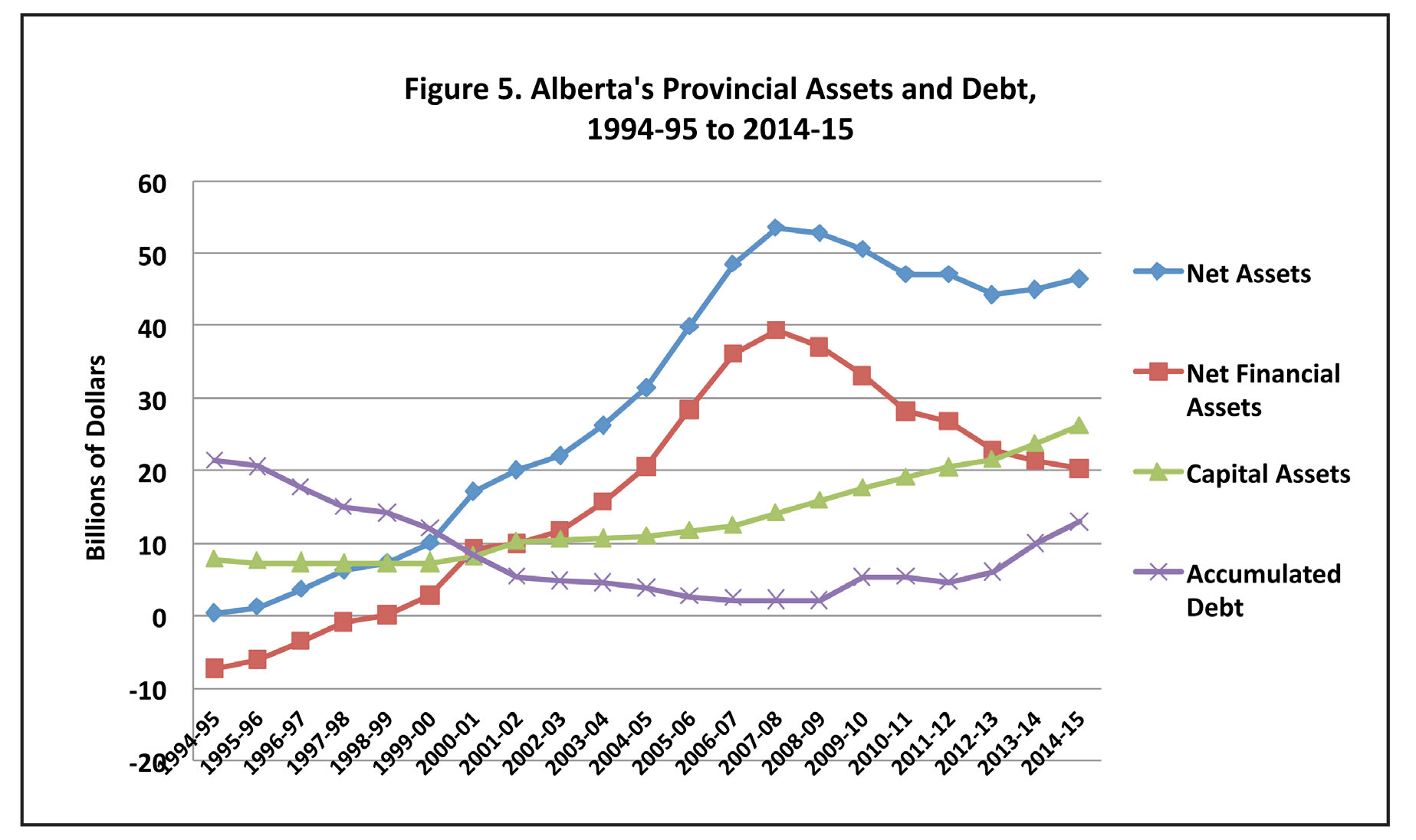 However, declining financial assets (down from $39.4 billion in 2007-08) and plans to continue borrowing to finance capital spending means that unless something is done, this situation won’t last.

4. Alberta does have a budget problem (and it's worse than most people think)

The drop in global energy prices in late 2014 has had a serious impact on Alberta’s revenues, which are expected to be roughly $7.2 billion less in 2015-16 compared to the previous year. This revenue loss translates into an expected deficit of at least $5.7 billion.

In recent years the province has increasingly turned to borrowing to finance needed capital (infrastructure) spending. In 2014-15, the province borrowed $3 billion to help finance $5.9 billion in capital projects, and further borrowing will be necessary if projected capital investments are to continue. The Prentice budget projected borrowing an average of $5.5 billion annually from 2015-16 to 2017-18, and debt for capital purposes to reach $31.2 billion in 2018-19.

Borrowing for capital expenditures is not included in the reported “deficit,” which includes total revenues but only operating expenditures. As a result, though confusing, the province can report a balanced budget while still needing to borrow to finance its total expenditures.

Taken together, the combination of program and capital spending reveals that Alberta’s true deficit is actually in the order of $10 billion.

Previous provincial governments have covered up the depth of the province’s fiscal problems since at least 2008-09 by depleting the province’s savings and borrowing for capital investment even when resource revenues were high. This is evidence of a structural deficit – a deficit not due to a cyclical downturn in the economy, but one due to government revenues even in good times not being sufficient to meet expenditures.

The existence of a structural deficit means that the provincial government needs to find a more realistic long-term balance between expenditures (including both program and capital spending) and revenues.

While there are undoubtedly ways to find savings in government spending, as noted above our level of spending relative to average household income (which takes into account population, inflation, and increases in incomes) is already well below the provincial long-term average, and is approaching the levels last seen during the depth of the Klein cuts.

More significant cuts – for example increasing spending only to account for population growth, which was essentially Jim Prentice’s budget plan – would mean spending at levels that Albertans have never seen (falling to 16% of household income). To put the severity of such an austerity budget in perspective, the spending level implied by the Prentice budget would be equivalent to eliminating schooling from the provincial budget. Even allowing spending to increase with inflation and population growth would see it decline to 17.7% of household income by 2019-20.

Put simply, unless Albertans are willing to accept drastically lower levels of government services and capital spending – cuts far deeper than even the Klein cuts – increased revenues will be required.

6. Alberta has room to move on the revenue side

The good news is that Alberta has a tremendous capacity to raise more revenues while still remaining the lowest-taxing province in Canada. 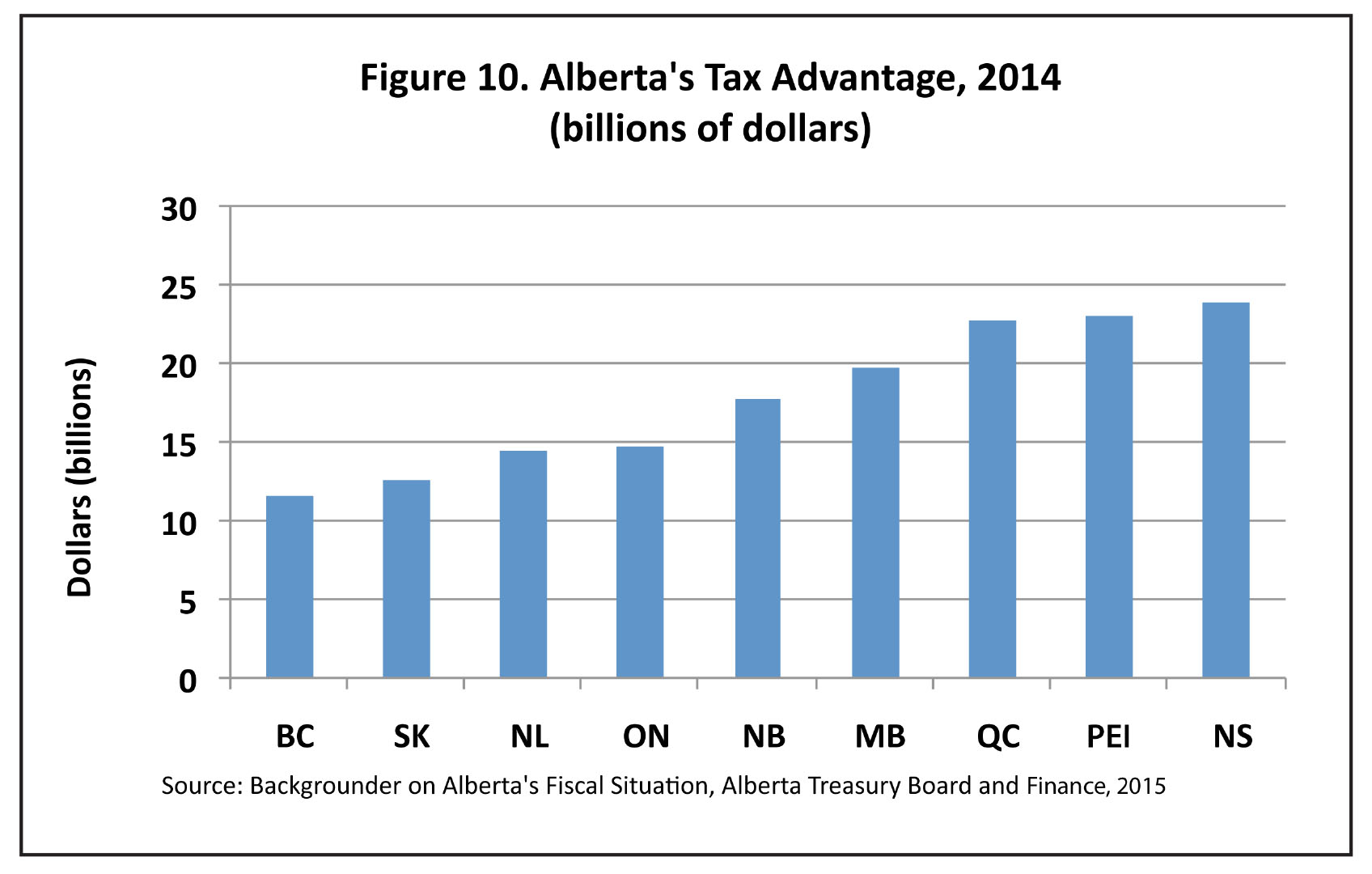 While nobody necessarily wants to pay more taxes, we must recognize that Alberta’s taxes are extremely low compared to other provinces. Albertans in 2014 paid $11.6 billion less in taxes compared to citizens in BC, the next-lowest-taxing province, and a whopping $24 billion less than citizens in Nova Scotia.

If government resource revenues recover as slowly as projected, by 2019-20 the Alberta government could maintain its current level of program spending (18.7% of household income) and eliminate the need to borrow for capital projects and still maintain a “tax advantage” of $5 billion compared to the next-lowest-taxing province. Under such a scenario the average Albertan would still pay $1,200 less in taxes compared to British Columbians (and even less compared to all other provinces).

That would mean returning Alberta’s taxation to a level roughly equivalent to the pre-boom levels of the late 1990s. 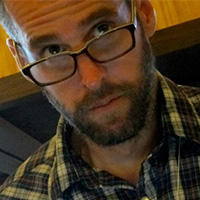 Scott Harris is the former communications coordinator for Parkland Institute.