Fairness and Justice for All 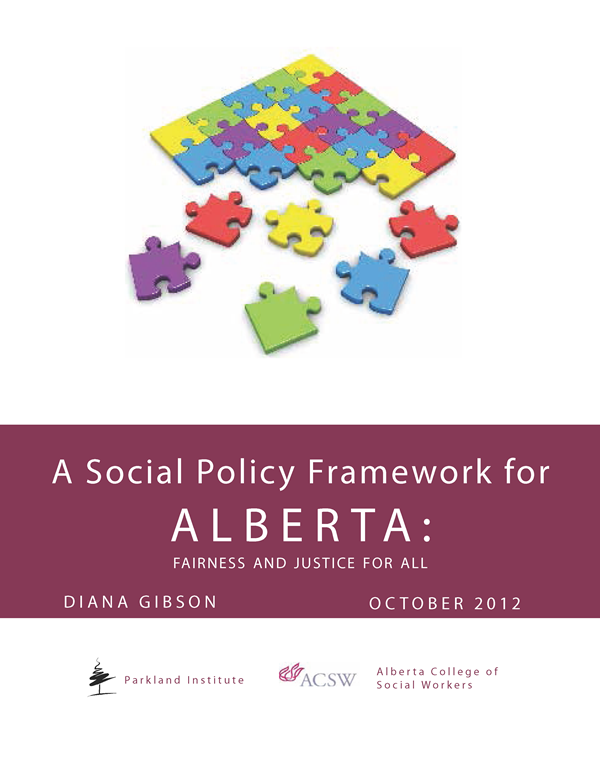 Alberta is blessed with abundant lucrative natural resources. The province is uniquely positioned to lead the nation in quality of life and wellbeing. It is time to ensure that all Albertans share in the province’s wealth. Albertans from across the income spectrum benefit from efforts to reduce disparity.

Disparity erodes social and economic wellbeing for everyone across the income spectrum. Prominent national and international institutions such as the International Monetary Fund, the World Bank and the Conference Board of Canada agree that pronounced inequality has a negative impact on the economy. Recent research has made clear that reduced income inequality improves the efficiency and duration of economic growth. Other research clearly shows that inequality is correlated with numerous social challenges and negatively affects the quality of life of all Albertans.

This report is an update of an Alberta College of Social Workers (ACSW) discussion paper, Social Policy Framework 2010: Visioning a More Equitable and Just Alberta, which mapped the disparity gap and its effects on low-income and middle-income Albertans. As a component of ACSW’s Closing the Disparity Gap Project, it analyzed the causes of Alberta’s social and economic disparities and offered concrete recommendations for policy choices geared to reducing social and economic disparities in Alberta.

The 2012 update builds on this earlier work by examining new research on the causes, consequences and impacts of inequality, exploring how the recession and recent recovery have affected disparity, and by illustrating the need for change in Alberta’s system of taxes and transfers.

This study finds that Alberta’s top 1 percent are by far the wealthiest in the nation, while at the bottom Alberta has the most intense poverty. Disparity in Alberta is characterized by factors including:

Poverty is one of the drivers of inequality in Alberta. The poverty gap is a measure of the distance between the average income of a person in low income to the poverty line. In 2010 Alberta had the highest poverty gap in the country. The situation was exacerbated during the recent recession: the poorer the Albertan, the more severe the reduction in income. Other factors implicated in the intensification of poverty in Alberta include: limited protection for unemployed workers, high poverty rates for single-parent households, low social assistance rates, the lowest rate of unionization in the country and a meagre minimum wage.

Inequality has had a negative effect on the wellbeing of many Alberta families. As indicated by debt to income ratios, many families are economically vulnerable. Due to the low educational attainment and self-employment of many Albertans, working offers little protection from vulnerability. Given the province’s low minimum wage, working is not a ticket out of poverty.

For Alberta families, economic disparity is paralleled by broader inequality of wellbeing. Low- and middle income families endure longer working hours without adequate compensation in the form of increased incomes. As a result, many families lack both time and money.

Recent research indicates Canadians work longer hours and get less paid vacation than their European counterparts. Alberta is one of the hardest working provinces in one of the hardest working nations. Albertans average five hours of leisure per day compared to a national average of 5.5 hours. Working harder comes at significant cost to the province, as Albertans struggle to find time to invest in individual, family, and community wellbeing.
The system of federal and provincial income transfers has failed to effectively address inequality. Canada compares poorly with Nordic nations in terms of the successful stabilization of inequality through income transfer programs. The situation is particularly bad in Alberta, where the flat tax limits the province’s ability to respond to inequality through income redistribution. Indeed, the flat tax means that lower-income Albertans pay higher income tax rates than other Canadians, while those at the top of the income spectrum pay by far the lowest rates in the nation.

Along with the wealthy, corporations are given a big tax advantage in Alberta. Alberta’s general corporate tax rate is tied for lowest in the nation at 10 percent – and Canada has some of the lowest tax rates in the developed world. Because of low corporate taxes, the meteoric rise in profits experienced by Alberta corporations has brought relatively few benefits for most Albertans.

Low royalty rates have meant that Albertans have been deprived of significant oil and gas revenues. In 1971 Premier Lougheed’s cabinet established that 35 percent of revenues were to be captured through royalties. The government has failed to meet this target, which has deprived Albertans of the benefits of billions of dollars in provincial revenue. These foregone royalties might have been used to support key programs such as health care, education, and social supports, all of which may have reduced poverty and inequality while increasing social wellbeing.

Alberta is enormously prosperous – but the province’s prosperity is distributed in a drastically uneven manner. Economic growth has occurred in the context of widening inequality, intensified poverty and an erosion of social wellbeing. Not only have the rich benefited far more than the average Albertan household, but also many Albertans are becoming worse off. Alberta’s growth has been characterized by both a high concentration of wealth at the top of the economic spectrum and intense poverty at the bottom. The recent recession has only exacerbated this pattern. Alberta’s social and economic disparity is more pronounced for women and Indigenous people.

In its 2010 Social Policy Framework, the ACSW aimed to narrow the gap between wealthy and other Albertans in terms of both income and quality of life by developing a new policy paradigm that emphasized collective benefit over individual gain. The framework provides an excellent basis for future provincial government efforts to develop new social policies to address poverty and inequality in Alberta. As the 2012 update demonstrates, provincial government action to reduce disparity and improve the lives of all Albertans is needed now more than ever.

The key elements of the ACSW social policy framework are: