The economic argument for improved funding

The hashtag #mybabymybirth, chosen by the maternity care advocate organizations ASAC (Association for Safe Alternatives in Childbirth) and MCAN (MaternityCare Consumers of Alberta Network) for their recent social media campaign, implies that the push to reform Alberta’s midwifery funding is all about choice.

And for many of the families who support increased access to midwife care in Alberta, this is accurate. Proponents argue that midwife care during pregnancy, birth, and postpartum offers a low-risk and low-intervention alternative to conventional obstetrician-led care.

But significantly, especially given the current fiscal straits in the province, midwife care is also a low-cost model of care. And this is what takes the campaign beyond the usual clichés of birth plans and kiddie-pools, beyond claims that midwifery is some kind of “luxury” for crunchy granola moms who want to feel “empowered” by natural birth.

Beyond choice, there are significant equity, financial, and wider economic benefits to extending the midwifery model in Alberta.

While midwives were first regulated by the province in 1994, it was not until 2009 that midwife-led care was covered under the provincial health system. Prior to May 2009, parents who wanted a midwife had to pay out of pocket – commonly facing costs of between $3,000 and $4,000.

When the program was rolled out in 2009, funding was capped at 1,000 courses of care (CoC), which describes the supervision of a patient throughout their pregnancy, birth, and postpartum period. This is inclusive of overheads and administrative costs, and equates to approximately $4,600 per patient.

The caveat is that there is a concurrent cap on the number of courses of care available to each midwife: 40 annually (a full-time midwife in British Columbia averages 40 to 60 CoC). So while the province has incrementally increased the funding cap for midwife-led care over the last seven years – from 2,195 in 2012/13, to 2,527 in 2014/15, to 2,774 in 2015/16 – and the number of registered midwives in the province has grown from fewer than 20 to 94 at present, many midwives still cannot oversee their full allocation of 40 CoC, as the overall funding cap has already been reached. If all practicing midwives in Alberta were to fill their cap of 40 CoC, there would have been 3,760 midwife-led courses of care in 2015/16, instead of 2,774.

The effect of both caps is to limit both the number of families who can access midwife care and the ability of new and established midwives to secure enough patients for a viable livelihood. That’s part of the reason that “almost half” of the small number of new graduates from Mount Royal University’s inaugural Bachelor of Midwifery program were compelled to relocate out of province in order to practice.

At the same time, according to the Alberta Association of Midwives, there are over 1,300 families currently on the waiting list to access midwife care, and the wait list peaked last year at over 1,500.

Yet the wait list only shows part of the wider picture: families who are too far from midwife practices are simply not in a position to register on the list, leaving many in northern Alberta, rural communities, and Aboriginal communities without access.

These are precisely the demographics which benefit the most from midwife care. In her 2015 article in the Canadian Journal of Midwifery Research and Practice, Rebecca Sutherns contends that “midwifery is particularly well-suited to addressing the needs of women living in rural places.” A 2007 report on best practices for maternity care in rural and remote communities recommends that “midwifery care and midwifery training should be an integral part of changes in maternity care for rural and remote Aboriginal communities.”

Since provincial funding was introduced in 2009, access to midwifery care has shifted from an “ability to pay” basis to a lottery system. Who receives midwife care is determined on a first-come, first-served basis, rather than based on who would benefit most from midwife care. For many families, hoping to get one of the available courses of care is simply a gamble they can’t afford.

The system also privileges families in the Edmonton-to-Calgary corridor, where most of the registered midwives currently operate. For families living outside commuting distance – those living in rural or northern communities – the opportunity to access midwife care is even more limited.

Beyond the choice and equity arguments, there is an additional reason midwifery advocates have been spamming Health Minister Sarah Hoffman with their birth stories, baby photos, statistics, and earnest pleas: midwife care saves the health care system money.

On average, a course of care led by a midwife costs $1,200 less than a similar, uncomplicated pregnancy under obstetric supervision. If the family opts for a homebirth or birth centre, those savings increase to $3,900. Even a hospital birth with a midwife costs approximately $800 less than with an OB. With over 55,000 babies born in Alberta in 2015, those numbers potentially add up to a substantial cost efficiency for our health care system.

MCAN estimates that if every Alberta family who currently wanted midwife care was able to access it, the savings to the health care system would amount to $7 million annually.

When midwives in BC reached a five-year funding contract with the province in 2014, the Midwives Association of BC stated that an investment of $21 million in additional funding between 2014 and 2020 and full integration of midwifery into the health care system would result in midwives assisting in 35% of births by 2020, and generate cost savings to the health system of $60 million.

These figures contradict the narrative that in these harsh economic times, there is simply no money for “luxuries,” which was implied by Minister Hoffman’s response to the campaign: “Given the tough economic times we are in, we will have to balance the needs in this area with the pressures facing the rest of the system.”

Indeed, there are pressures on the maternity care system: data from the 2010 National Family Physician Workforce Survey suggests that while 42% of family physicians offered prenatal care, just 10% actually delivered babies. The Society of Obstetricians and Gynecologists of Canada, citing the Health Council of Canada, states that “we need more obstetricians, family doctors, midwives and nurses who can participate in collaborative maternity care teams.” Improving access to midwife care is an important part of the solution, in that it increases the number of maternity care providers and does so in a cost-effective way.

Minister Hoffman also issued a Facebook statement in response to the campaign, in which she pledged to “continue to review the best available evidence about how we can help ensure Albertans have the right care at the right time in the right place for the right investment.”

So how does Alberta’s funding for midwifery compare to other provinces, and what do lessons from other jurisdictions suggest about best practices for a funding model?

All jurisdictions except PEI and the Yukon have legislation to regulate midwifery; however, in New Brunswick and Nova Scotia, the programs have not been fully implemented, while in Newfoundland and Labrador the new regulations may not be online until 2019-21, after the initial timeline was rolled back. Midwife services are provincially funded in eight of the 13 jurisdictions, with limited coverage in Nova Scotia.

According to data from 2013/14, Alberta is tied for fifth place amongst the provinces and territories for midwife-attended births. At 4.1% of all registered births, Alberta is significantly behind British Columbia (19%), Nunavut (14.8%), and Ontario (13.5%), and is at less than half of the Canadian average (9% of births). 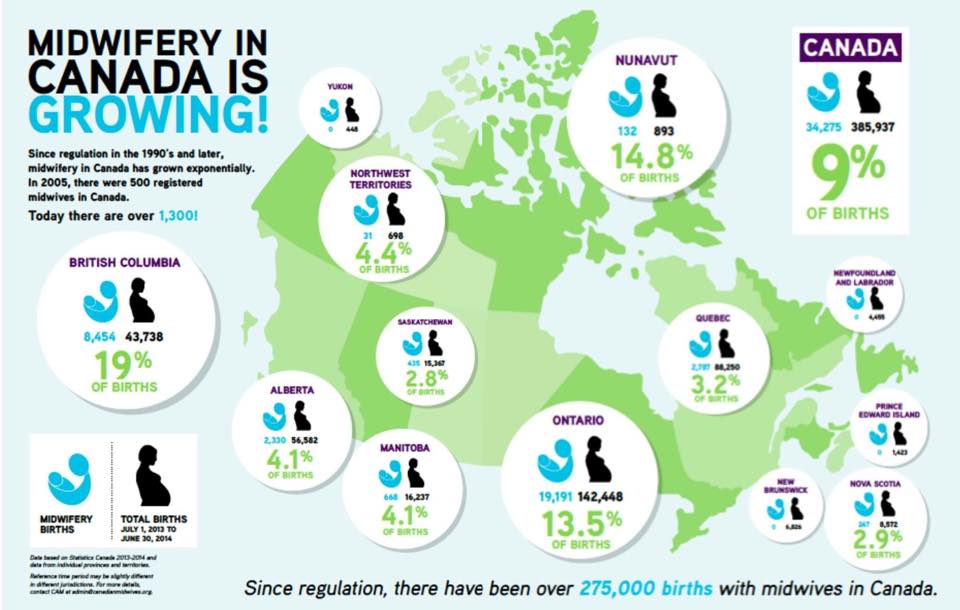 Compared internationally, Alberta is even further behind. The United Kingdom, Sweden, Australia, New Zealand, and the Netherlands are among the countries which achieve a majority of prenatal care and births through midwife care – over 70% of registered births, on average. New Zealand has one of the most successful models, with 90% of all births attended by midwives.

In a 2013 study comparing midwifery services in five provinces and territories, researchers found that the flexibility of funding models was one of the most important determinants of equity of care and access.

While Ontario is funded on a course-of-care basis similar to the Alberta model, the province offers top-up funding to practitioners caring for priority populations in rural and remote areas, an increase in compensation based on experience, and an annual 2% in the course-of-care remuneration.

In Manitoba, midwives are paid an annual salary, which “allows them to provide flexible services to diverse populations.” Since 2014, BC has followed a combination model of per course-of-care fees and a modest salary for midwives. While the amount of the salary was not disclosed at the time of the negotiations, BC midwives receive $3,000 per course of care as compared to $4,600 in Alberta, in addition to their annual salary.

Ultimately, however, the study showed that it is not necessarily a one-model-fits-all prescription that is needed, but that any model must be able to adapt to the unique needs of each jurisdiction.

The changes being called for by the Alberta Association of Midwives and MCAN are not limited to improving the lot of midwives; a more efficient model of maternity care will benefit physicians, nurses, hospital administration – and most of all, mothers and babies.

The groups are pushing for midwifery funding to be consistent, uncapped, and fully integrated into the public health system – just like physicians. They argue that funding should follow the mother and baby, not the provider. This change alone would see already-existing maternity funding allocated to expectant parents regardless of whether they choose physician or midwife care. Doing so would improve continuity of care, reduce wait lists and barriers to access for midwifery, and simultaneously relieve pressures on Labour and Delivery Wards and OBs, allowing them to direct resources to high-risk pregnancies and deliveries.

Alberta midwives – and expectant families – are now in a period of limbo, as the existing contract for Alberta Association of Midwives expires in March. In a January 15 meeting with Alberta Health Services, AAM was told that they should not expect to see this year’s funding numbers until late February when the 2016 budget is introduced.

As an editorial in the Calgary Herald last spring pointed out, “in an era of laments about everything that is wrong with health care in Alberta, it’s strange that the province would refuse to increase funding to a service that truly works.”