The Case of Highway Maintenance Privatization in Alberta 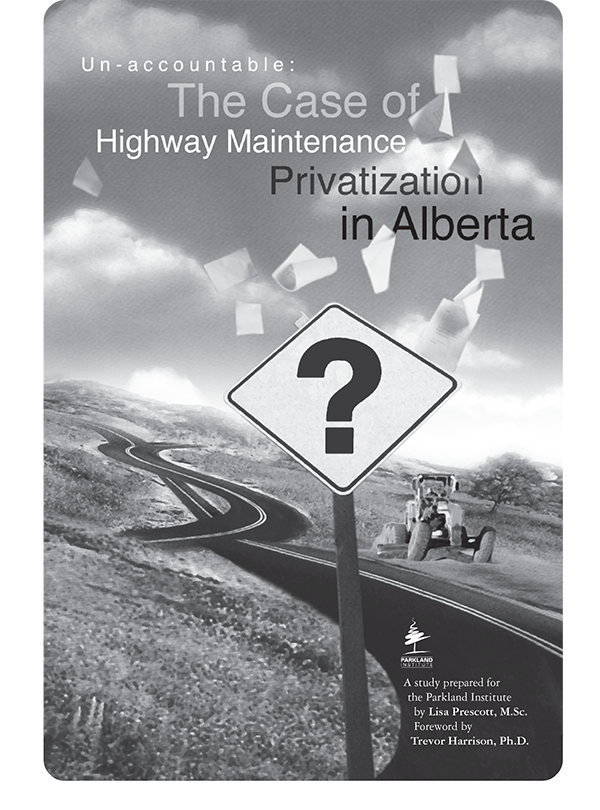 In 1995/96, the Government of Alberta decided to outsource all the maintenance on its 15,000 km of primary highways to private contractors.

In 1997, KPMG Consultants produced a study for the Government of Alberta with the intention of comparing the two systems. However, given that the system had been privatized for only one year they found that it was too early to compare the financial results of outsourcing highway maintenance to previous in-house methods.

Aside from this KPMG report, neither the government nor any other body has attempted a comparison of the previous government run program with the current privatized system. As it has now been eight years since the onset of privatization, enough time has passed to warrant a comparison.

This study attempted to compare the two systems. Specifically, its purpose was to answer the following question:
Has the switch to private highway maintenance resulted in lower costs for the Alberta government while maintaining the same level of service?

The study utilized information garnered from two additional reports commissioned (but never released) by the Alberta government (KPMG, 2001, and Opus, 2001), as well as Public Accounts (including the “Blue Book” of contracts paid out by government), Auditor General’s reports, and Alberta Transportation surveys and other data. Ultimately, however, the study ran up against two problems that militated against a full and complete answer to its main question. First, constant re-organization made tracking the changes difficult. This finding led to the following recommendations:

The re-organization of government ministries or their reporting and accounting practices should be accompanied by a document clearly outlining the nature of the re-organization and the steps necessary to make pre- and post-reorganizational comparisons.

Second, though Alberta Transportation was very cooperative in sharing information, the department often did not have the information needed or was limited in providing information, by confidentiality issues dealing with private contractors, and therefore not even available through the Freedom of Information and Protection of Privacy Act. This conclusion led to the second recommendation:

In light of these findings, the report concludes that if the privatization of highway maintenance is any example, it appears the government has failed to put in place adequate means for assessing in a publicly accountable manner the success or failure of these experiments.