Citizen's Views on Democracy in Alberta 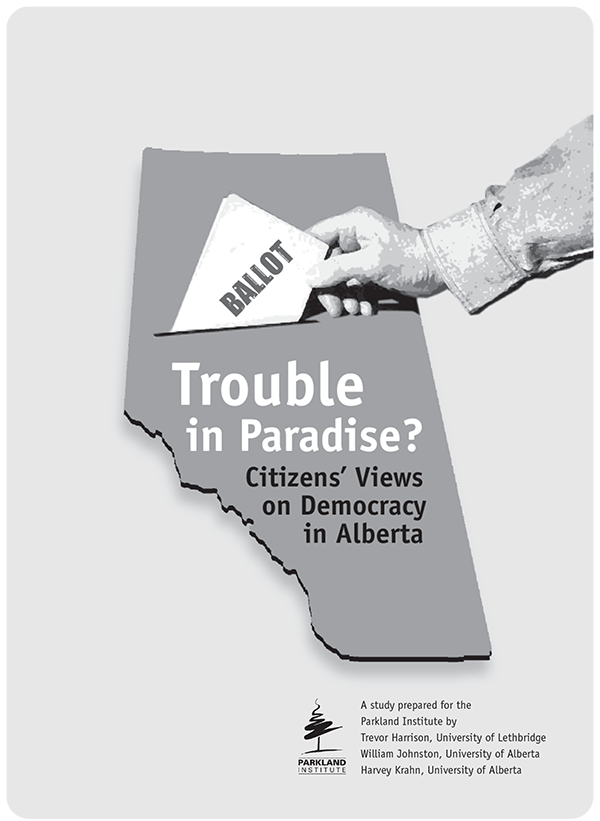 This report examines Albertans’ attitudes regarding the state of democracy in the province. It is based on responses from about 1,200 adult residents of the province to questions about democracy and related political issues that were asked as part of the 2003 Alberta Survey conducted by the Population Research Laboratory (PRL) at the University of Alberta. The findings suggest Albertans are very concerned about the health of democracy in the province, but disagree in fundamental ways with political leaders and much of the mainstream media regarding the causes for concern and means of improving democracy.

Health of democracy in Alberta

The first section highlights responses to a set of five questions asking Albertans’ about their perceptions of the health of the environment, the education system, the economy, the health care system and, finally, democracy in Alberta.

About two-thirds of the sample felt that the provincial economy was “healthy” or “very healthy,” compared to only 40% who felt this way about democracy in Alberta. Somewhat fewer responded this positively about the environment and about the education and health care systems. These differences were small, however.

Additional analyses revealed that Albertans who vote Conservative provincially were more likely than Liberal and New Democrat supporters as well as Non-Partisan Albertans (those who did not state a provincial party preference) to rate each of the economy, democracy, the environment, and the education and health care systems more positively. Even so, only 57% of Conservative supporters believed that democracy in Alberta was “healthy” or “very healthy.”

Influence of groups/institutions on government

The study asked respondents to indicate how much they agreed or disagreed with the following statements about preferred ways of government decision-making: (1) Protest groups are an important part of democracy. (2) Government should be run more like a business. (3) We would all be better off if we left government to the experts.

While six out of ten (59%) Albertans agreed that protest groups are central to democracy, only 50% felt that government should be run more like a business. Only a small minority (16%) agreed that government decision-making by experts, without citizen input, was a good idea.

Preferences for changes to the political process

The study also asked about the types of political reform that Albertans would support. The survey measured the level of support for four different reforms that have been promoted by various political parties and lobby groups in the past decade. Four out of five Albertans favour limits on election spending, while roughly half agree with direct voting on political issues (referenda), proportional representation, and the possibility of recalling elected officials who are seen to be representing poorly the interests of their constituents. There were few differences between Conservative, Liberal and New Democrat supporters in responses to these four proposals for political reform.

Views on the current government

The survey concluded by asking Albertans how much they agreed or disagreed with two statements about the current policies and practices of the Tory government: 1) “The Alberta government hides a lot of information from the people of the province”; and 2) “The provincial government has removed too much power from local (municipal) authorities.” Fifty percent of the sample agreed with the first statement, and almost as many (46%) agreed with the second. While Liberal and New Democrat supporters were more likely to agree, it is noteworthy that about four out of ten Conservative supporters agreed with both statements.

This 2003 survey indicates that many Albertans are concerned with the state of democracy in their province. The results also suggest a major disconnection between the concerns and policies of the main-stream political parties, especially the government, and those of ordinary Albertans. For example, considerably fewer Albertans are concerned about the influence of unions on government than that of big business and the media. Yet such concerns are rarely broached in public discourse, and are certainly not given a high profile hearing in the Legislature. Likewise, government denunciations of protests and other forms of criticism, implying that political decision-making should be left to the economic and political elite, find little support among Albertans, a majority of whom believe that protest groups play an important role in a democracy. In contrast, only a small minority of respondents agreed with the statement that government should be left to experts.

A similar disconnection exists with respect to specific reforms pro-posed as remedies for Alberta’s ailing democracy. Our data show moderate support among Albertans for such measures as direct democracy and the use of recall - changes often proposed by Alberta’s political and media elite - and for the less frequently expressed idea of proportional representation. However, this study shows far greater support among Albertans for limits on election spending, something almost never broached in public debate.

This disconnection seems particularly strong between the public and the governing Conservatives, with just over half of Albertans believing that the provincial government hides information from the public and has removed too much power from local authorities. These results reinforce the core finding of this survey, that Albertans are concerned about the state of democracy in their province.

The practical consequences of this concern are very difficult to assess. One might argue, however, that the results suggest possible problems on the horizon for the current government unless these concerns are heeded.

William Johnston is professor emeritus in the Department of Sociology at the University of Alberta. He earned his PhD (Sociology) at York University.