Time to Act on the True Meaning of Reconciliation

This Canada Day, as we grieve the announcement of the recovery of 215 First Nation children found in a mass grave at the Kamloops Indian Residential School and the 751 unmarked graves at Cowessess First Nation in Saskatchewan, it is time for all of us to reflect on the brutal reality of this country’s colonization and understand the true meaning of reconciliation.

As a new board member of Parkland Institute, I am honoured to be asked to participate with a great team of human beings working to change colonial conversations. Through the board’s Equity, Diversity and Inclusion committee, we are reflecting on Parkland’s history and participation in this big picture and making sure there are Indigenous voices at the leadership level.

But in pondering the importance and meaning of reconciliation for everyone over the past weeks, I am dropped into a grieving space. These mass graves represent extreme acts of violence done to Indigenous people while too many people and governments continue to deny Canada’s role in genocide. Too few questions are asked about why Indigenous people have for the past two centuries had to endure a violent interference in their inherent ways of life on lands they occupied for millennia. If, like me, the thought of mass graves of Indigenous children enrages and anguishes you, it is important to understand that the violence inflicted upon Indigenous people did not happen by accident — it was a carefully calculated plan called colonization.

Colonization through education is at the root of the systemic issues faced by Indigenous peoples. By taking a look at the history of education in Canada, it’s evident the roots of systemic racism run deep. Damaging theories and false narratives have been a weapon of choice to create these perspectives of Indigenous people. Through the exploration of damaging Doctrines of Discoveries used in the Bering Strait and Terra Nullius theories, damaging concepts were adopted by Canada’s post-secondary and educational environments that persist even today. These doctrines uphold barbaric philosophies that guided the extinguishment and massacre of Indigenous communities. These tools of colonization created lethal consequences that disenfranchised Indigenous people, their intellectual properties and lands. Over generations, Canadians have been indoctrinated with dehumanizing depictions of Indigenous people, thus creating unconscious bias.

This has led to long-standing and current chronic overrepresentation of Indigenous children and people in the human service systems. These conditions have facilitated a desensitized and removed perspective of working with Indigenous people and communities that fails to address the crisis of children in care. With decades of research on Indigenous people, we now hold enough information to know better and do better through implementing Indigenous voices and recommendations to our strategies. However, while sifting through the generations of implicit bias, Indigenous people remain at the mercy of non-Indigenous human service providers who unknowingly compound the residual impacts of colonization for Indigenous people through the lack of competencies needed to ethically serve specific populations, as determined by our accreditation bodies that govern our human service industries.

As the nation’s fastest growing population for decades now, Indigenous people must be given space to allocate resources and funds delegated to their communities. Without Indigenous-led strategies, alongside complacency upholding ugly status quo, gross negligence is next on Indigenous advocates’ menus as these industries perpetuate liabilities within our service industries. Complicated intergenerational trauma can only truly be understood and addressed by Indigenous people for Indigenous people. Accreditation and certification bodies are now “indigenizing” their standards and competencies to reflect working with the unique and legally distinct Indigenous population.

To address the systemic issues facing Indigenous communities caused by the colonial systems of education, we all need to reflect on the real meaning of reconciliation. Reconciliation has long been interpreted and delivered through colonial perspectives that reduce reconciliation down to its most basic meaning  found in dictionaries -  “to cause (a person) to accept or be resigned to something not desired”. It is important to remember that The Truth and Reconciliation Commission (TRC) came about when the Government of Canada was forced by a judicial ruling in favour of First Nation residential school survivors.

This “resignation to something not desired” is unfortunately consistent with the history and relationship between Indigenous peoples and Canada. It denies Canadian participation in the genocide of Indigenous people despite the Calls to Action from the National Inquiry of Murdered and Missing Indigenous Women and Girls (MMIWG) and the Truth and Reconciliation Commission. Treating reconciliation as a noun to shelve it like the Royal Commission on Aboriginal People (RCAP) or the Red Paper that rebutted the White Paper by Trudeau’s father himself, Pierre, will not aid in reconciliation.

To heal collectively, we must understand that reconciliation is much more than a simple noun that resigns us to something not desired. Rather, reconciliation is a verb that requires us all to participate in the ongoing process “to bring into agreement or harmony.” Indigenous leaders and communities are now entering into a historical era to shift the paradigm and the devastation, but this process cannot be done alone.

Indigenous rights movements across North America are at a tipping point to address long-standing human and Indigenous rights violations. With plenty of case law supporting Indigenous rights, new federal acts are giving way for the advancement of Indigenous rights and territories through bills such as Bill C92 and Bill C15. Over a year ago, Bill C92, An Act Respecting First Nation, Inuit and Metis Children, Youth and Families, came into effect. Indigenous governing bodies are moving to enact their own child welfare legislation that will impact Canada’s human service industry like no other as Indigenous communities legislate their own laws, courts and systems to build their nations in accordance to their traditions and customs. Bill C15 implements the United Nations Declaration of the Rights of Indigenous Peoples (UNDRIP), where Indigenous people will have full and informed consent on all matters related to their lives and territories.

There is no reconciliation without truth, and currently there is no parallel understanding of what reconciliation means between and by Indigenous and non-Indigenous people. Through localized work to cultivate authentic relationships with Indigenous communities, clarity can be made of these complex legal environments.

Prioritizing education for reconciliation helps citizens, organizations and governments move past tokenized consultation efforts to informed decision-making processes. These inclusive strategies demonstrate the fiscal responsibility necessary in today’s changing economy. So as Canada’s educational institutes contributed to today’s oppression of Indigenous communities and rights, so will education lead us into reconciliation with full Indigenous participation and inclusion and away from the history of racism and colonization.

We must understand that real reconciliation is realized through action and must go beyond talking. The dark legacy of Canadian history reflects the painful need to fully implement the TRC and NIMMIWG in this time of grief and sorrow. These truths are difficult, but listening is the first step to stop the silencing of Indigenous voices. This Canada Day, we must hear the voices of those who were never allowed to speak for themselves. 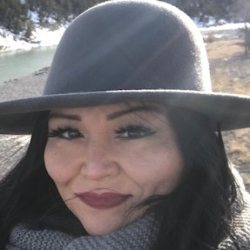