Corporate Profits and Taxes in Alberta 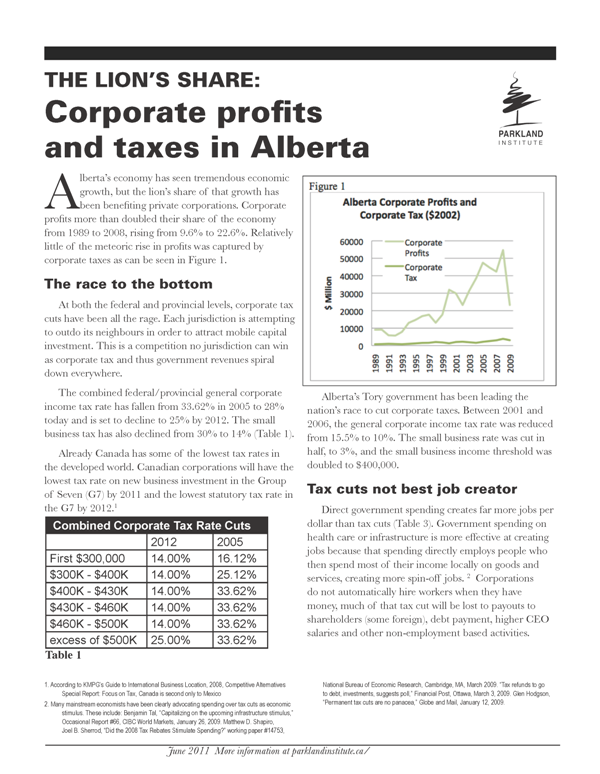 Alberta’s economy has seen tremendous economic growth, but the lion’s share of that growth has been benefiting private corporations. Corporate profits more than doubled their share of the economy from 1989 to 2008, rising from 9.6% to 22.6%. Relatively little of the meteoric rise in profits was captured by corporate taxes as can be seen in Figure 1.

The race to the bottom

At both the federal and provincial levels, corporate tax cuts have been all the rage. Each jurisdiction is attempting to outdo its neighbours in order to attract mobile capital investment. This is a competition no jurisdiction can win as corporate tax and thus government revenues spiral down everywhere. 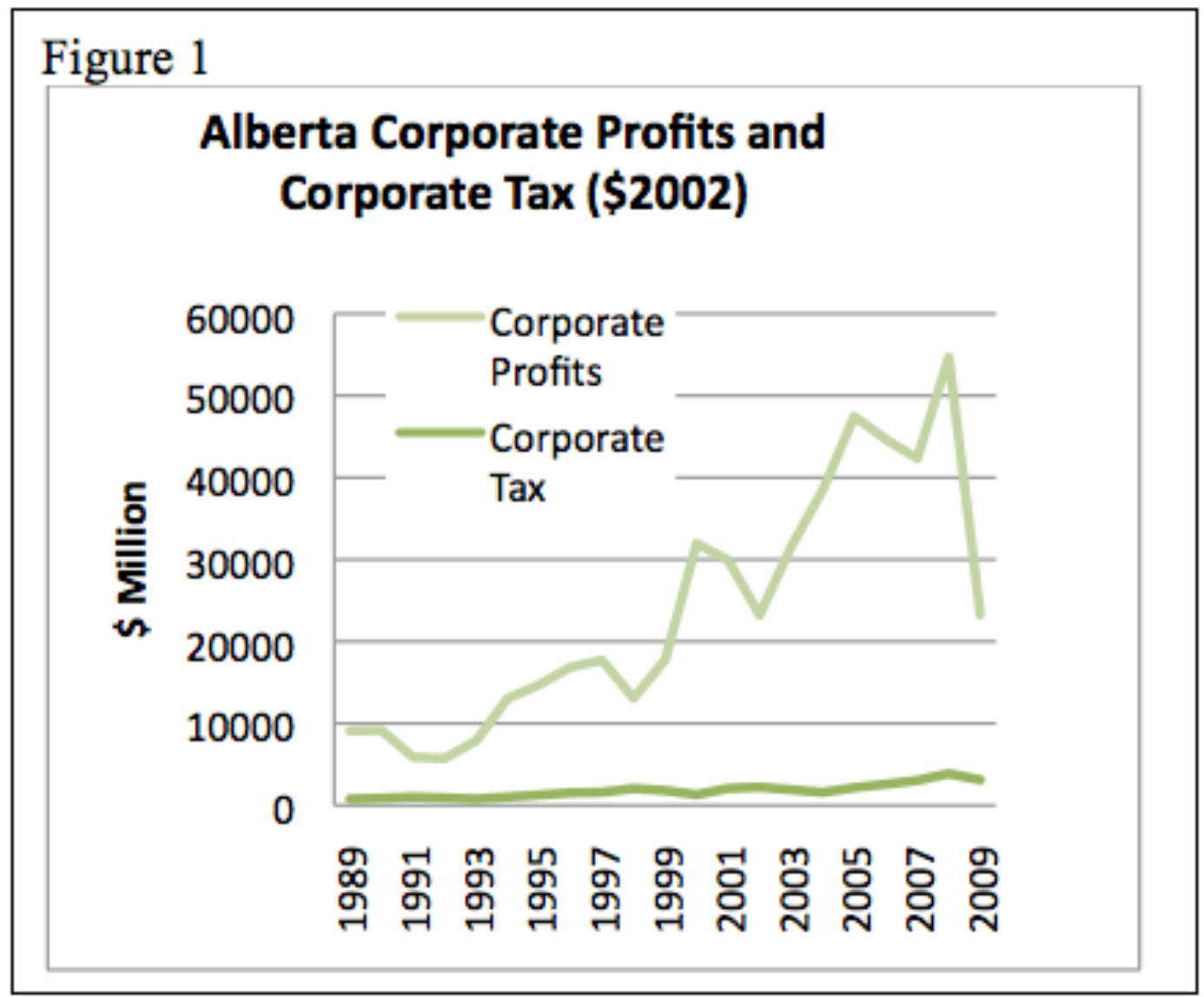 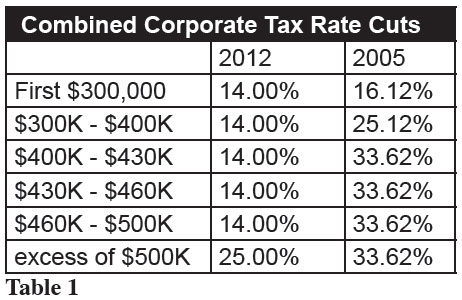 Alberta’s Tory government has been leading the nation’s race to cut corporate taxes. Between 2001 and 2006, the general corporate income tax rate was reduced from 15.5% to 10%. The small business rate was cut in half, to 3%, and the small business income threshold was doubled to $400,000.

Direct government spending creates far more jobs per dollar than tax cuts (Table 3). Government spending on health care or infrastructure is more effective at creating jobs because that spending directly employs people who then spend most of their income locally on goods and services, creating more spin-off jobs.2 Corporations do not automatically hire workers when they have money, much of that tax cut will be lost to payouts to shareholders (some foreign), debt payment, higher CEO salaries and other non-employment based activities. 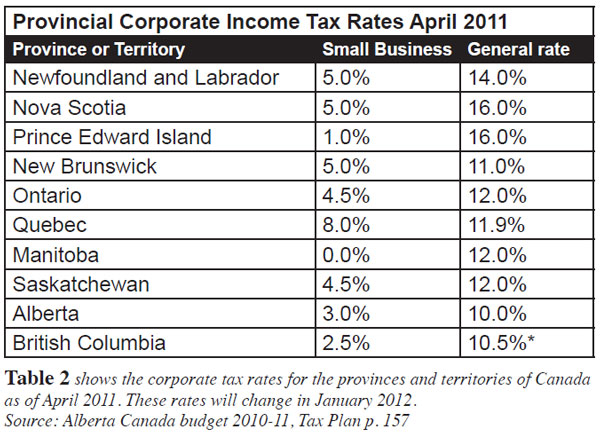 Corporate tax cuts have also not been particularly effective at stimulating investment. As seen in Figure 1 corporate profits have been at record levels year over year with the exception of the temporary dip in the
recession. However, Statistics Canada reports that business fixed capital investment was relatively sluggish during those growth years. Also, TD Bank reported before the recession that the ratio of business investment to profits had fallen to an all time low. If the federal government spent $6 billion on public infrastructure instead of corporate tax cuts, the total increase in investment would be more than ten times
higher.3

Instead of investing, Canada’s corporate sector is sitting on a growing pile of cash. The nonfinancial corporate sector had accumulated $489 billion in ready cash by the third quarter of 2010. 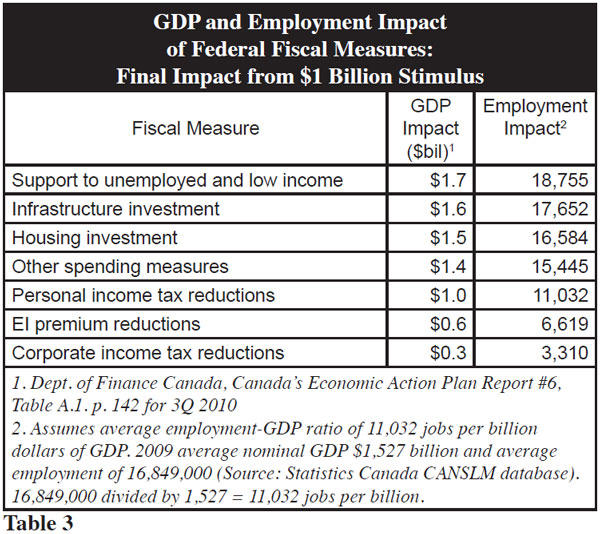 Another reason corporate income tax is particularly important in Alberta is to capture economic rent from the use of natural resources that may have slipped through the Alberta’s inadequate royalties scheme. This is critical in the context of the wealth being generated and not captured from Alberta’s oil and gas industry, much of it by foreign corporations.

The budget for 2010-11 estimated the general corporate tax revenue at $2.822b at the 10% rate. This means that for each percentage of tax the province is collecting $282.2 million.4 Accordingly, if Alberta raised its general rate to 12% it could raise roughly an additional $564.4 million per year in corporate tax revenue.

Though BC’s rate is lower, debate in BC about reinstating it to 12% opens the door for a similar debate in Alberta. This rate would thus be still low enough relative to other provinces that it would not likely be significantly reduced by corporations declaring their revenues elsewhere in Canada, and the US combined tax rates are significantly higher.

Alberta could capture significantly more of the corporate profits if it targeted the extraordinary profits being made in the oil and gas sectors. There is a precedent for a higher corporate tax rate for oil and gas. In 2001 the federal government began cutting the corporate income tax rate but left it at the higher rate for resource companies for an additional two years.5 The United Kingdom has a higher corporate rate for petroleum companies than for other companies.

US corporations pay the difference to the US treasury

The United States does not allow its corporations to avoid taxes by paying them at lower rates in other countries. The US government collects the difference between what those corporations paid in Alberta to the US Treasury rate, meaning that American corporations working in Canada will receive a tax credit for taxes paid (25%) in Canada but will pay rates of 35% at home. Alberta is not attracting American investors with lower taxes, we are just transferring resources to the US Treasury. Estimates are that, depending on the year Alberta has paid between $1.1 and $2 billion in taxes to the US Treasury because they were not collected by the Alberta government.6

In the United States any firm of reasonable size has to provide expensive medical insurance to its employees, Canadian firms do not. Corporate taxes should be levied with this discrepancy in mind. This means that Alberta’s combined corporate tax rate could be higher than the US rate and still give Canada a competitive advantage over US companies.7

The above tables showing tax rates show the statutory tax rates. Studies of effective tax rates show that what companies actually pay in tax is considerably lower because of loopholes they take advantage of. For example, a recent National Bureau of Economic Research paper reported Canada’s corporate tax rate to be 7% for domestic firms and 21% for multinational firms, even though the statutory rate was about 36%.8
The oil and gas extraction sector paid a real tax rate of 6% of profits in 1999 to 18% in 2008.

The incentive created by having a lower small business rate is that larger corporations hive off into smaller units to take advantage of the lower rate. Individuals also incorporate to avoid higher personal income tax rates. Making the rates consistent across corporations regardless of size would create a more effective and fairer regime for progressively capturing both personal and corporate incomes. As long as that rate is paid on profits, small businesses that operate close to the line would not be particularly hard hit by a higher tax rate.

Public opposition to the corporate tax cuts has been significant and consistent. In January, Leger Marketing found only 10% of respondents favoured the cuts, while 40% supported increased corporate tax rates. In early March, both CP-Harris Decima and Ipsos Reid polls found 59% opposed the cuts. In late March, Forum Research reported more than 60% opposed.9 When faced with a choice between social program cuts such as health care and education and tax increases, polling consistently shows the majority support increasing taxes.

It is time to stop the race to the bottom

The corporate tax cuts race to the bottom is a race no one wins. The consequences of this is reduced government revenues -- meaning program and service cuts and deficits. We are seeing this in the provincial
budget which has been in a deficit two years running despite serious cuts to programs including education, housing and community supports. Corporate taxes need to be reinstated and raised to the Canadian
average.