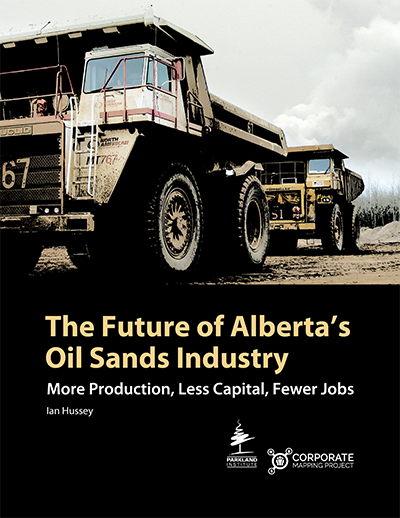 Major restructuring and consolidation of the Alberta-dominated Canadian oil and gas industry has been taking place since 2014 (Hussey et al. 2018), when the lower-for-longer oil price scenario in which the province still finds itself began. This report explores the employment, capital spending, and operational spending implications of the ongoing restructuring and consolidation of the industry. More specifically, the report explains that oil sands industry maturation—which was significantly advanced over the latest commodity cycle—means there has been a recent shift in the industry from its growth phase (2000–2018) to its mature phase (2019 onward).

The five overriding characteristics of the mature phase of the oil sands industry are provided in this section of the report. In short, the rate of oil sands production growth is expected to slow in the mature phase, and capital spending and related employment are not expected to return to the highs of the early 2010s. Adding new technologies and modularization trends into the picture casts further doubt on oil sands employment increasing significantly in the future.

In May 2019, the Alberta Energy Regulator (AER) published its annual Alberta Energy Outlook, predicting that oil sands CapEx will “moderately increase” in 2020 and 2021 but then “decrease from 2022 to 2028.” The AER noted there was only one possible new oil sands mine (Teck’s Frontier mine, which the company withdrew the application for on February 23, 2020) and in situ CapEx is expected to focus on low-cost expansions, not new facilities. So, oil sands CapEx is not expected to bounce back to boom-time levels and is forecast to further decline in the next decade. This is because the massive CapEx of the growth phase of the oil sands industry is over and, as a mature industry, the oil sands are expected to see less CapEx going forward.

An Update on the Big Five Canadian Oil Companies

The Big Five are Suncor Energy, Canadian Natural Resources Limited (CNRL), Imperial Oil, Cenovus Energy, and Husky Energy. In 2018, the five firms maintained their status as the largest Canadian oil companies. Suncor continues to be the largest bitumen producer in Canada, and Suncor continues to be strictly an oil company. CNRL remains the top Canadian gas producer, the top overall oil producer in Canada, and the largest overall Canadian producer of oil and gas. Cenovus is Canada’s fifth largest gas producer, Husky is 12th, and Imperial is 17th.

The Big Five’s total net earnings were largely down in 2018 because Cenovus recorded a significant net loss for the year. Cenovus’ net loss was in part due to a $2.1 billion write-off of exploration expenses in the Deep Basin. Cenovus also reduced its debt from $13 billion in mid-2017 (after the big asset purchase from ConocoPhillips) to $8.4 billion by the end of 2018.

The total net earnings for the Big Five in the first nine months of 2019 was $15 billion, which is more than double the 12-month total for 2018 of $7 billion. The Big Five’s average net profit rate for the first three quarters of 2019 was an impressive 14.2%. All of the companies had healthy profit rates in those nine months, with Cenovus, Suncor, and CNRL earning extraordinary profits of 12.85%, 17.8%, and 26.7%, respectively.

The Big Five transferred $8 billion to their shareholders in the first three quarters of 2019, which almost puts them on pace to match their impressive 2019 total of $11.34 billion.

Most significantly, CNRL bought in situ and heavy crude oil assets from US-based Devon Energy for $3.412 billion in June 2019. Devon Energy’s divestment from Canada is the latest example of an international company divesting from the oil sands, following divestments by France’s Total in 2015, Norway’s Equinor in late 2016, and the Netherland’s Royal Dutch Shell and the US’s ConocoPhillips in the first half of 2017.

Suncor and CNRL had by far the highest CapEx of the Big Five during these 10 years. Cenovus spent the least of the five firms by over $10 billion. In total, the Big Five’s CapEx was a whopping $212.63 billion over the decade.

In aggregate, the Big Five paid $36.79 billion in dividends to their shareholders over the decade, with 35% of this total coming from Suncor. Suncor’s annual dividend total increased every year, including large increases in the 2014–2016 bust period. Suncor’s 2018 dividends were 580% higher than its 2009 dividends. CNRL had the second highest dividend total for the decade; CNRL’s 2018 dividends were 694% higher than their 2009 dividends.

Each of the Big Five has now made public statements about how they perceive and manage their climate risk. Three of the five firms have also begun to publicly disclose their modelling of possible future scenarios and how the effects of climate change and climate policies and regulations may affect their assets and business strategies in the coming two or three decades. The Big Five support governments putting a price on carbon, and all of the Big Five consider current and possible future carbon pricing levels when making business decisions.

Several of the companies stress that even if public policies and regulations in the next two decades keep global warming to 2C above pre-industrial levels (the main target of the Paris Agreement), by 2040 the global demand for oil will be close to 70 million barrels a day (down about 30% from global demand in 2019). The Big Five believe leading Canadian oil producers will play a major role in meeting global demand in 2040. There is no indication from any of the Big Five that they believe that any of their current assets will be stranded during the global transition to a low carbon economy.

Besides the thousands of job terminations connected to the 2014 oil price crash and to industry consolidation since then, and the decrease in construction jobs connected to the more than 50% cut in capital spending, labour productivity gains in the oil sands and in the Canadian conventional oil and gas sectors are being driven by technological innovations and modularization. The ongoing trends in technological innovations and modularization pre-date the 2014 oil price crash, and have accelerated since the crash because the Canadian oil and gas industry shrunk their technical labour force with large-scale layoffs in 2014–2016.

I discuss four technological innovations and how they are reducing the labour requirements of the oil and gas industry, including:

In short, “smarter” capital spending through the development and use of various technological and modularization innovations means less engineering, construction, and operations jobs. Despite the growth in production, fewer and fewer employees are needed. In 2019, overall productivity per employee in Canada’s oil and gas industry was 47% higher than in 2011, and productivity in the oil sands was 72% higher in 2019 than 2011. This indicates that the jobs that have been lost in recent years are likely not coming back. Production is at an all-time high and has increased 23% since 2014, while jobs have declined by 23% since 2014.

Historically, the majority of oil-sands-related construction jobs were jobs to build new production facilities and the connected infrastructure. Not only has the industry moved from its growth phase to its mature phase, meaning fewer new facilities will be built going forward, but also, because of modularization and other technological innovations, the engineering, construction, and operation of new facilities will require less labour.

Oil sands production has never been higher, yet CapEx and employment levels are down significantly compared to 2014. Labour productivity has increased in recent years because of advancements in technology and modularization. The current low employment levels relative to the highs of the early 2010s are expected to continue, and could worsen in the 2020s due to a combination of CapEx levels remaining well below the peak levels seen in 2014 and additional technological innovations which are likely to further increase labour productivity.

Even with additional takeaway capacity coming online in the next couple years (additions to Enbridge’s Mainline and to crude-by-rail and the completion of the Line 3 expansion), the other factors examined in this report indicate that the majority of the 53,000 jobs terminated from 2014 to 2019 are not likely to return to the Canadian oil and gas industry. It is entirely possible that industry employment and CapEx will never again reach the heights seen in 2014.

The five leading Canadian oil companies continue to make healthy rates of profit and to transfer sizeable dividends to their shareholders. The Big Five routinely test their business decisions against various possible future scenarios and how the effects of climate change and climate policies and regulations may affect their assets and business strategies in the coming decades.

The governments of Alberta and of Canada must now decide on a course of action to manage our country’s transition to a net-zero-emissions economy by 2050. Plans that take the global climate crisis seriously will necessarily involve the managed decline of oil and gas production in the next three decades.