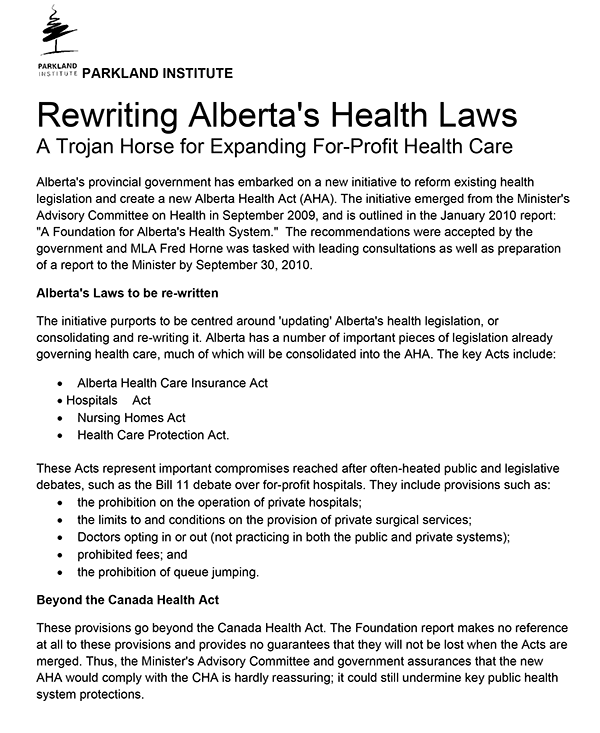 Alberta's provincial government has embarked on a new initiative to reform existing health legislation and create a new Alberta Health Act (AHA). The initiative emerged from the Minister's Advisory Committee on Health in September 2009, and is outlined in the January 2010 report: "A Foundation for Alberta's Health System." The recommendations were accepted by the government and MLA Fred Horne was tasked with leading consultations as well as preparation of a report to the Minister by September 30, 2010.

Alberta's Laws to be re-written

The initiative purports to be centred around 'updating' Alberta's health legislation, or consolidating and re-writing it. Alberta has a number of important pieces of legislation already governing health care, much of which will be consolidated into the AHA. The key Acts include:

These Acts represent important compromises reached after often-heated public and legislative debates, such as the Bill 11 debate over for-profit hospitals. They include provisions such as:

Beyond the Canada Health Act

These provisions go beyond the Canada Health Act. The Foundation report makes no reference at all to these provisions and provides no guarantees that they will not be lost when the Acts are merged. Thus, the Minister's Advisory Committee and government assurances that the new AHA would comply with the CHA is hardly reassuring; it could still undermine key public health system protections.

Will these protections be lost?

Though the AHA has not yet been released, Albertans can get an idea of what will or will not be in it. In reviewing the AHA initiative, Albertans have three things to go on for indication of the direction the reforms will take.

On the basis of the wording in the AHA, the agenda of key pressure groups and the history of the Alberta government on health reform, there are pretty strong indications that the Alberta Health Act will be used to expand and entrench the role of for-profit delivery in health care. The initiative is a fundamental restructuring of the health care system and could set dangerous precedents across Canada.