The Alberta government recently took a step toward privatizing the operation of its land titles, corporate, and personal property registries. Why the government would want to sell a key revenue-generating public asset remains a mystery, unless one acts primarily and/or exclusively on ideological impulses.

The Alberta Union of Provincial Employees representing the 130 government employees working for the registries has already expressed its strong opposition to the move, which they also fought back when the PCs attempted privatization in 2013. What happens when a government privatizes its land registry? Who benefits? What are the repercussions for the ordinary citizen? Let’s look to the three provinces that have already privatized their land registries for some answers.

Only three provinces have fully privatized the operation of their land registries. Manitoba and Ontario pursued privatization through partnerships with the Ontario-based transnational corporation, Teranet. The company began in 1990 as a public-private partnership created by the Ontario government. Since 2008, Teranet has been wholly owned by the Ontario Municipal Employees Retirement System (OMERS). In 2014, Teranet entered a full-concession exclusive licence to operate the land registry in Manitoba. Saskatchewan’s land registry is operated by the Information Services Corporation (ISC) that began as a Crown corporation, but transitioned to a publicly traded corporation in 2012. British Columbia has adopted somewhat of a hybrid, semi-privatized model whereby the land title and survey authority operates as a statutory corporation.

The experience so far with privatization is that it leads to higher service fees. Table 1 shows that following privatization, fees for obtaining a copy of a single land title increased, most notably in Manitoba and Ontario where Teranet operates as the service provider. The Alberta Lobbyist Registry reveals that Teranet has pressured the Alberta government over the past year to privatize their registries (Bellefontaine, 2021).

These fees are significantly higher than in any other Canadian jurisdiction. While governments retain the authority to determine service fees, the large fee increases in Manitoba and Ontario following privatization suggest the priorities of a corporate service provider holds significant sway. Observers have criticized the higher land registry fees, stating they are not reflective of the cost of services (Funk, 2020).

While individual land titles are most often accessed by lawyers, government offices, real estate agents, surveyors, financial institutions and individuals, the data is absolutely critical for public research. Alberta has 50 million acres of farmland (Government of Alberta, 2018), so examining the changing patterns of tenure across these acres highlights why we should all care about the accessibility of land titles data.

Farmland concentration has been occurring for decades, but it has now reached a state of dramatic proportions. From 1976-2016, Alberta lost 34 per cent of its farms, and fewer and fewer people now control more and more of the land base. In 2016, 40 per cent of farmland in Alberta was controlled (owned and operated) by just six per cent of farms, each at more than 5,000 acres (Qualman et al., 2020).

Another key trend has emerged: investors and investment firms have heightened interest in farmland as an asset class. Quantitative research on investor farmland buy-ups in Saskatchewan, conducted using the land titles data, revealed a 16-fold increase in the number of acres owned by investors between 2002 and 2014 (Desmarais et al., 2017). While investors purchased approximately 10 per cent of all land sold at arm’s length (that is, land placed on the market and sold to different entities and not within the family) throughout the province in 2012, this figure was more than 30 per cent in the 16 rural municipalities where investors were most active (Magnan & Desmarais, 2017). Concerns around investor ownership of farmland eventually led to changes in Saskatchewan’s land legislation that restricted the purchase of farmland by some institutional investors such as pension plans, but private investors can continue to do so.

There is a notable lack of attention by the Alberta government to track and assess the impacts and implications of farmland concentration and investor ownership, or in fostering public dialogue on the issue (Aske, 2020). However, recent survey and interview data from farmers across Alberta reveals deep concern that large landholders are outcompeting smaller farmers, that there is less land for sale and/or for rent, and that new/young farmers are unable to enter the sector (Aske, 2020). Without public and affordable bulk access to land titles data, it’s impossible to determine the extent of farmland concentration and investor ownership in Alberta. This kind of information is crucial to inform the development of strong land legislation.

Land titles data, if made truly accessible, can give power to everyday people to confront the shifts taking place around them and allow for a politicization of the changing land tenure patterns that are often left to pass as inevitable (Aske, 2020). Currently, increasing amounts of this collective good that is land – our life-sustaining territories, landscapes, resources and places – is being enclosed by the wealthy, and the state is enabling this process. The privatization of the land titles registry further impedes resistance to this trend.

The land titles, corporate, and private property registries generate significant public revenue each year. According to Bellefontaine (2021), this public service brought in $123.6 million in 2019-2020. Selling the operation of the registries is not in the public interest, though it is emblematic of the Kenney government’s undermining of the public sector. Even within an austerity regime rolled out under the guise of reducing the deficit, it is hard to justify a move to privatize such a successful revenue-generating provincial asset. And, revenue aside, it is critical that the management of vital and pertinent public data remain a government responsibility rather than being commodified and sold for private gain. The operation of these registries must remain a public service, with accessibility to public-interest researchers and ordinary citizens a key priority.

Authors:
Laura Funk has an MA in Sociology. In addition to studying the politics of managing land registries in the Canadian prairies, she conducts research on urban food policy and food security.
Katherine Aske is a budding small-scale farmer with an MA in Geography. Her research looked at changing farmland tenure patterns in Alberta.
Annette Desmarais is Canada Research Chair in Human Rights, Social Justice and Food Sovereignty at the University of Manitoba. 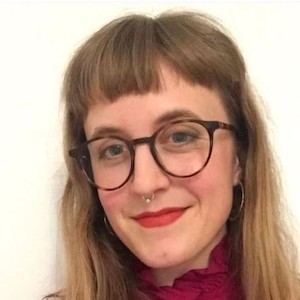 Katherine Aske is a settler and farmworker who grew up in Mi'kma'ki. She joined Dr. Annette Desmarais' project analyzing changing farmland tenure on the prairies after witnessing investor interest in farmland while working for the National Farmers Union in New Brunswick. After farming in Alaska and at the Tsawwassen First Nation Farm School, she now works at the UBC Farm on the unceded territory of the Musqueam as their Practicum Field Coordinator. She is also the chair of the National Farmers Union's Farmland Committee.