More Than "Just a Health-Care Aide"

Long-term care (LTC) facilities have emerged as the single most critical setting for the outbreak of the COVID-19 pandemic across Canada. In the first two waves of the pandemic, LTC institutions accounted for nearly three-quarters of COVID-19 deaths in Alberta, with facilities in Calgary disproportionately affected. Issues such as chronic understaffing, an insufficient supply of personal protective equipment, and high levels of stress on patient families have justifiably received extensive media coverage. However, far less attention has been paid to the health-care aides (HCAs) within these institutions, whose work is socially and economically devalued and can be considered 3D work: dirty, difficult, and, particularly during times of pandemic, highly dangerous.

Within Calgary’s LTC workforce, immigrant and racialized women, in particular, are overrepresented. These workers are especially vulnerable due to the front-line nature of their employment, as well as their gender, citizenship status, race and/or class. Across Canada, at least 27 HCAs have died of COVID-19, the majority of whom were black. This report summarizes the findings of interviews with 25 immigrant women HCAs working in LTC in Calgary that were conducted virtually between Jan. 1, 2021 and March 30, 2021, by professor Naomi Lightman (University of Calgary) in collaboration with the Calgary Immigrant Women’s Association. The interviews aimed to address existing information gaps regarding the implications of the COVID-19 pandemic on the livelihoods and broader health and well-being of immigrant women who work in LTC in Calgary and to uncover the strategies immigrant women working in LTC identify as a means to improving their safety and employment conditions and the quality of resident care they provide.

Four key areas of concern were highlighted by the immigrant women HCAs (with inevitable overlap between them):

The harsh financial costs of the pandemic
In explaining the severe financial challenges they are currently experiencing, the immigrant women HCAs uniformly pointed to the single-site work policy instituted by the Alberta provincial government in April 2020 as a protective measure to limit cross-contamination of the virus across multiple LTC locations. While the women did not question the wisdom of this policy, the majority of them had been working at more than one job site as an HCA prior to the pandemic in order to pay their bills. Many were currently making 40-70 per cent as much income as they had previously. The women noted current government measures (e.g. the Critical Worker Benefit and $2/hour wage top-up in private continuing care facilities) are inadequate to make up this difference in pay, and they voiced concerns that the rhetoric surrounding gratitude toward essential workers is empty without concrete changes to their wages. In addition, they detailed difficulties in navigating the government and employer benefits available when they had to take time off
work due to testing COVID-positive or having to isolate due to (potential) COVID-19 exposure.

Exacerbated Physical & Mental Health Challenges in HCA Work
The interview participants stressed that the physical and mental health demands of being an HCA in LTC in Calgary increased during the pandemic due to a variety of factors. They detailed their increased demands on the job due to additional COVID-19 protective measures (e.g. repeatedly donning and doffing PPE); their heightened levels of stress tied to fears of becoming personally infected with COVID-19 and/or their fears of infecting family members and particularly their children; and their overwhelming and ongoing feelings of loss and helplessness as a result of watching LTC residents die of COVID-19 in large numbers. At the same time, the women noted they were, in some cases, also dealing with anger, blame and racism from LTC residents, some of whom lashed out with accusations that HCAs had “brought the virus” into the LTC site, or who treat HCAs “like servants.”

Institutional (Mis)Management in LTC
The immigrant women HCAs repeatedly critiqued what they perceived as the prioritization of profits over quality of care by LTC management. In particular, those women working in private and non-unionized LTC
institutions in Calgary were overall most dissatisfied. The HCAs detailed how institutional mismanagement resulted in a lack of PPE during the first wave of outbreaks and in the consistently inadequate staffing ratios. They also noted a continued reluctance to provide full-time permanent employment to HCAs, which only exacerbated staffing deficits and increased worker precarity. They critiqued the growing reliance on casual HCAs or staff from temp agencies, often without proper training or co-ordination, as their employers’ preferred strategy to fill any staffing gaps. Finally, the women spoke about the movement of workers across floors/units within LTC institutions without regard to limiting cross-contamination as a management decision which contributed to poor COVID-19 outcomes for both workers and residents.

A Need to Centre the Voices of HCAs in Government Decision-Making in LTC
The immigrant women HCAs interviewed identified a need for an increased role for all levels of government in both regulating and investing in public forms of LTC going forward and stressed the need for a greater voice for HCAs in all aspects of LTC decision-making. This, in concrete terms, meant a need to invest in both physical and human infrastructure in LTC workplaces, to ensure accessibility for residents and so that HCAs have the supports that they need at work, including unions, childcare and health benefits. In addition, the women noted: the importance of regular and random inspections of LTC facilities by Alberta Health Services, done on a surprise basis without prior notification to management; a need to amplify, rather than dismiss, the voices of immigrant, racialized women who are HCAs; and, finally, the need for increased recognition of the essential jobs that lower wage healthcare workers, such as HCAs, are providing during the pandemic, to move beyond suggestions that they are “just HCAs.”

Recommendations
Increase compensation and protections for HCAs in LTC
1. Raise hourly wages for all HCAs and ensure privately operated LTC institutions do not pay less than public institutions
2. Implement guaranteed paid sick days for all HCAs in LTC
3. Legislate higher staff-to-resident ratios within LTC
4. Promote unionization for HCAs in all LTC settings
5. Reduce or eliminate the use of casual employees and temp agencies to staff HCAs in LTC
6. Increase supplementary health and mental health benefits and supports for HCAs and their families

Improve oversight, transparency, and equity within Alberta’s LTC sector
7. Reverse current trends toward investing further in private for-profit LTC
8. Increase unannounced government inspections of LTC and implement more severe operator repercussions when standards are not followed
9. Ensure that all HCAs in LTC are prioritized for PPE, vaccination and any
and all other protections against current and future pandemic outbreaks
10. Provide adequate social supports for safe and secure working conditions for HCAs in LTC
11. Increase diversity in leadership positions within LTC, and implement mandatory Equity, Diversity and Inclusion (EDI) training for all levels of LTC management
12. Ensure the voices of HCAs are included in all decision-making processes within LTC going forward

Marie-Solange Evehe B. has a PhD in biochemistry from Cameroon where she was involved in research on drug resistance in malaria for over 18 years. She is currently co-ordinator of the Retail Training Program at the Calgary Immigrant Women’s Association.

Courtney Baay is an MA student in sociology at the University of Calgary. Her areas of research interest are care work, gender, migration and health. Baay’s thesis research was recently published in Policy Options. 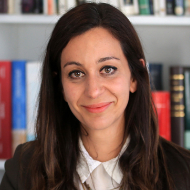 Naomi Lightman is assistant professor of sociology at the University of Calgary. Her research centres on care work, migration, gender and inequality and has been published widely in academic journals. Dr. Lightman also actively collaborates on research with various social agencies such as the Parkland Institute, the Calgary Immigrant Women’s Association, the Calgary Local Immigration Partnership, Social Planning Toronto and the Wellesley Institute.