A Study of Ownership, Accountability, and the Public Interest 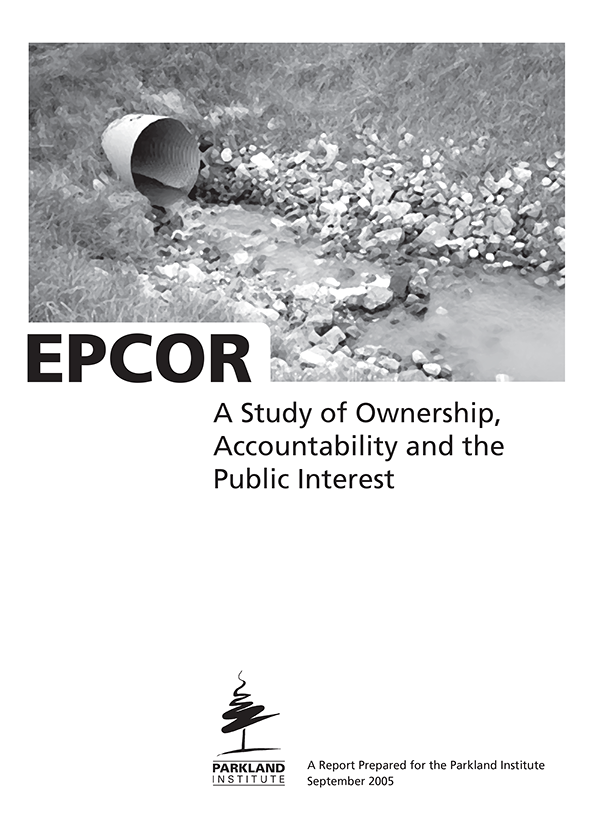 EPCOR is a unique organization, one with many contradictions. It was founded from Edmonton’s power and water utilities, yet operates in other provinces and in the US. It is owned by the City of Edmonton, yet is not answerable to the public, and takes no operational direction from the City. The City has rejected privatization of EPCOR, and yet privatization attempts continue and EPCOR has issued shares that trade on the Toronto Stock Exchange. These contradictions raise the issue of EPCOR’s accountability. And at a time when the City of Edmonton is considering handing over its drainage system to EPCOR, consideration of accountability is urgent.

Modern, large business corporations, in stark contrast, have one accountability - to maximize profits for shareholders. And despite the fervent wishes of the Corporate Social Responsibility movement, business corporations are legally unable to sacrifice profits to servesome other social or environmental goal. Proponents of the corporatization and privatization of publicly-operated enterprises often seek to justify their claims by asserting that regulation will be adequate to protect the public interest. However, in reality, regulationas a means of protecting the public interest suffers from a number of shortcomings in comparison with direct public operation of anenterprise. Regulation is often ill-informed due to information asymmetry, and it is inefficient. It is a blunt instrument that tends tocause collateral damage and thus is used rarely. It is often ineffective at stopping the proscribed activity, and at achieving the ultimate policy goal.

However, other business forms, such as sole proprietorships, partnerships and corporations managed by their owners, can serve public-interest goals other than profit maximization. And private sector, public interest enterprises, such as cooperatives and non-profitsocial enterprises, can be set up in a way that requires them to do so. Such public interest enterprises can be quite large and successful, andthey currently operate in many sectors, including utility management.

EPCOR operates at the corporate end of the accountability spectrum;its primary accountability concern is in relation to shareholders and growth. On EPCOR’s board there is a lack of participation and oversight by City Council and other stakeholders. The utilities EPCOR controls are no longer the subject of democratic decision-making, and there is no requirement for public transparency. The City can not set the operational priorities and decisions of EPCOR utilities to further City priorities like environmental protection or wisely managed, cost-efficient development. Finally, direct accountability to the public has been curtailed, as the corporatized utilities are no longer subject to the Freedom of Information and Protection of Privacy Act. Key documents governing EPCOR's accountability relationship with the City are unavailable to the public.

The above concerns respecting EPCOR’s low level of accountability and its focus on profit maximization at the expense of other public priorities are also applicable to the proposal to transfer the City's drainage services to EPCOR. Corporatization of drainage wouldgreatly reduce accountability, and the ability of the City to control development.

The utilities and the citizens of Edmonton are at an important crossroads. Corporatization of utilities is often used as a stepping stone to full privatization, and EPCOR is at risk of privatization. Privatization of EPCOR would mean the complete and final loss of the public’s control over the utilities. Utility rates (and Director andmanagement salaries) would no doubt increase, while profits and corporate control move abroad. Profit maximization would override the public interest in orderly city development, protection of the environment, and liveable wages to support families and communities. And if the City’s drainage service is handed over to EPCOR, the probability of privatization would increase substantially, along with the associated harms.

However, while the City continues to be the common shareholder of EPCOR, it is still in a position to preserve, and increase, the accountability and the public interest served by our utilities. Insteadof proceeding down the path of corporatizating drainage, the city could keep it on as a city function, and could seek to achieve any ofthe goals it identifies for drainage services within its current structure.

Furthermore, the City could take any number of steps to increase theaccountability of EPCOR’s utilities, for instance:

These and other options for increasing, rather than decreasing, the accountability of our utilities, are deserving of further study. It is vital that the City do so, while it still can.