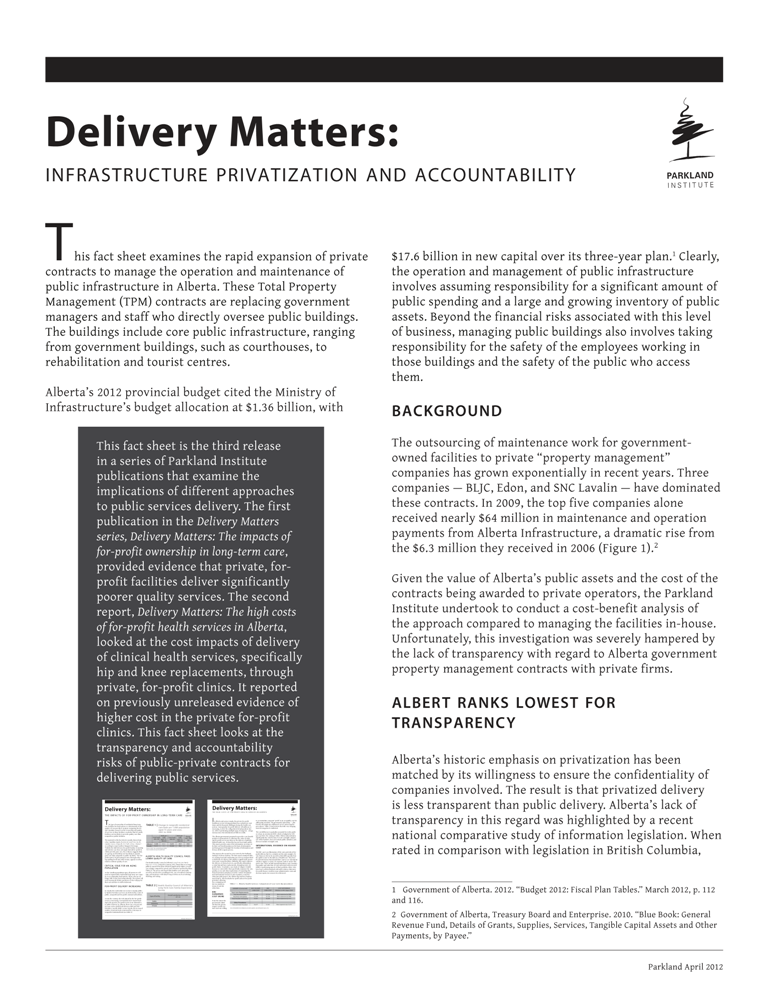 The outsourcing of maintenance work for government owned facilities to private “property management” companies has grown exponentially in recent years. Three companies — BLJC, Edon, and SNC Lavalin — have dominated these contracts. In 2009, the top five companies alone received nearly $64 million in maintenance and operation payments from Alberta Infrastructure, a dramatic rise from the $6.3 million they received in 2006.

Given the value of Alberta’s public assets and the cost of the contracts being awarded to private operators, the Parkland Institute undertook to conduct a cost-benefit analysis of the approach compared to managing the facilities in-house. Unfortunately, this investigation was severely hampered by the lack of transparency with regard to Alberta government property management contracts with private firms.

This report illustrates that in the matter of public infrastructure, delivery matters; it matters who is managing and maintaining our public buildings and infrastructure. Using private contractors reduces transparency and accountability and the evidence regarding the cost implications is unclear for Albertans. Given the amount of public spending and the volume of assets in question, these are important concerns. To rely on private delivery of infrastructure maintenance, is to risk the mismanagement of infrastructure funds and capital assets.

Parkland’s Delivery Matters series has shown overall that using private for-profit companies to deliver public services not only reduces transparency and accountability, but is associated with higher costs and lower quality services. Given the lack of proper cost-benefit analyses of those public-private infrastructure contracts, a moratorium should be placed on further expansion until such a costbenefit analysis has been made public, with full details of true costs of these contracts to Albertans.