Alberta's financial situation is a challenge, not a crisis

With Alberta’s budget only a couple of months off, politicians, think tanks, and the media will soon be weighing in on the state of the province’s finances. Given past practice, many right-wing groups will likely argue that Alberta’s finances are in extremely poor shape; while acknowledging the drop in oil prices and its impact on the province, they will contend that Alberta has a spending problem.

How bad are Alberta’s finances? And is the problem one of high expenditures or low revenues?

Given the post-fact world we increasingly seem to be in, it is important to get as accurate and evidenced-based information as possible. One particularly good source is RBC Financial. The website provides provincial comparisons on a host of financial information across several years. Its most recent data, released in December 2016, has relevant data on four measures bearing on the question of the state of Alberta's finances relative to other provinces: provincial expenditures, provincial revenues, net debt to GDP, and net debt per capita. Data for 2015-16 is actual, while data for 2016-17 is projected.

Past Parkland Institute reports have shown that Alberta’s expenditures per capita tend to be middle-of-the-road relative to other provinces. But — and despite the downturn — Alberta remains a very wealthy province. Under these circumstances, one might expect Alberta to be far above average in spending relative to the size of its economy. Figure 1 shows that this is not the case. 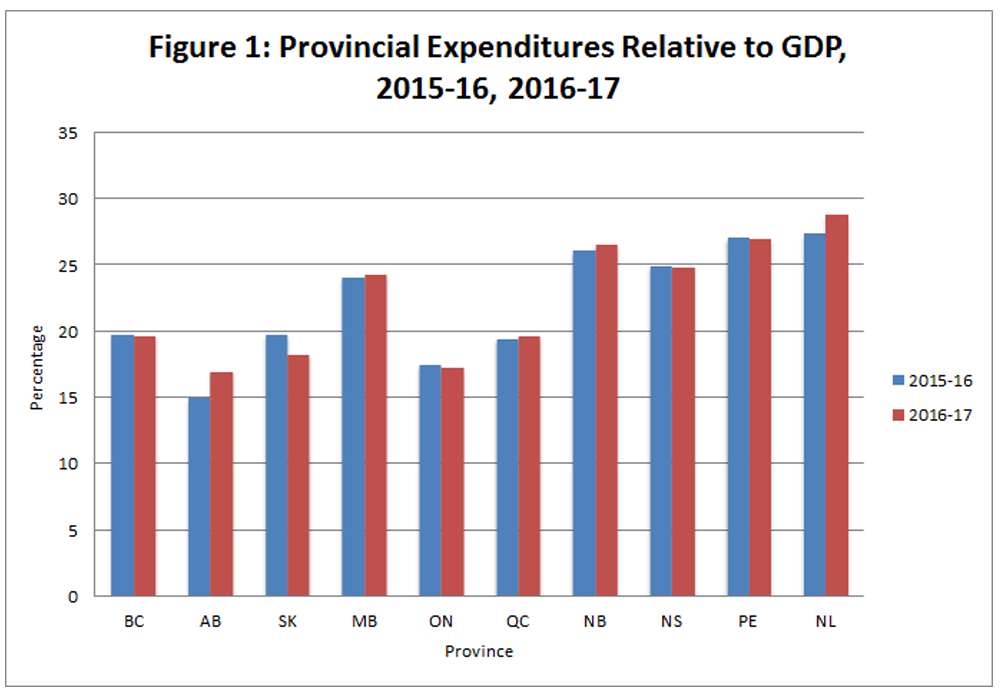 Alberta in 2015-16 spent 15% of its GDP, far lower than any other province, including the three other conservative-lead Western provinces. RBC’s projections for 2016-17 show only a modest bump in spending — to 17% of its GDP — that will still leave Alberta's relative level of spending behind other jurisdictions.

If Alberta is not a spendthrift, what is its record as a revenue collector? Figure 2 shows that, as with expenditures, Alberta trails all other provinces in collecting revenues, and is projected by RBC to continue to do so again this fiscal year. 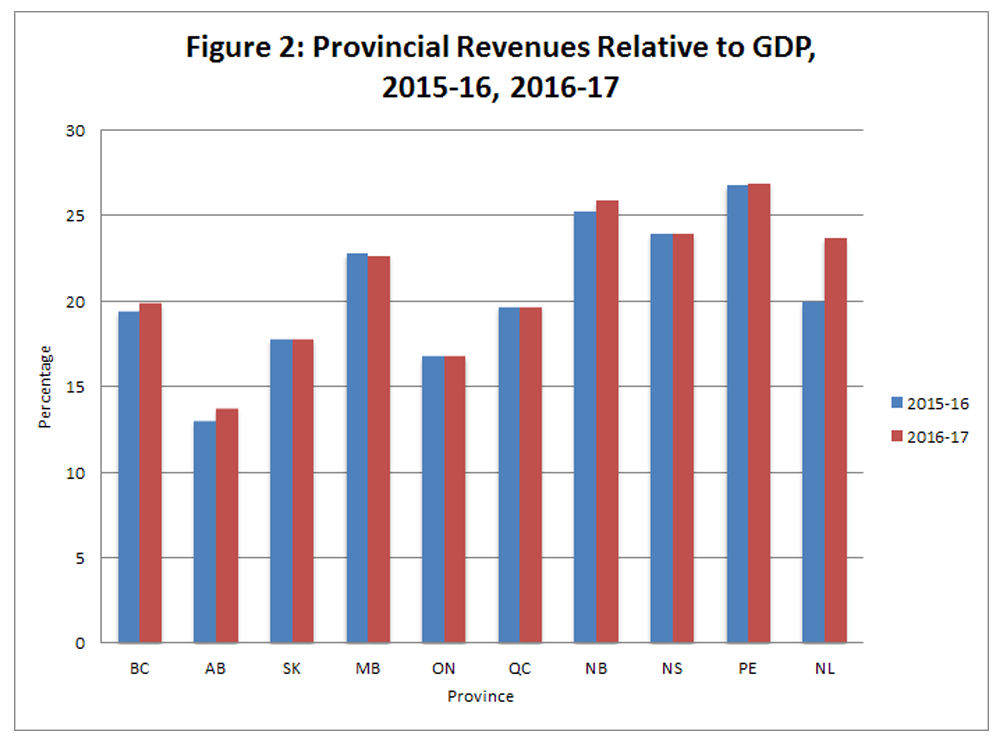 Despite these facts, some critics argue that Alberta is facing a deficit and debt crisis brought on by slumping oil prices and the NDP government’s refusal to make substantial cuts to the public sector while also modestly raising personal and business taxes and, as of January 1, implementing a carbon tax. Is Alberta facing a fiscal crisis? Again, the RBC data would suggest otherwise.

The drop in the oil price significantly impacted Alberta’s revenues during the last two years. People can argue the best way to deal with the problem of suddenly evaporated revenues. The NDP government chose a fairly standard practice of maintaining spending during the downturn so that the province would not go into an even more serious recession. This decision came at a cost of borrowing money to pay for much-needed infrastructure while also keeping many Albertans employed. Fortunately, the province was able to borrow at good rates because of its glowing debt situation and long-term economic prospects. Indeed, as shown in Figure 3, Alberta’s debt situation remains the envy of any other province in Canada.

The provincial debt in per capita terms, shown in Figure 4, reflects the same broadly positive situation of Alberta’s finances as a whole.

As Figure 4 shows, Albertans’ per capita debt relative to any other province remains very low – roughly $5,600 less per person than their counterparts in British Columbia or Saskatchewan (the next lowest) and light years below that of Canada’s eastern provinces, including Ontario and Quebec.

What does all this mean? First, it is important to recognize that Alberta does face economic challenges that are impacting the province’s finances. Second, while Alberta has been through downturns in the past, the current situation may be materially different, requiring that the province take some bold and potentially controversial measures to position us for the future.

But Alberta faces challenges, not a crisis. We could and should spend more on important social and economic initiatives. We could and should enlarge our revenue streams, in part to pay for current programs, but also to begin the process of weaning ourselves off of oil royalties. We can, if we choose, continue to borrow to get us through the lean times. But, again, Alberta is not in a crisis — and don’t let anyone tell you that.