Alberta's 'blue-ribbon panel' - the sound of one hand clapping

The announcement by the newly elected UCP government of a "Blue Ribbon Panel" to examine Alberta’s finances was totally expected. Likewise, the panel’s mandate to focus on expenditures and not revenues (or both) comes as no surprise. The panel’s chair, Janice MacKinnon, a former Saskatchewan NDP finance minister (1993–97), has said that, in tackling that province’s finances at the time, she "laid the facts before the people." One may hope, if vainly, that such will be the case in Alberta.

By design, the panel’s mandate has already tied one hand—the revenue hand—behind its back, leaving only the expenditure hand with which to deal with what Premier Kenney has said is Alberta’s "deep fiscal hole." But the depth of this hole is unclear. An analysis of Alberta’s finances conducted by economist Mel McMillan and presented at last fall's Parkland Institute conference suggests the province’s economic situation is not dire. While he points to some warning signs—notably that oil sands investment, upon which the province has too heavily relied, is declining—McMillan contends that Alberta’s economy will continue to experience moderate but slower growth in future.

Contra the driving theme of the government’s panel, McMillan contends that Alberta has "mostly a revenue problem." 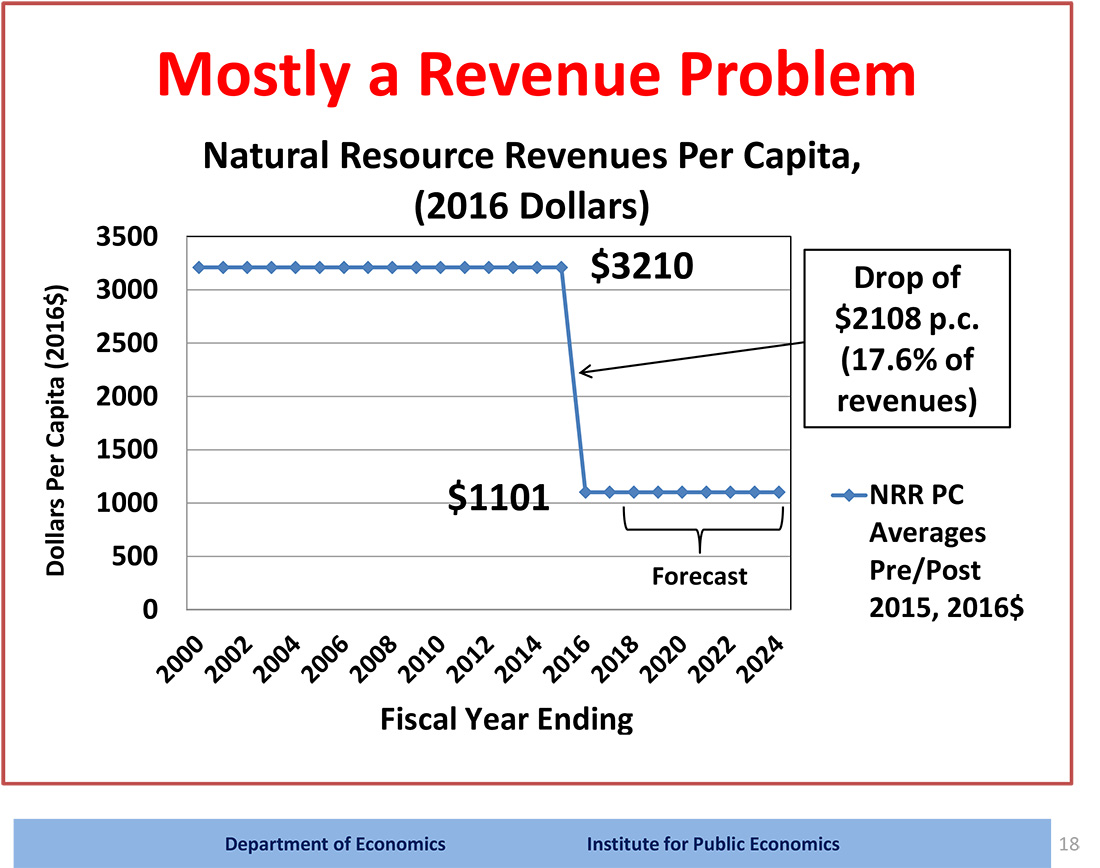 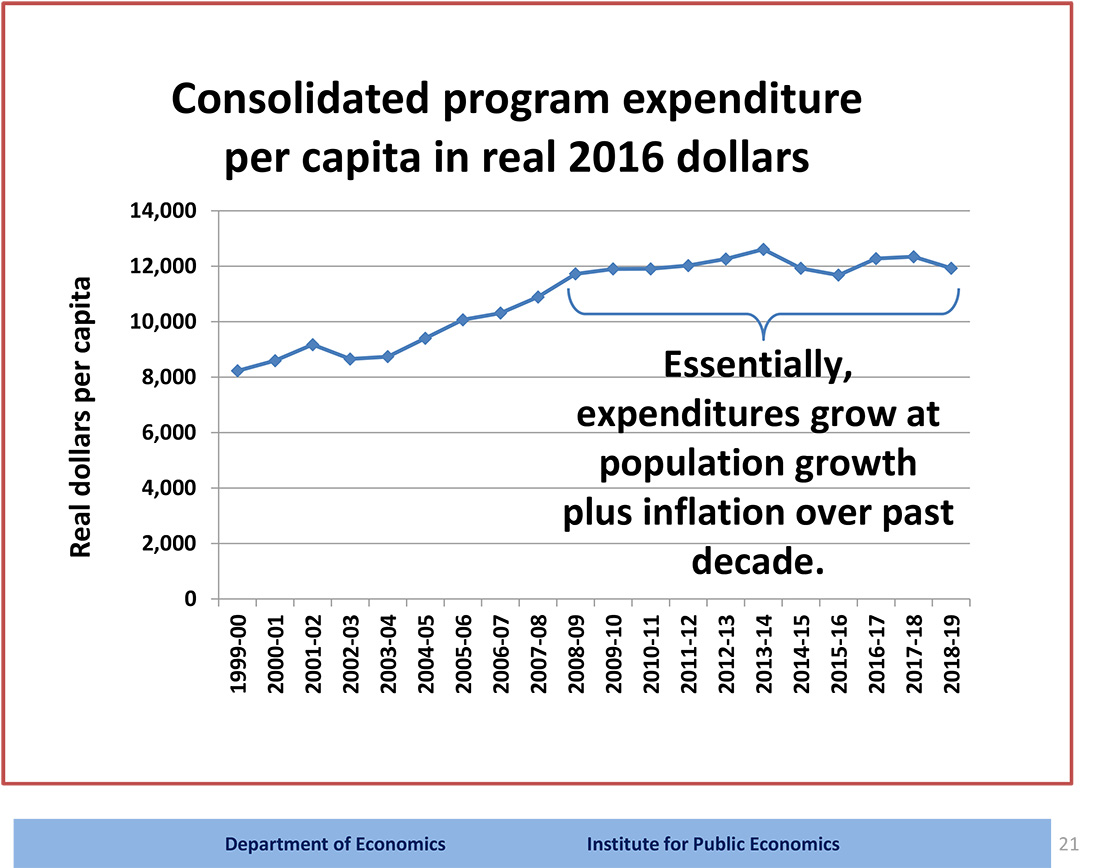 In fact, program expenditures as a percentage of household income* have not risen since 2000, and are low relative to other provinces. 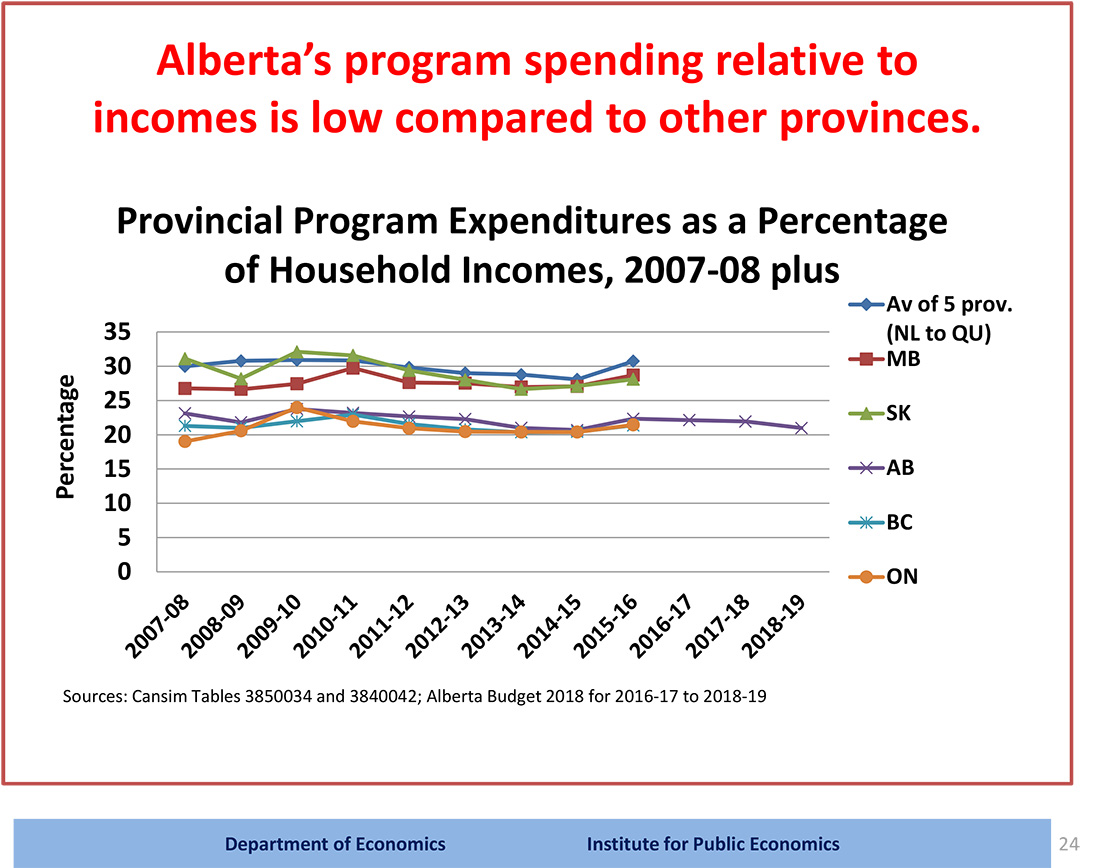 Despite MacKinnon’s claim, both at the government press conference announcing the formation of the panel and in a subsequent Edmonton Journal op-ed, that, "Relative to the rest of Canada this [Alberta] is a big spending province in virtually every area," McMillan shows that since 2000 Alberta’s per capita expenditures have essentially been equal to the average spending levels of the 10 provinces. 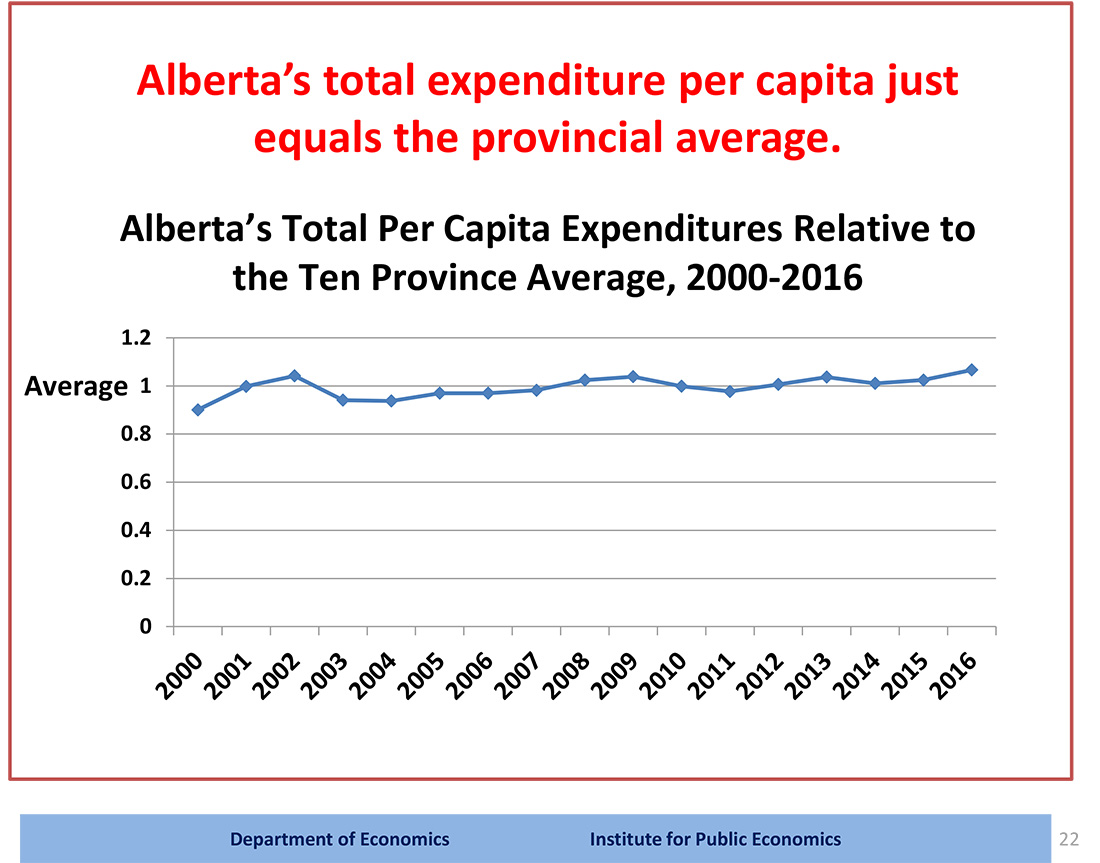 The most recent figures from the Royal Bank of Canada bear out McMillan’s analysis. RBC data show that for 2018–19 Alberta has the lowest net debt-to-GDP ratio in Canada at 8%, versus British Columbia, the next highest, at 14.8%. Alberta’s expenditures relative to the other provinces are not "eye-popping" as stated by MacKinnon in her first comments after the panel was announced. Measured as a percentage of GDP—which reflects spending relative to the size of the economy—the RBC data shows that Alberta’s expenditures are in fact the lowest in Canada, 16.1% for 2018–19 versus Saskatchewan, the next highest, at 17.9%.

Again, as McMillan argues, the evidence suggests that the major factor bedeviling Alberta’s fiscal situation is revenues. For 2018–19, Alberta collected 14.1% relative to GDP compared to the next highest province, Saskatchewan, at 17.4%—the biggest difference in the case of MacKinnon’s old stomping grounds being that province’s 11% harmonized sales tax. In fact, Alberta collects roughly $11 billion less in taxes than Canada’s next highest taxing provinces, British Columbia and Saskatchewan. 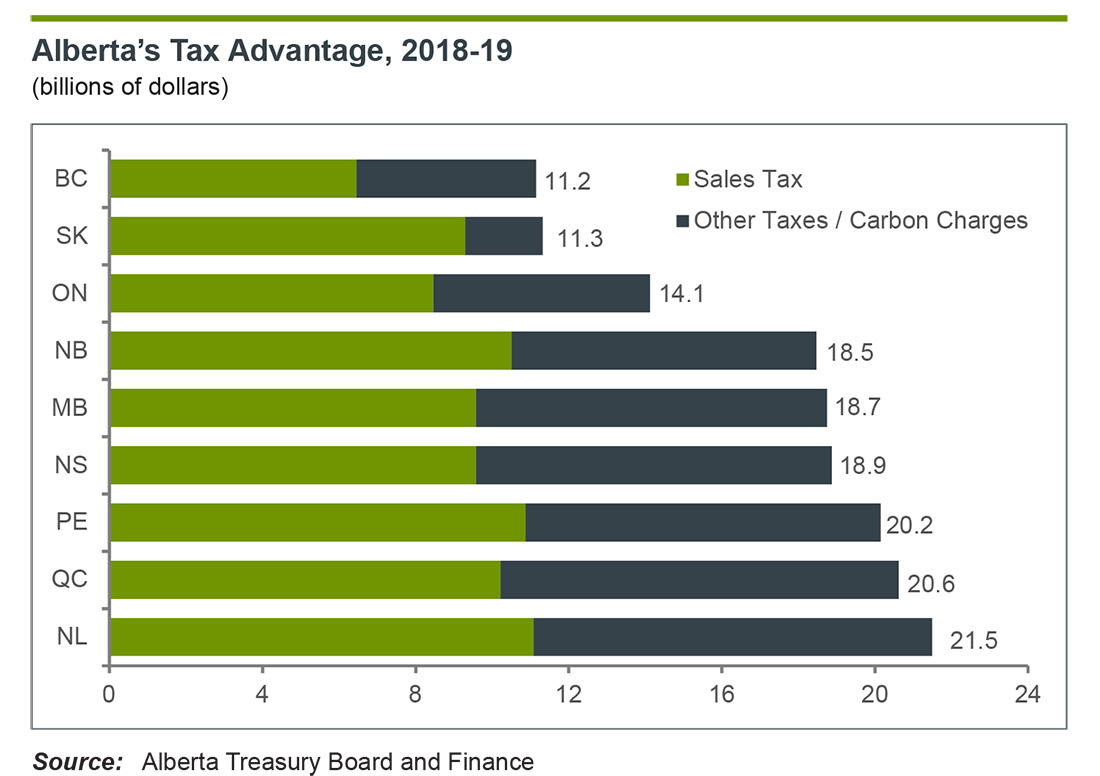 As McMillan shows, and as similarly argued by Ron Kneebone and other economists, Alberta’s fiscal difficulties reflect a continued over-reliance upon resource royalties to fund necessary programs, with the result that the economy’s boom and bust is mirrored by a pattern of boom and bust on public expenditures. It’s a problem that the NDP, like governments before it, failed to address. 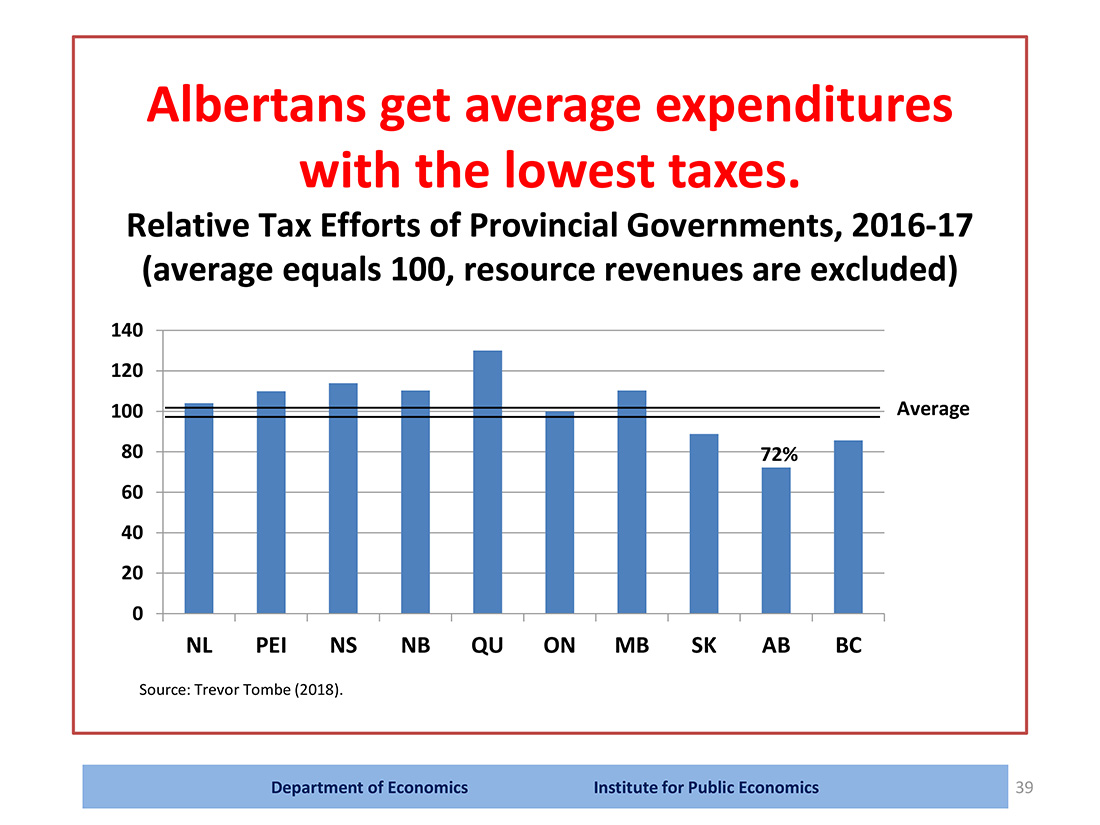 This pattern is not accidental, however. It is the result of bad policy choices made by past Alberta governments to keep taxes low—thereby to maintain a chimerical "Alberta advantage"—while paying for public services with royalties from non-renewable resources.

A famous Zen koan asks, “What is the sound of one hand clapping?” The panel’s mandated approach of tackling Alberta’s fiscal picture with one hand tied behind its back provides in the case of Alberta an answer: it is the sound of severe—and unnecessary—cuts to education, health, social services, and other programs.

* As McMillan explains in his report, Hard Math, Harder Choices: Alberta's Budget Reality, "Household incomes are a useful comparator for three main reasons. The first is that income is a major determinant of demand for goods and services, including those provided by governments. A second reason is that household income is a measure of fiscal capacity; that is, it accounts for the ability of a province or country to provide or finance public outputs. Finally, because labour is an important input into public goods and services and governments must be competitive in the wages and salaries, average incomes reflect a significant cost component of government budgets."