from guinea pigs to heroes (and back again?)

A quick Google search suggests that this is the first year the Prime Minister has issued a formal statement (and tweet) to mark National Laboratory Week. In his message, Prime Minister Trudeau acknowledged the “the invaluable and life-saving contributions of our country’s dedicated medical laboratory professionals” during the COVID-19 pandemic

Nationally and internationally, labs have been generating more column inches than in recent years, with articles in Forbes, the National Observer, Globe & Mail, and Postmedia publications – all asserting the necessity of a fully-resourced and fully-staffed laboratory service during this public health crisis, and reminding readers of their importance to daily, post-pandemic healthcare.

Here in Alberta, Premier Jason Kenney has added his voice to those cheering our nation- and world-leading testing rates and the achievements our lab professionals have contributed to keeping the worst case scenario at bay. 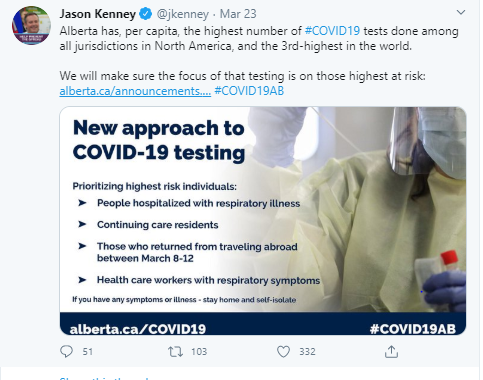 As of the end of April, testing had topped 150 000 (161 245 total tests as per May 3, 2020 Chief Medical Officer of Health briefing). That equates to 1 in 27 Albertans being tested, or 36.63 per thousand residents. That figure puts Alberta well ahead of Canada as a whole, and in the same league as Ireland, Italy, and Norway (see chart below) 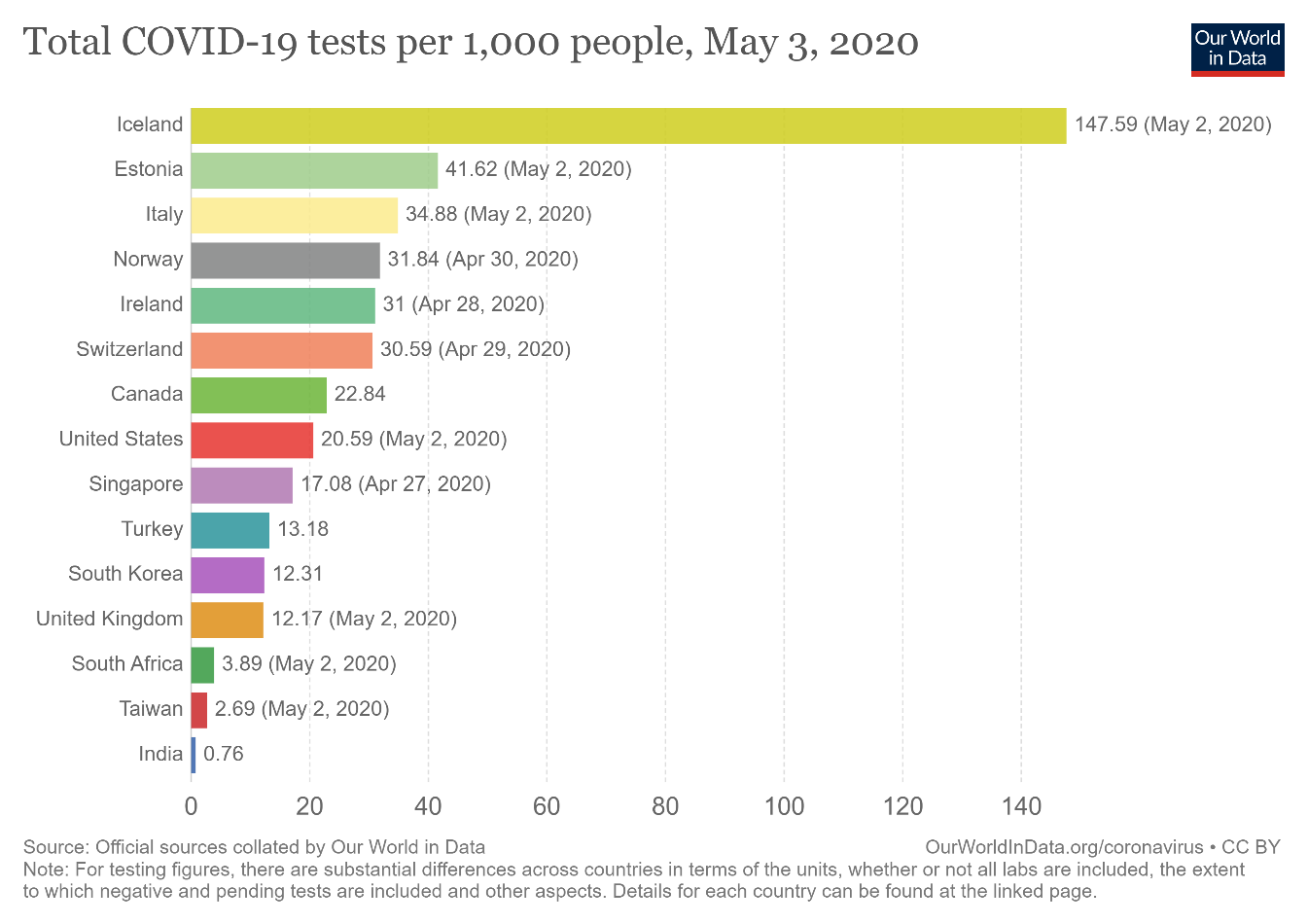 “You cannot fight a fire blindfolded. And we cannot stop this pandemic if we don’t know who is infected. We have a simple message for all countries: test, test, test”.

Since the first cases of the virus were detected in the province, Alberta has consistently had among the highest per capita testing rates in Canada. Testing facilities are operating nearly around the clock – from 6am to 2am daily, recruiting anyone with related training, and adding extra shifts so that equipment doesn’t sit idle.

This is all possible because of the highly integrated structure of Alberta’s public funded laboratory system, according to Dr. Michael Mengel  North Sector Medical Director for Alberta Precision Laboratories :

“Alberta laboratories had two advantages when the COVID-19 pandemic hit, allowing them to ramp up early and perform more tests per capita than almost any other jurisdiction in Canada. One had to do with timing and the other with organization. … The second advantage is we have strong public health leadership and an integrated health-care system.”

So, Alberta’s clinical laboratories – from medical technologists and assistants, laboratory scientists, pathologists, doctoral scientists, IT specialists and researchers, to leadership and volunteers – are one of the superheroes of this pandemic. They deserve a significant amount of the credit for steering Alberta away from the probable worst-case scenario to our current relatively low numbers. Along with our nurses, doctors, respiratory technicians, grocery workers, delivery drivers, and everyone who is keeping us alive, safe, and fed.

But rewind a few months, and the political story being told was very different. In March 2019, just prior to the provincial election, Kenney hammered down his pledge to cancel the NDP’s plans for a modernized, centralized, wholly public lab facility for Edmonton and northern Alberta. 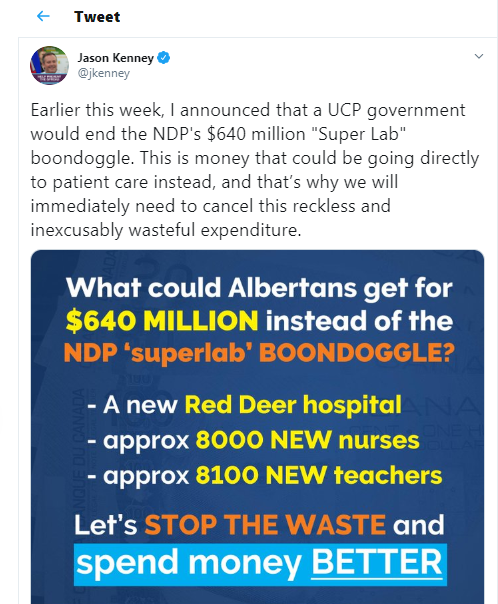 Far from lauding them as “heroes”, Kenney’s dismissal of labs as not “frontline” medicine – even though 70% of medical decisions rely directly on lab testing – sparked outrage among lab professionals. His depiction of the much-needed Edmonton Lab Hub (aka, the Superlab) as a “boondoggle” - an expensive waste of money on a frivolous vanity project - revealed a profound ignorance about the pivotal role of labs within our healthcare system.

If we boot up the time machine and head back even further, we begin to get a clear picture of lab services as the guinea pig being subjected to one political experiment after another.

Prior to the NDP government’s 2016 decision to integrate DynaLife services into the public lab system when its contract expires in 2022, Alberta’s lab services were spread across a fractured array of systems.

After a cumulative 40% budget cut during the Klein years, a north-south split was established with the creation of Calgary Lab Services as a public-private partnership, while Edmonton and the northern zone contracted all non-hospital lab services to DynaLife’s precursors (previously known as Dynacare, DKML, and other iterations). When Dynalife’s first contract was nearing expiry, the then Progressive Conservative government sought a sole-source contract for Edmonton laboratory services with Australian Sonic Labs. After a court battle with DynaLife, who alleged the bidding process was flawed and the election of the NDP who sought to preserve the publically funded structure of the laboratories Sonics’ contract was cancelled.

AHS and the Health Quality Council of Alberta issued a report on lab services (Moving Ahead on Transformation of Laboratory Services in Alberta), which recommended an integrated, province-wide public lab system, one lab information system, and a commitment to planning for new equipment and infrastructure. A site for a new provincially-owned consolidated laboratory hub in Edmonton was unveiled in 2017.  This new laboratory hub would replace the outdated and over-crowded hospital and public health laboratories in the city.

In 2019, Alberta Public Laboratories was created to consolidate laboratory services and staff from across the province, leading to faster access to lab results and better patient outcomes, and improved efficiency of Alberta’s lab system. When the UCP won the 2019 election, the plans were reinvented yet again. The Edmonton laboratory hub , already under construction, was summarily halted and the $50 million buy-out of DynaLife services was cancelled. The word “public” was apparently so offensive that the name of the new AHS subsidiary had to be excised. The renamed Alberta Precision Laboratories have been poised to request proposals to contract out essential community based lab services across the province.

All this, based on a single recommendation from page 122 of Ernst & Young’s “review” of AHS, despite the negligible potential for savings – and “based on a budgetary misdiagnosis”.

Yet now, in the middle of the greatest public health crisis in a century, the health of the province depends on a fully-resourced lab service – and so does the economy. The UCP government’s “Relaunch Alberta”, the plan to transition the province back to a semblance of pre-pandemic normality, hinges on the capacity for extensive testing: up to 20 000 tests per day, and ruthless contact tracing of every possible transmission.

Such an ambitious target provokes important questions: With labs already mobilizing additional staff, taking over meeting rooms and storage spaces, and running 20 hours a day, our daily testing rate averages around 4000. Following the cancellation of the Edmonton laboratory facility, the lack of space and equipment was already causing a shortage of capacity. Where will the resources come from? The government has allocated an addition $500 million to AHS to boost its pandemic containment operations, but that money won’t stretch to include permanent improvements to the laboratories. Where will the additional testing machines come from, and the staff to run them? While Alberta (along with Ontario) had recently contracted to purchase thousands of rapid-results DNA analyzers from Canadian tech company Spartan BioScience, the machines have since been recalled due to concerns about their effectiveness. Despite Premier Kenney’s bravado about circumventing Health Canada regulation to access potential new treatments and technologies, the recall puts paid to that bellicose assertion. Obtaining Health Canada approval may be weeks – or even months – away. And every innovation of new technology requires new training and validation. How will this effort be co-ordinated? It will only be possible under a unified coordinated public lab system.

Our lab workers will persevere, and continue to rise to the occasion. But what happens after the pandemic has run its course and the curve has flattened? When the UCP government turns its attention from the public health crisis to the “great fiscal reckoning” they have threatened looms on the horizon? Will public labs and lab workers remain the heroes of the story? Or will they once more be cast as the guinea pigs in a privatization experiment?