What Census 2016 reveals about income inequality in Alberta

Last week Statistics Canada released data on income—and income inequality—from the 2016 census. The official interpretation of the numbers, and the one echoed by mainsteam media outlets such as Postmedia and CBC, painted an overall rosy picture of rising income and fewer Canadians in poverty.

This interpretation appears to bolster the Trudeau government’s mantra “growing the middle class,” and feeds into the current optimism generated by our rebounding economy.

And, on the surface, there does appear to be some positive news.

A closer look at the latest census numbers, however, reveals several significant gaps in this story—gaps that obscure a persistent and troubling degree of inequality in Alberta.

First, it is worth remembering that these figures represent the trend from 2005 to 2015, and do not give any indication of the impacts from the 2014–2016 downturn in the petroleum industry. So, while Saskatchewan, Newfoundland and Labrador, and Alberta saw big increases in their median incomes, the effects of job losses and decreased investment in the energy sector may not become apparent until the next census.

Second, while there is a trend towards absolute increases in income, the relative gains are decidedly unequal for different segments of the population. The top 1% are on the receiving end of a vastly disproportionate share of income. When broken down by the national, provincial, and municipal levels, the result is a story of vast inequality in our province, especially in Calgary.

Calgary boasted one of the highest median household incomes in the country, and by far the highest among Canada’s largest cities—nearly $25,000 above the national average. While census data released earlier this year indicated a big drop in Calgary’s median after-tax income (as much as 15% from 2014), the disparity between the highest and lowest income levels suggests that even wage cuts and job losses at the high end have not been sufficient to allow lower earners to catch up. Instead, the decline has hit across income levels, but with disproportionate impacts on lower earners.

Across Canada, the median income for the top 1% of earners was $234,130 (up 14% from 2005). The richest 1% in Canada, therefore, made nearly 7 times the national median wage of $34,204. In Alberta, this disparity is even more stark: the top 1% in the province earned over 46 times the income of the poorest 10%. The distribution of income is also decidedly unequal at the city level: Calgary’s top 1% of income earners lapped their poorer counterparts (the bottom 10%) 62 times, and made 10.3 times more than the middle income earners. In Edmonton, the top 1% earned 6.7 times more than middle income earners.

Far from growing the middle class, these numbers indicate that superficial gains merely mask a deeper inequality of income distribution. Andrew Jackson of the Broadbent Institute summarizes this trend, pointing out that the “top are pulling further ahead from the middle” and even further from the lower income deciles.

In Alberta, the distribution is extreme: since 2010, only the top 10% have seen their share of income increase, and it has done so dramatically at the expense of every other decile. 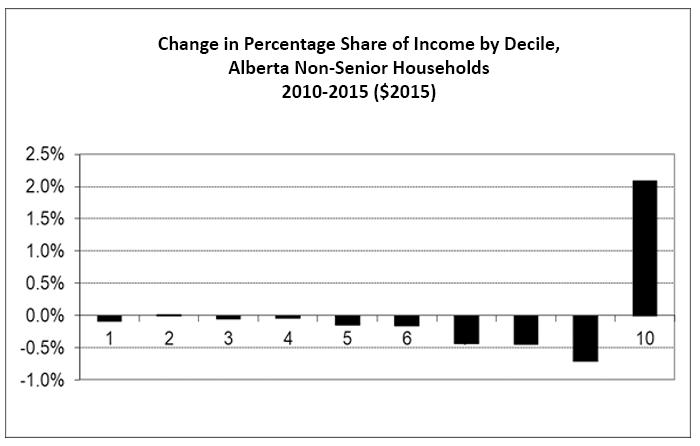 This illustrates rather viscerally how, at one of the high points of Alberta’s economy over the last 40 years, the lion’s share of financial gains went to the richest 10% in our province. And this trend is not new: as evidenced by the table below, income inequality in Alberta has remained virtually unchanged for four decades. 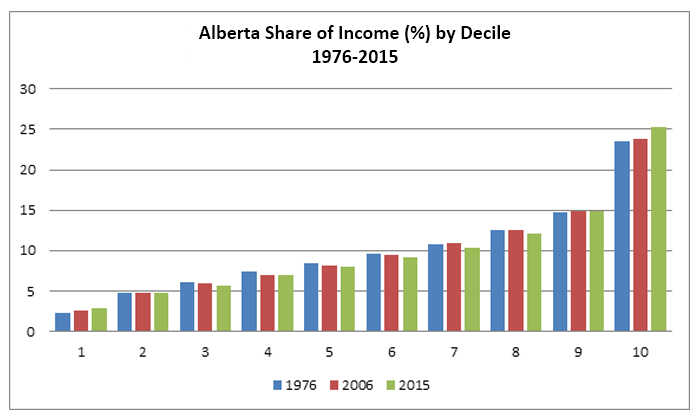 When taken in the long view, it becomes clear that the only groups who have increased their share of income, in real terms, since 1976 are the very lowest and very highest deciles. For the bottom 10%, this increase has been marginal, at only 0.7%. Meanwhile, the top 10% have maintained their share consistently for 40 years, and have seen significant jump of 1.5% in the last decade. The six income groups in the middle, the so-called middle class, have all seen their share of income decline since 2005 and their current income share remains lower than four decades ago. The “success” story in Alberta, then, can only be claimed by the very top earners, while everyone else is struggling to hold their ground.

Income inequality also still remains the case for women in Alberta. While 96% of Canadian couples reported dual income, among Albertan couples only 29% claimed a comparable income (with each partner contributing between 40–60% of their combined income). This is the lowest in Canada, with the national average closer to one-third. As Kate McInturff of the Canadian Centre for Policy Alternatives shows, the gender income gap remains the highest in Alberta, and while both genders have claimed substantially higher incomes since 2005, the gap remains around $20,000. For women in Calgary, this translates to earnings of 68 cents on the dollar compared to men, while in Edmonton the gap is even higher, at just 63 cents for every dollar earned by men.

Nationally, while there appeared to be a small victory in terms of reduced child poverty (among children aged 5 and younger, while among children between 6 and 17 the rate remained unchanged), more seniors were in low-income households than a decade ago—up 2.5% to 14.5%. Overall, across Canada, the low-income rate remained stable at 14.2% (up 0.2% from 2005). According to StatsCan, “Low-income rates fell fastest in metropolitan areas related to the resource boom,” and this is evident in the numbers for Alberta: a total low-income rate of 9.3%. Although Alberta also had the lowest rate of children in low-income households, at 12.8%, there has been virtually no change since 2005 (12.9%). Edmonton (at 13.2%) and Lethbridge (15%) had higher rates than the provincial average, while Calgary was slightly below (at 12.2%). Looking ahead to the next census, we may see these figures improve, as the impacts of the Alberta Child Benefit and the changes to the federal child benefit become apparent.

The census numbers can tell many different stories, but the story in Alberta is one of significant inequalities: between Alberta and the rest of the country, within our biggest cities like Calgary, and between the very richest 1% and the rest of us. When we dig beneath the veneer of the “success story” of our resource-based economy, it becomes clear that, even in relatively good economic conditions, the rising tide of energy-related incomes do not lift all boats—in fact, it leaves many floundering in its wake.