Real Increases Have Been Moderate 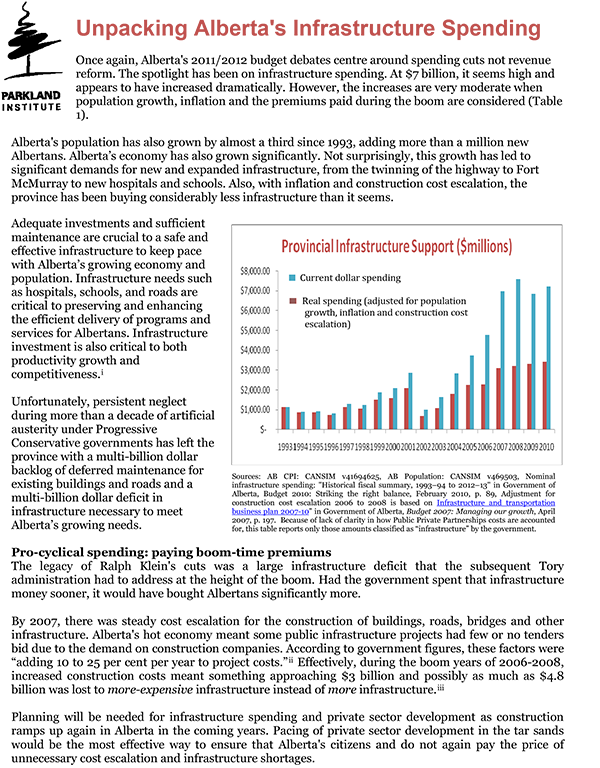 Once again, Alberta's 2011/2012 budget debates centre around spending cuts not revenue reform. The spotlight has been on infrastructure spending. At $7 billion, it seems high and appears to have increased dramatically. However, the increases are very moderate when population growth, inflation and the premiums paid during the boom are considered.

Alberta's population has also grown by almost a third since 1993, adding more than a million new Albertans. Alberta’s economy has also grown significantly. Not surprisingly, this growth has led to significant demands for new and expanded infrastructure, from the twinning of the highway to Fort McMurray to new hospitals and schools. Also, with inflation and construction cost escalation, the province has been buying considerably less infrastructure than it seems.

Adequate investments and sufficient maintenance are crucial to a safe and effective infrastructure to keep pace with Alberta’s growing economy and population. Infrastructure needs such as hospitals, schools, and roads are critical to preserving and enhancing the efficient delivery of programs and services for Albertans. Infrastructure investment is also critical to both productivity growth and competitiveness.

Unfortunately, persistent neglect during more than a decade of artificial austerity under Progressive Conservative governments has left the province with a multi-billion dollar backlog of deferred maintenance for existing buildings and roads and a multi-billion dollar deficit in infrastructure necessary to meet Alberta’s growing needs.

The legacy of Ralph Klein's cuts was a large infrastructure deficit that the subsequent Tory administration had to address at the height of the boom. Had the government spent that infrastructure money sooner, it would have bought Albertans significantly more. By 2007, there was steady cost escalation for the construction of buildings, roads, bridges and other infrastructure. Alberta's hot economy meant some public infrastructure projects had few or no tenders bid due to the demand on construction companies. According to government figures, these factors were “adding 10 to 25 per cent per year to project costs.” Effectively, during the boom years of 2006-2008, increased construction costs meant something approaching $3 billion and possibly as much as $4.8 billion was lost to more-expensive infrastructure instead of more infrastructure.

Planning will be needed for infrastructure spending and private sector development as construction ramps up again in Alberta in the coming years. Pacing of private sector development in the tar sands would be the most effective way to ensure that Alberta's citizens and do not again pay the price of unnecessary cost escalation and infrastructure shortages.

According to Scotia Bank, right across Canada infrastructure assets declined relative to GDP from 1975 to 2005, and have lagged behind the U.S. throughout the decade of 1999 to 2009. Alberta is no exception.

In 2010, the Auditor General found the Department of Infrastructure “still has not made any meaningful progress in developing objectives, timelines and targets for reducing deferred maintenance” and noted that deferred maintenance was still not being publicly reported.

As new schools, research facilities, clinics and hospitals are built, operating budgets need to reflect increased costs for training, educating, staffing and running the facilities. This necessitates increases beyond population growth and inflation in many cases, increases that recent budgets have not included despite higher levels of infrastructure spending. This means that schools are closed as new schools are built, class sizes remain high, and new research and health care facilities sit empty. Infrastructure spending plans should be tied to specific operations budgets before construction begins in order to ensure the budget is adequate to address new staffing and operation costs needs.

Belated attempts to narrow the gap between Alberta’s infrastructure needs and public investment have so far fallen short. Had Progressive Conservative governments invested sufficiently in the many years before the boom, more could have been built for less. Instead, much of the recent increase in investment has been eaten up by increased construction costs and has proven insufficient to overcome a legacy of underfunding.

Put in its proper context, recent increases in infrastructure investment cannot be considered out-of-control and any reduction would only worsen Alberta’s infrastructure deficit and maintenance backlog.