The Return of the Trojan Horse

Alberta in the New World (Dis)Order 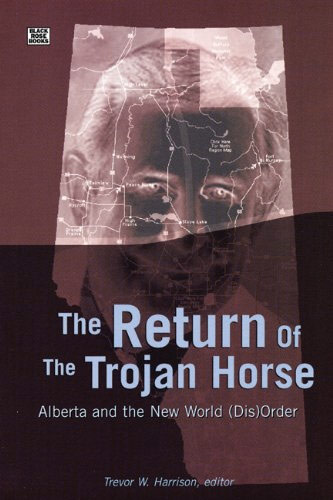 First elected in 1993 on a platform of "common sense revolution," a decade later Ralph Klein's Conservative party remains in power, but the gloss is off its "revolution." Deficits and debt have been eliminated, but new problems and new issues have arisen, such as energy deregulation and water shortages. Efforts to export the revolution – to remake Canada in Alberta's image – have stalled, with the defeat of the Harris Conservatives in Ontario and the collapse of the Reform and Alliance parties federally. Meanwhile, at the worldwide level, neoliberal globalization – all the rage in the early '90s – is now in retreat, replaced by war, threats of terrorism and growing economic instability.

The Return of the Trojan Horse examines the long-term lessons of the Klein revolution and suggest where Alberta and Canada may be headed in the next decade. An original compilation of critical essays on Alberta's policies, written by some of Alberta's (and Canada's) best authors who come from a wide spectrum of viewpoints and backgrounds, all blending insight with journalistic flair.

Praise for The Return of the Trojan Horse:

"... gives anyone a long list of serious questions to ask about the government's course of action. This book deserves, nay demands, a read."
- Edmonton Journal

"Widely excerpted, cited and debated, Trojan Horse has had the effect of giving Albertans permission to fight their own government."
- Globe and Mail

"Peel away the careful packaging of the Klein government's record and what have you got? This book tells the story. Facts, clear prose, and the courage to tell it straight make it essential reading."
- Canadian Forum

The Return of the Trojan Horse is available from Parkland Institute. Contact us for details.