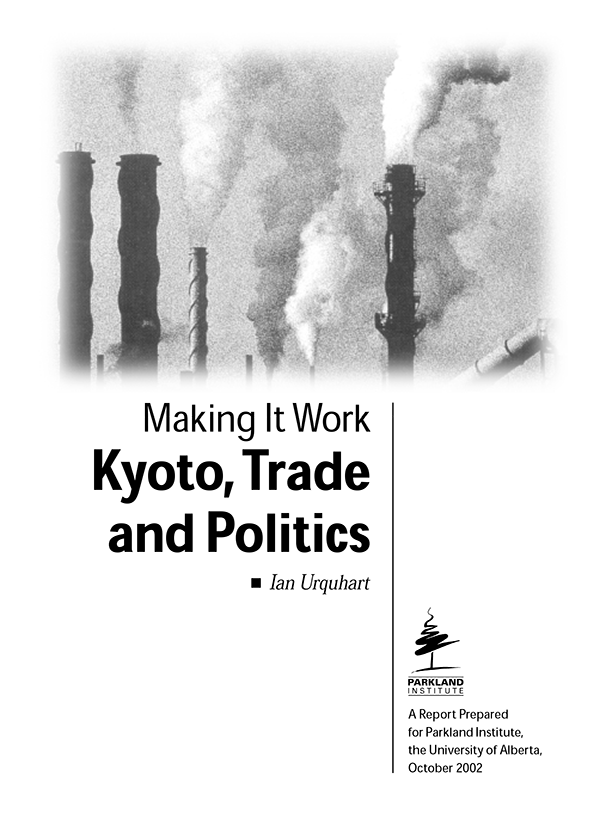 How will trade agreements and federalism constrain Canadian policy makers if they implement the Kyoto Protocol? This question is the focus of “Trade Agreements,Federalism and the Politics of Implementing the Kyoto Protocol,” published by the Parkland Institute.

Its conclusions likely will not sit well with partisans on all sides of the Kyoto debate:

The paper begins by describing the Protocol and detailing the significant concessions Canada won during the last two rounds of Protocol negotiations. These concessions, on subjects such as carbon sinks and international emissions trading, dramatically reduce the size of the cuts in domestic greenhouse gas emissions Canada must make in order to meet its Kyoto target. For example, under Kyoto’s carbon sinks provisions Canada can meet twenty per cent of its annual emissions reduction target by afforestation and reforestation - growing trees. These concessions, when combined with the American refusal to ratify Kyoto, should enable Canada to meet its Kyoto commitments at a fraction of the costs cited by the Protocol’s most strident critics and without making the Draconian cuts in actual GHG emissions these critics wring their hands about. It is simply not true to tell the public, as too much reporting on Kyoto has done, that the only Kyoto compliance policy option open to Canada is domestic emissions reductions.

The second section of the study argues that carefully crafted environmental regulations actually may actually improve, not destroy, the competitiveness of Canadian industry. This argument, of course, is at variance with the public’s understanding of Kyoto’s impact, poisoned too often by self-interested rhetoric from various quarters.

The third section outlines a range of policies that a handful of organizations - the International Energy Agency, the David Suzuki Foundation, the World Wildlife Fund, the Pembina Institute for Appropriate Development, and the Canadian Centre for Policy Alternatives - have recommended to help Canada meet its Kyoto commitment. These policies include, but are not limited to: subsidies for renewable energy, increased automobile fuel efficiency standards, a national emissions trading system, and a transition strategy for workers whose jobs will be jeopardized if Canada implements Kyoto.

But, does our membership in the World Trade Organization (WTO) and our obligations under the North American Free Trade Agreement (NAFTA) effectively brake any effort to implement these policies? If many CEO’s are likely to close their eyes to the study’s arguments about competitiveness, some environmentalists likely will blanch at the paper’s suggestion that the WTO is not necessarily an environmental straitjacket. The WTO will not necessarily prevent Canada from implementing many of the policies identified in this report. While the study recommends that the current Doha round of trade negotiations should strive to improve the WTO’s environmental sensitivity, the WTO’s environmental record is not as bleak as some Green rhetoric would have the public believe.

NAFTA is more problematic, despite its containing of some promising environmental protection provisions. NAFTA’s energy provisions figure prominently here. The national treatment provisions outlined in Article 606.1(a) may frustrate efforts to insure that more of Canada’s electricity comes from renewable energy sources (defined as solar, wind, and small scale hydro power). Other elements of NAFTA’s energy chapter - its ban on export taxes and its guarantee of proportional access to Canadian energy supplies for the United States - prevent Canadian governments from introducing other measures that could assist a GHG emissions reduction plan. Finally, we do not have sufficient experience with NAFTA to know whether legitimate environmental regulations will fall victim to the investment chapter’s expropriation and compensation article. The investment chapter must be clarified or changed to insure that NAFTA cannot be used to challenge environmental regulations that are not disguised trade protectionism.

The report also highlights two notably absent policy options - “big” hydro and a national electricity policy. Their absence from the Kyoto debate is unwarranted. Hydroelectricity should be valued for its potential to replace electricity currently generated by coal-fired plants; a national electricity policy is needed to move cheaper hydropower to Canadian markets. Significant public investment and dramatic changes to the National Energy Board (or the creation of a Canadian Electricity Board) will be needed to breathe life into this option.

Finally, Canadian federalism complicates whatever national plan of action will be proposed. Provincial responsibility for developing, conserving, and managing natural resources has figured prominently in today’s angry debates over ratifying and implementing Kyoto. Alberta, emboldened by its jurisdiction over natural resources, has threatened to go to court if the federal government’s plan does not give pride of place to provincial resource powers. This threat is ill advised; it is akin to constitutional brinkmanship. Past judicial rulings on powers over treaties and the environment make it very possible that a constitutional gambit may reduce provincial powers.

Constitutional showdowns and bitter federal-provincial conflicts likely await us unless federal and provincial leaders show some genuine leadership on the Kyoto file. This leadership is not found in the federal government: Ottawa’s failure to involve the provinces in developing a national plan for reducing greenhouse gas emissions borders on the irresponsible. Nor is it found in the sleight of hand that passes for global warming policy in Alberta. Reduced “emissions intensity” does not equal reduced emissions. The study ends by urging federal and provincial governments to recognize the legitimacy of their opponents’ interests and to search for a compromise. Governments must sit down around the conference table and craft policies and institutions that take all of the challenges of reducing greenhouse gases seriously. The approach was absent during another political crisis alluded to in today’s Kyoto rhetoric - the one centring on the National Energy Program. Canadians cannot afford to see that mistake repeated today. 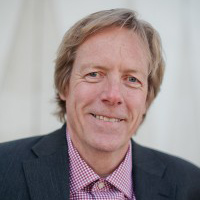 Ian Urquhart is a professor in the Department of Political Science at the University of Alberta. He is editor of the Wild Lands Advocate, the news journal of the Alberta Wilderness Association.