National Trends and Opportunities for the City of Edmonton 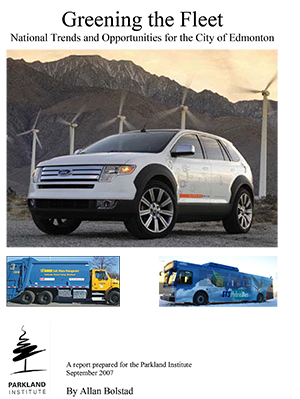 Greening the Fleet. It’s a new phrase that is quickly becoming a household term in municipalities across Canada, as they seek ways to reduce fuel consumption and emissions produced by their fleet of vehicles.

The stakes are high.

With fuel prices pushing past $1/litre and growing concerns about environmental damage produced by global warming, fleet managers are under increasing pressure to find new ways of doing business.
Some cities, like Edmonton, have focused on driver behaviour, in order to find ways to reduce the amount of fuel used on a daily basis.

Other cities, like Toronto, Hamilton and Calgary, have become much more aggressive, investing in alternative vehicles like gas-electric hybrids, diesel-electric hybrids and plug-in hybrids. These vehicles get much better mileage and produce far less emissions, including the greenhouse gas CO2, which is one of the main culprits contributing to global warming.

These cities are also investing heavily in alternative fuels, such as biodiesel, which also reduces the impact their fleets have on the environment.

On the west coast, an organization called the Fraser Basin Council has gone so far as to develop a program that rates green fleet programs and provides a wealth of advice for fleet managers.

In light of these developments, it is clear that the City of Edmonton could do much more to “green its fleet” of 3,500 vehicles.

With recently-announced federal rebates for fuel efficient vehicles, the time has come for Edmonton to acquire many more gas-electric and diesel-electric cars and light trucks. It’s also time to invest in Smart Cars, plug-in hybrids, diesel-electric garbage trucks and idle-free trucks (where the heater runs off a separate motor so the truck doesn’t have to be running).

It could also ramp up its investment in diesel-hybrid buses and ensure that is has an order in for the ultra-efficient all-electric vehicles, once they have been approved for general use by Transport Canada.

It also makes sense for the city to get more active in its purchase of alternative fuels, like biodiesel. Other cities are seeing good results with blends of 20% in the summer months and 5% in winter, which work well in the northern Alberta climate. Edmonton could see a significant reduction in its fleet emissions through this change alone.

The city administration in Edmonton hopes to begin work shortly on a green fleet program, so that it has a proposal to present to city council in early 2008.

Its case for political support will be compelling.

Fuel prices are rising dramatically and will consume a growing portion of the city’s budget as the size of the municipality continues to increase.

The city is nowhere near its council-approved greenhouse gas reduction targets, a situation that will soon be extremely problematic as Canada, along with the rest of the world, attempts to address global warming.

And citizens are looking for leadership, as they become increasingly uneasy about the growing cost of local government and the impact urban development is having on the environment.

In short, the situation cries out for political leadership, for the will to invest in new technologies that will have a huge impact in the near future.

The time has come for Edmonton’s civic leaders to support an aggressive Green Fleet Plan, designed specifically for the City of Edmonton. 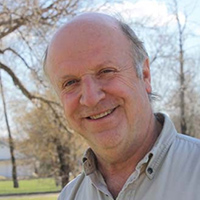