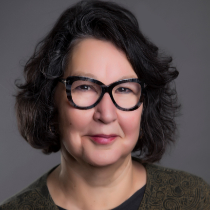 Dr. Cora Voyageur is a professor in the Sociology department at the University of Calgary, where she as taught since 1998. She is a member of the Athabasca Chipewyan First Nation from Fort Chipewyan, Alta. Her great-grandfather, Alexandre Laviolette, was a signatory for Treaty 8 in 1899. Her ancestors served as hereditary chiefs for her First Nation until the mid-1980s. She is a residential school survivor. Her research focuses on the First Nation, Metis and Inuit experience in Canada and she specializes in Indigenous women’s leadership, health, entrepreneurship and community development. She is an award-winning teacher and researcher who has presented her research findings at the prestigious Oxford Round Tables in Britain and at the United Nations in New York City, and has also taught at the Golda Meir Centre for International Leadership in Haifa, Israel. She has published eight books (with another currently under review) and more than 60 academic articles and book chapters. She developed the Indigenous Women in Leadership program at the Banff Centre and was the faculty leader since the program began in 2003 until 2019.