Back to Hewers of Wood and Drawers of Water

Energy, Trade, and the Demise of Petrochemicals in Alberta 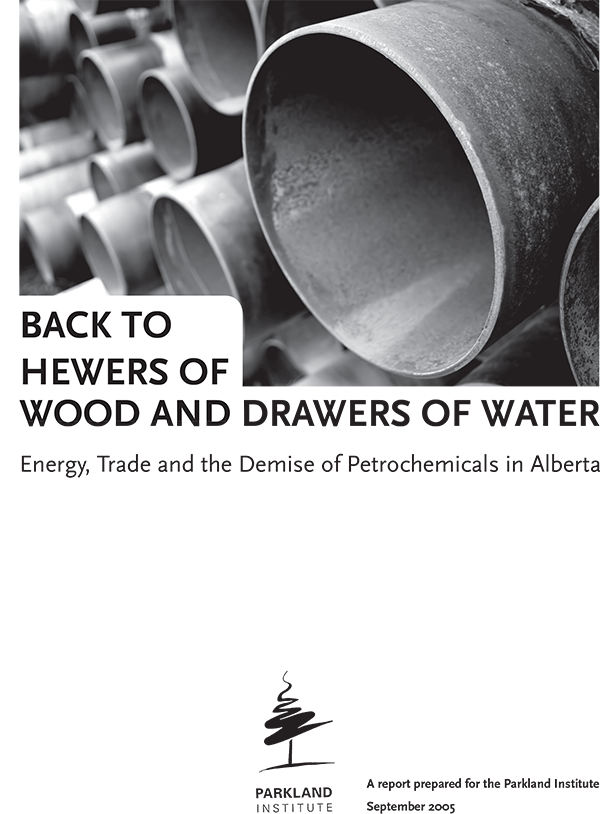 Canadians are questioning the logic of having traded away our energy sovereignty with NAFTA, the North American Free Trade Agreement. The cost of these concessions has been high: Canada no longer has the ability to adequately manage price or supply of natural gas or regulate exports. Consequently, oil and natural gas prices have been rising dramatically and fluctuating wildly while conventional reserves are on the decline. These price and supply changes are having impacts across the economy and are causing job loss.

This study focuses on one example – Celanese, one of Alberta’s oldest petrochemicals plants, is closing its operations in Edmonton and relocating where production is cheaper. In this report we tie this closure to natural gas price and supply changes. We then place the closure in the context of broader trends in the petrochemicals industry and more generally, Alberta’s low level of value-added manufacturing. We make the connection with the lack of both energy and industrial strategies in the province and the country as well as the energy provisions of NAFTA.

The Alberta government has not recognized any of these interconnections in its response to the Celanese closure; its explanations instead focussed on free markets. The Alberta government also views the Celanese closure as an isolated exception to (what it claimed to be) the robust health of the Alberta petrochemicals industry. This research reveals that both levels of government actually had a formative impact on natural gas prices, and thus the closure through policies on NAFTA, pipelines, royalties and exports. The research also throws into question the future health of the industry.

Celanese is not unique: the petrochemicals industry as a whole is heavily reliant on natural gas as both an input and an energy source. Consequently, much of the petrochemicals industry is feeling the pressure of increased prices. Supply is also a concern. As supplies of conventional gas dwindle, the petrochemicals industry has raised concern with prioritizing natural gas use in the tar sands and domestic heating. As Ramesh Ramachandran, the CEO of Dow Chemical Canada, put it, “We currently use a signifi cant portion of Alberta’s gas to extract oil! This is akin to using $100 bills to light the candles at the dinner table.” Dwindling supply, coupled with higher prices, is driving new investments elsewhere, such as to Asia and the Middle East.

This study identifies the causal factors in these natural gas price and supply changes as NAFTA, gas and pipeline policies and export policies. NAFTA had major impacts on Alberta’s natural gas prices and reserves by dramatically reducing citizens’ democratic control over non-renewable and declining energy resources. The significant changes included: national treatment rules by which foreign corporations must be treated as if they are Canadian; the opening of the energy sector to foreign corporations; the prohibition of preferential pricing for Canadian industries; the elimination of export taxes, impact assessment requirements for export licences, and Canada’s 25-year vital supply safeguard; and the introduction of the “proportional sharing” requirement whereby current export levels are guaranteed to the U.S.

These changes had the effect of dramatically increasing exports, while reserves began to decline; natural gas exports increased by 233 per cent over the decade of the 1990s. The proportion of production that is exported has also increased, despite increased production, from 33 per cent to 49 per cent. In 2003 about 8.9 years of natural gas production remained in Alberta. Because of the proportional sharing rule, these exports are now locked in, guaranteeing supplies to the U.S. indefinitely at this inflated proportion regardless of the state of Canadian reserves. Government is prohibited from taking action to protect value-added industries from these negative impacts of NAFTA by the threat of legal proceedings by the U.S. government or even private corporations under NAFTA.

In spite of the obvious negative implications of NAFTA the trend may be toward further integration through expanding NAFTA to other countries in the hemisphere with the Free Trade Area of the Americas (FTAA), and through “deep integration” with the United States.

Provincial policies are also at fault in this natural gas scenario. Export policies such as the expansion of the pipeline capacity to the U.S., policies that allow the export of feedstock rich gas, and royalties that favour raw exports have all had serious negative impacts on value-added manufacturing, especially in the petrochemicals industry.

In spite of growth in China and low feedstock prices elsewhere, there could still be a future for petrochemicals in Alberta. However, the federal and provincial governments would need to choose different paths. Energy and industrial strategies are needed at both the provincial and national levels to manage competing demands and limited and falling reserves, and to plan for the future. To manage the energy resources in such a way that prioritises Canadian consumers and industries, Canada will need to exit NAFTA’s energy provisions and secure the kind of control over its energy resources that Mexico and the U.S. have. Though Mexico was forced to agree to some compromises, it maintains control over the three key aspects to energy resource sovereignty: pricing, production and export levels, confirming that Canada could choose a different path. The time is right for Canada to exit NAFTA. Not only do high petroleum prices combined with peak oil increase Canada’s bargaining power, but the U.S.’s unwillingness to respect NAFTA’s rules opens the door for Canada to exit the agreement.

An active industrial strategy that promotes value-added manufacturing and high-paying jobs is also needed to secure a future for Alberta’s petrochemicals industry. There have been governments in Alberta’s past that have made better efforts in this regard than has the Klein administration. The most obvious example is Premier Lougheed, whose government successfully built Alberta’s fledgling petrochemicals industry into the large sector it is today.

Though this report does not endorse all of the means used by Lougheed, it applauds his goals: diversification and building high-paying jobs for Albertans through value-added manufacturing. This report recommends that the citizens of the province and the country engage in serious debate on the development of a national energy security strategy. Albertans require a sovereign energy strategy that prioritizes Alberta’s needs first, and Canadian needs next, before exporting any surpluses. It must also focus on long-term supply as well as conservation, reducing dependence on fossil fuels, and building an economic transition plan for high wage industries. This report proposes creative solutions for a renewed export strategy, environmental strategy, energy strategy, industrial strategy, and fiscal strategy. It is hoped that these proposals will form the basis for discussions leading to an alternative path of development provincially and nationally – one that prioritises the interests of the majority of citizens, rather than those of a few large multinational corporations; one that aims to conserve non-renewable resources as much as possible, rather than selling them off fast; one that shifts away from burning our resources, and instead using them to provide quality jobs that support families and communities over the long term.