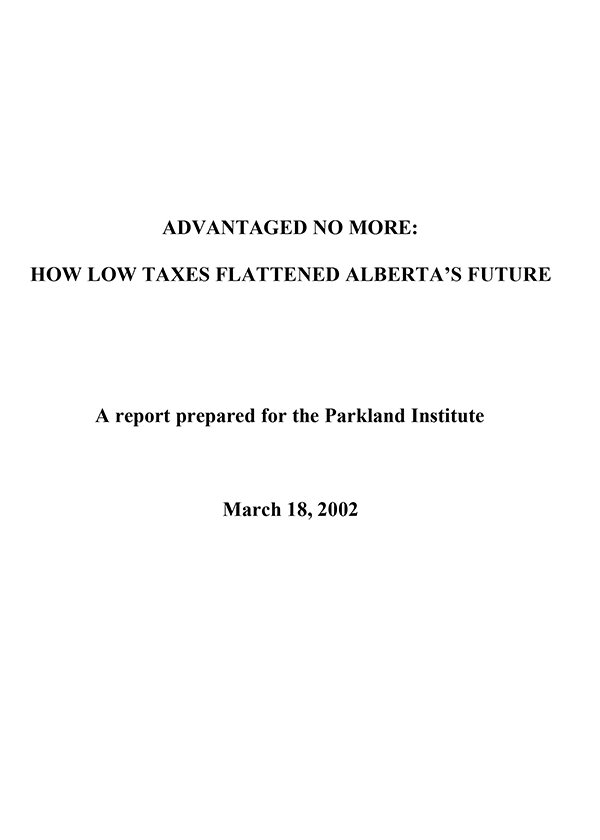 In preparation for the Alberta government’s upcoming 2002-03 budget, Parkland Institute with the assistance of some of the province’s top public policy advisors  set out to examine Alberta’s current fiscal situation. This paper highlights recent trends affecting provincial revenues and expenditures. On the revenue side, the paper concentrates on the province’s recent adoption of the single rate tax (SRT) and increased reliance upon oil and gas royalties for revenues. On the expenditure side, the paper focuses on long-term trends in spending on the “big ticket” items of health, education, and social services.

The paper argues recent government fiscal policies have created an artificial revenue crisis, the result of which has been a second stage crisis involving renewed cuts to valued public services, intensified labour strife, higher costs to average Albertans, and general economic instability. The paper argues that government explanations for the crisis (e.g., that expenditures are out of control) are not substantiated by any existing data and serve only to mislead the public. For this reason, the paper makes several suggestions for improving Alberta’s budget process and fiscal accountability.

Finally, the paper calls for a major rethinking of economic policy in Alberta, including the abandonment of the SRT in favour of a more progressive taxation system, repeal of the province’s Deficit Elimination Act, and creation of a Revenue Stabilization Fund.