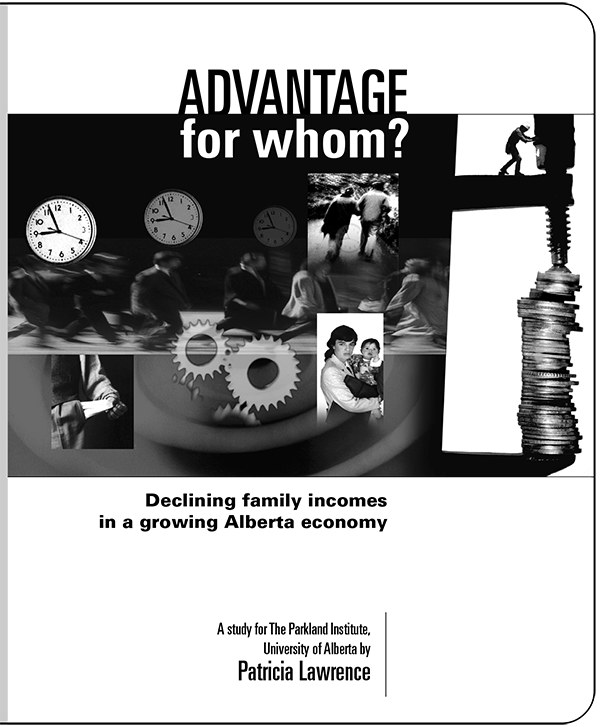 This report is an analysis of Albertans’ family incomes during the 1990s. It compares the incomes of Alberta families at all income levels, examines the income gap between the richest and poorest of families, and discusses the escalating stress that Alberta families face as they attempt to maintain their standard of living in an increasingly competitive market place.

In addition, Advantage for Whom? challenges certain assumptions behind Alberta’s current economic policy - does a growing GDP, low government spending, and a flatter tax structure really benefit Alberta families? If Alberta families are not benefiting from the Alberta Advantage, who is?

Most of the data used in Advantage for Whom? was originally compiled by Statistics Canada for the Centre for Social Justice and was used in their publications The Growing Gap and Canada’s Great Divide (Yalnizyan, 1998, 2000). Families are divided into 10 equal groups from lowest income to highest income. Each group is called a decile and includes 10 percent of the families in Alberta. Those in decile 1 are the poorest 10 percent of families; those in decile 10 are the richest 10 percent of families. Most of the income amounts cited in this report reflect the average income of families in each decile. All amounts are in constant 1997 dollars.

Income is defined in two ways. “Market income” refers to everything that a family earns as a result of their activities in the marketplace - all of their earnings from wages, salaries, selfemployment, and investments. “After-tax income” is a more comprehensive way of looking at families’ total income. It includes the total of a family’s market income plus any income received from government transfer programs such as employment insurance, child tax benefits, social assistance, etc. Income taxes paid are deducted from the total family income. The resulting amount represents Alberta families’ real income - the cash they have to provide for their shelter, food, clothing, transportation, and other needs.

There is no evidence to support the assumption that an ever-increasing GDP will result in a better standard of living for families. There is no discernable correlation between fluctuations in GDP and in the market incomes of families at any income level. For example, if wages had kept pace with GDP, a family earning the decile 3 average of $30,164 in 1990 would have had an after tax income of $41,585 in 1997. In fact, the average after-tax income for these families was $32,494. Similarly, if GDP were a real indicator of prosperity for average families, families in decile 5 would have had an after-tax income of $57,550 in 1997, 35.7 percent higher than their actual average of $42,397. In fact, the average after-tax income for families in all deciles has not grown at all during the last two decades.

Finally, the implementation of Alberta’s new “flat tax” structure in 2001 can only exacerbate income disparities in the province. The wealthiest Albertan taxpayers will benefit most from the tax cuts, while middle-income families will pay a greater proportion of the total tax revenues.

Therefore, one can only conclude that the much-touted Alberta Advantage is an advantage for the wealthy at the expense of low and middle-income families.

Patricia Lawrence has first-hand experience with several social issues - as a farm woman, she has raised children while living in poverty; seeing education as a solution to her family’s financial difficulties, she returned to school at the age of 30 and obtained a bachelor’s degree in psychology and English. She has worked in human services in municipalities and non-profit organizations.