A Time for Vision

A Sustainable and Equitable Economy 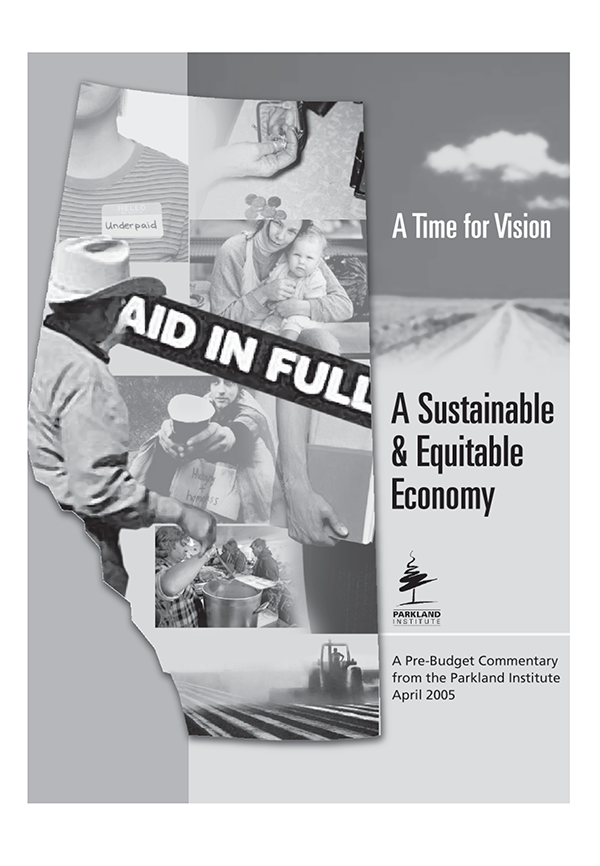 The April 2005 Alberta budget will be the first since the province declared the debt eliminated. It’s time for a bold vision, and this budget should lay the fiscal foundations for realizing that vision. The 2005 Throne Speech promises that All Albertans will share in the Alberta Advantage. To ensure this, we must collectively commit to building a socially sustainable and equitable economy.

In this document, we touch on some fiscal highlights to demonstrate that there are no economic obstacles to realizing such a vision. While we applaud some of the initiatives promised in the Throne speech, such as the promised increases to minimum wage, AISH, and funding for post secondary education, we show that these steps barely make up for many years of cuts and erosion by inflation. These are just quick fixes: minimum one-time increases that do not address the long-term problems and inequities in the province.

Alberta has experienced very strong growth, providing an excellent opportunity to lead the country in sustainability and equity. However, the benefits are not being shared equally. Poverty indicators such as food bank usage and homelessness have continued their upward trends, increasing by over 11% over the past year. To reverse this polarization, the budget will need to be based on a comprehensive long-term plan that includes deeper investments in key areas.

On the revenue side, there has been a continued shift away from reliable funds and a progressive taxation system toward reliance on regressive taxes such as gambling and consumption taxes, as well as health premiums. Unnecessarily low royalty rates and the lack of savings in the Heritage Fund also indicate a lack of concern for the future.

On the expenditure side we discuss spending trends in education, health and social programs.

For the K to 12 education system there has yet to be any significant funding allocated for implementation of the Learning Commission’s recommendations beyond class size. This applies to areas such as kindergarten, junior kindergarten, libraries and technology. For post secondary education, we assess the recently announced one-year funded tuition freeze and new endowment against prior funding cuts and the needs of the system. We find the new funding initiatives to be inadequate. While these provide additional grant and loan support for students struggling under debt loads, and funds for new research initiatives, what is really needed is new core funding for the institutions themselves.

In health care we identify that spending is not rising out of control but is steady in proportion to GDP. However, the area where costs are rising most is in the category with the most private sector involvement. In spite of this, the government continues to focus on privatization at the expense of cost effectiveness, knowing that it is cheaper to deliver the same services in the public sector. Another area deserving of more attention is the social determinants of health. The government needs to recognize the integration of all programs and the importance of poverty and inequality to health care.

Social assistance rates fall far short of the poverty line. This is another area that has yet to recover from the cuts of the 90s. In addition, the rates have been eroded significantly by inflation. Between 1993 and 2004 inflation totalled 27%. AISH rates, on the other hand, increased by only four percent and benefits for families received only a one-time increase of $20. In Alberta, supports received by a single employable person and a person with a disability are among the lowest in the country, and those for a single parent with one child are the lowest.

The provincial government recently made a commitment to increase the minimum wage from the lowest minimum wage in the country at $5.90 per hour to close to average at $7.00 per hour. It has not yet been decided how or when this increase will be implemented. The increase barely compensates for inflation over the last five years, when the last increase took place. If implemented in full, immediately, it amounts to an increase of 17 cents an hour after inflation.

Increasing the rate every five years or so when the pressure becomes too great is not good for business or for those working for minimum wage. With proper policy, this kind of shock effect would not be necessary.

A new vision for Alberta

Shifting to a sustainable, equitable economy

Alberta should be leading the country in more than GDP growth and employment. We should be setting an example by creating a comprehensive long-term plan that ensures the highest possible quality of life for all Albertans.

To this end we suggest a number of examples of changes the government could make to reverse the trends toward polarization and guarantee the highest quality of life for all, including future generations. Some examples include:

Can Alberta afford these changes?

Most of the surplus is from selling off our natural capital and the bulk of those revenues should be used to secure a future beyond fossil fuels. For this reason, we recommend returning to a progressive tax system and reinstating corporate taxes to prior rates to fund our recommendations.

Planning for the future beyond fossil fuels

To guarantee a future, we need to maximize the rents received from our fossil fuels: royalty rates need to increase. The province also needs to develop a clear strategy for both savings and investments that will build a diverse, sustainable economy for the future.