What the Paris Agreement Means for Alberta’s Oil Sands Majors 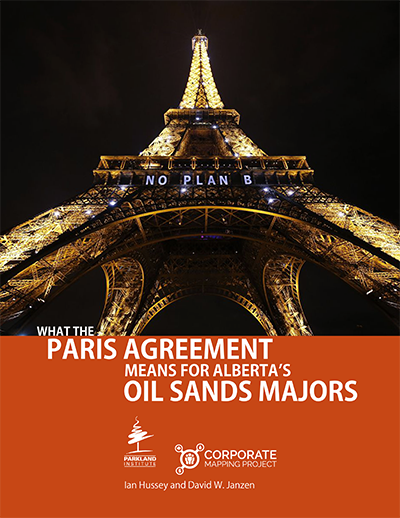 The Paris Agreement was sealed on December 12, 2015 and came into force on November 4, 2016. The central target of the Paris Agreement—a global average temperature increase of less than 2°C above pre-industrial levels (about 200 years ago)—is agreed upon by scientists as the necessary limit for reducing the risk of the most dangerous effects of climate change.

If humanity is to achieve the 2°C target, then we will need an energy transition to a low-carbon economy in the next three decades. This is an extraordinarily abrupt time frame compared to such transitions historically, and will require substantial planning and actions by governments and businesses of various sizes around the world.

Science-based plans to meet the 2°C target should involve concrete details on how national and subnational governments will meet a carbon budget; that is, a limit on the maximum amount of carbon pollution that can be released before we breach the 2°C limit. Staying within a 2°C carbon budget will necessitate a reduction in total greenhouse gas (GHG) emissions, which will require a steady scaling down of oil and gas production and combustion in the next three decades.

To date, government and industry responses to the Paris Agreement have been split between, on one hand, recognition of the threats posed by climate change and the need for transition and, on the other hand, resistance to transition. While many international energy producers are shifting away from carbon-intensive resources, many are not.

This split is particularly evident in the Canadian context. Canada helped create and pass the Paris Agreement, yet its provincial and federal governments have made relatively little progress towards meeting the goals of the agreement. Moreover, our country’s fossil fuel industries, particularly Alberta’s oil sands industry, have so far ensured that Canada’s emissions growth has at best flattened, rather than decreasing in line with our carbon budget implied by the Paris Agreement.

The majority of Alberta oil sands production is owned by the five companies that this report focuses on: Canadian Natural Resources Limited (CNRL), Suncor Energy, Cenovus Energy, Imperial Oil, and Husky Energy. This report evaluates what the Paris Agreement means for the “Big Five” by estimating the social cost of carbon (SCC) of the oil and gas reserves of these firms and by assessing the emissions-reduction disclosures and targets, climate change-related policies, and material actions of the Big Five.

As publicly traded corporations, the Big Five work hard to deliver dividends to their shareholders by increasing oil consumption and externalizing costs. Calculating the SCC or carbon liabilities of oil and gas firms is a method that economists use to estimate the social and economic damages from emitting a tonne of carbon and, conversely, the benefit of reducing carbon emissions.

We calculate the carbon liabilities of the Big Five’s proved and probable oil and gas reserves based on three SCC estimates: the low estimate of $50 per tonne was used in previous economic research and is applied to the proved reserves only, while the middle and high estimates of $100 and $200 per tonne are used by the United Nations Global Compact and in previous economic studies respectively and are applied to both the proved and probable reserves.

The point of calculating the carbon liability estimates for the Big Five’s reserves is to show the enormity of these costs should these reserves be combusted, and to stress that most of the profits accrued by the Big Five and their shareholders, who are mostly not Canadians (as of July 2017), are “paid” by the public and the environment through coastal damage, extreme weather events, decreased food production, and negative health effects.

Our assessment of the emissions-reduction disclosures and targets, climate change-related policies, and material actions of the Big Five builds on a 2017 report from Moody’s Investors Service and is based on data from company annual reports, environmental and community reports, and climate disclosure reports.

There have been mildly positive emissions-disclosure and emissions intensity trends in Alberta’s oil patch in recent years. The Big Five have begun to disclose basic statistical data on the emissions intensity and total emissions attributable to their production of oil and gas, and Suncor, CNRL, and Cenovus have reduced the emissions intensity of their production as of late. However, all five oil sands majors forecast an increase in their total emissions in the future. All of the Big Five except for Imperial Oil acknowledge the Paris Agreement, yet none of these companies have made science-based targets that align with the amount of decarbonization required to keep the global average temperature increase below 2°C. The Big Five need to start publicly disclosing their emissions modelling for the sake of transparency and accountability.

As with their reduction targets, none of the Big Five have implemented material actions that are in line with decarbonization required to meet the 2°C limit. The Big Five’s hopes for future emissions decreases rely primarily on claims that new technologies will enable substantial reductions. However, technological advancements to date have not produced absolute emissions reductions, and there is no reason to believe they will. The only realistic way for the Big Five to reduce their total emissions is to reduce their oil and gas production. The Paris Agreement means that business as usual for the Big Five and other fossil fuel producers is not an option.

Getting to a low-carbon future entails subnational and national governments around the world placing immediate limits on fossil fuel extraction that will become increasingly stringent over time. Without added regulations and significantly higher carbon pricing laws, it seems unlikely that the global energy transition will develop quickly enough to keep global warming within the 2°C limit. The substantial gap between, on one hand, the Big Five’s disclosures, targets and material actions and, on the other, the changes required to remain within the Paris Agreement’s 2°C limit signals a need for concrete, long-term “wind-down” plans to address the challenges and changes resulting from global warming, including the fact that a significant portion of known fossil fuel reserves must remain underground. 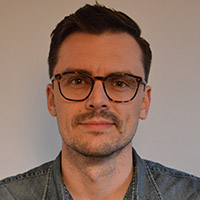 David W. Janzen is a recent PhD graduate of the University of Alberta. David’s interdisciplinary critical research examines conceptions of crisis, globalization, and environment. He has recent and forthcoming publications on Mayan anti-mining movements, political economy of crisis, and literature, as well as more experimental work on rhythmanalysis, sound, and ecology.