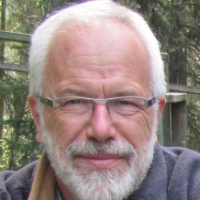 Roger Epp is professor of political science at the University of Alberta, where he has also served in a number of senior leadership roles, including that of founding dean of the University's Augustana Campus in Camrose. Much of his writing has explored what it means to live as a multi-generational settler in the prairie West – on Treaty 6 land – with a sense of memory, inheritance and care. Those explorations include the books We Are All Treaty People: Prairie Essays (2008) and Writing Off the Rural West (2001), the latter in association with Parkland, as well as a documentary for CBC Radio’s Ideas. He was an invited honorary witness at the Truth and Reconciliation Commission of Canada. A former newspaper journalist, his work has appeared in such diverse periodicals as the Western Producer, the Edmonton Journal, and The Globe and Mail. He is a former member of the Parkland Institute board.

Writing Off the Rural West: Globalization, Governments and the Transformation of Rural Life

Some of the most intense effects of globalization can be seen in rural communities. Despite a booming world economy, rural communities-and the people who work in natural-resource industries like farming, forestry, mining or fishing-have been hard hit by recent international trade agreements. This collection looks at changing rural life, across the country and around the globe.