The CD Howe Institute, a right-wing think tank, released a study last week by University of Alberta economics professor Joseph Marchand that claims, “Alberta’s move to increase its minimum wage to $15 an hour by [October] 2018 could lead to the loss of roughly 25,000 jobs.”

The prediction is the product of an economic model that doesn’t account for inflation and assumes job losses could occur for minimum wage workers of all ages.

Even if we accept the parameters of Marchand’s model—which I do not—taking inflation into account drops the forecast number of job losses by about 20%, to 20,750.

But, the more fundamental error in Marchand’s math comes from his assumption that minimum wage workers of all ages could lose their jobs as a result of the wage hike, when the best recent research on minimum wage hikes in Canada shows only a small percentage of jobs held by teenagers are at risk.

University of British Columbia economics professor David Green’s study on the BC government’s 28% increase to minimum wage in 2011 found a small decline of 1.6% of employment for workers under 25.

Green explains why the wild job losses predicted by business lobby groups and think tanks fail to materialize. He identifies two common mistakes minimum wage opponents make when interpreting the economics research. The first is assuming that estimated employment effects for teenagers apply to young adults (those aged 20 to 24). In reality, estimated effects for young adults and adult workers are effectively zero. The second is relying on old research based on 1990s data, while newer studies using the same methodology and data up to 2012 find much smaller employment effects from minimum wage hikes.

Returning to this week’s CD Howe report, if we take Marchand’s prediction, adjust it for inflation, and apply it to the teenage minimum wage labour force in Alberta, the result is a forecast of 2,000 job losses, or a mere 7.8% of his sky-is-falling prediction.

Doom-and-gloom studies like Marchand’s for the CD Howe Institute and a recent report on Seattle’s minimum wage increase are “swimming against a large tide of contrary results,” according to Lars Osberg, a former president of the Canadian Economics Association.

Osberg is one of 53 Canadian economists who recently signed a letter supporting the government of Ontario’s commitment to raise the provincial minimum wage to $15 an hour by January 2019.

“Economics may be known as the ‘dismal science,’” the letter states, “but on the issue of the minimum wage many economists are ready to admit that the weight of evidence points to a strong case for raising the minimum wage.”

There are, in fact, many benefits to raising the minimum wage, including a reduction in gendered income inequality—60% of workers making less than $15 an hour in Alberta are women.

Our province has the largest gender income gap in the country, and the government of Alberta should also consider implementing pay equity legislation to deal with discrimination against women in the labour force.

ATB Financial recently wrote, “Alberta’s love affair with eating out appears to be unstoppable because once again, that love has resulted in another record.” 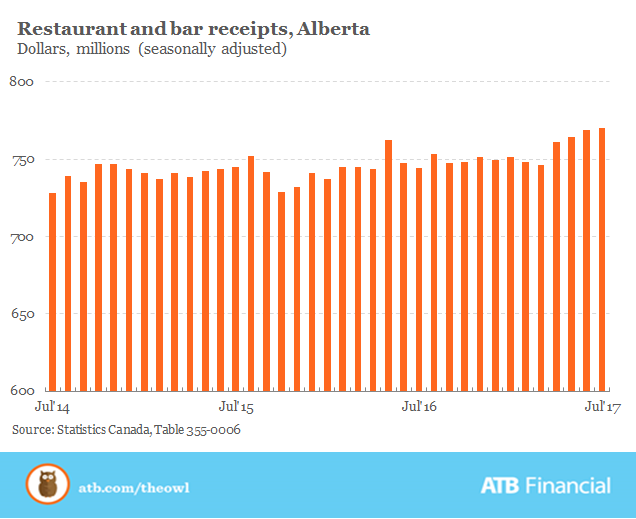 Right-wing think tanks like the CD Howe Institute are claiming that the Alberta economy is too weak right now to support a further increase to the provincial minimum wage, but our economy isn’t in recession anymore and, in fact, added 19,000 service sector jobs in the last year as part of our recovery.

Minimum wage hikes don’t hurt our economy, they help ensure more working Albertans share in the prosperity of our province.